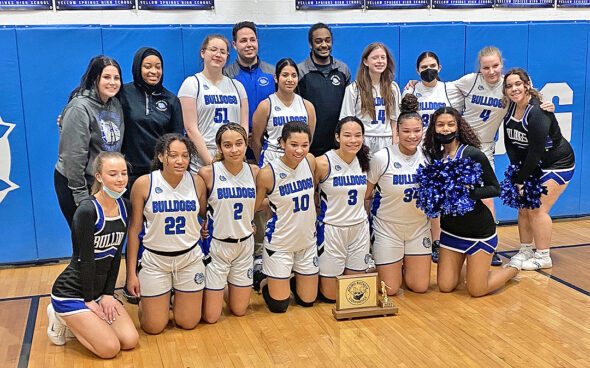 The Yellow Springs High School girls varsity basketball team, shown above, ended the regular season in first place in the Metro Buckeye Conference, tied with Legacy Christian Academy. The Bulldogs were 9–1 in the conference and 15–5 for the season overall. (Submitted photo by Allison Moody)

The Bulldogs secured their place with wins in their last two conference games Tuesday, Feb. 8, and Wednesday, Feb. 9, against Middletown Christian (70–51) and Legacy Christian Academy (66–46).

The final regular game of the season, a nonconference game against Ansonia on Saturday, Feb. 12, was a nail biter of a contest that went into overtime with the teams tied 45–45, according to Ansonia’s website. The final score of 52–50 was in Ansonia’s favor. A celebratory moment in the game came when senior DeAndre Cowen surpassed 1,000 career points. Other statistics for the game were unavailable at press time.

The Bulldogs ended the season 16–4 overall and have their first postseason tournament game on Wednesday, Feb. 23, against the winner of a contest between Cedarville and the Miami Valley School, both of whom Yellow Springs defeated in regular season play.

Cowen has been named Metro Buckeye Conference Player of the Year, and coach Nick Trimbach is conference coach of the year. 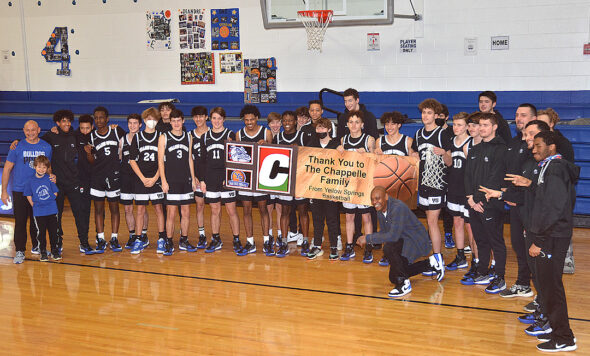 The boys varisty team also finished the season as co-conference champs, tying with Dayton Christian. After scoring over 1,000 career points, senior DeAndre Cowen, bottom right, was named the conference’s Player of the Year. Coach Nick Trimbach was named conference coach of the year. In celebration of the seasons’ successes, the boys team cut fragments of the gym’s net and posed with village resident and famed comedian Dave Chappelle, who purchased uniforms for the team. (Photo by Matt Minde)

The team plays its first postseason sectional tournament game against Newton High School on Thursday, Feb. 17, at Trotwood-Madison High School, according to the Ohio High School Athletic Association website. The Bulldogs last went up against Newton, a nonconference team, in their first game of the season in November, falling 45–37.

The Yellow Springs High School boys bowling squad had its final match of the season Thursday, Feb. 10, against Greenon High School, which toppled 2,282 pins to 1,878 for the Bulldogs, according to the Metro Buckeye Conference website. Junior Krishan Miller rolled two games over 200, knocking down 201 pins in each. Junior Luka Sage-Frebotta wasn’t far behind with 187 and 166 for his two games. Senior Max Sturgeon finished his season with 161 and 144.

The girls team went up against Dayton Christian on Thursday, Feb. 10, finishing with 1,118 pins to the Warriors’ 1,301. Top Bulldog scorer was senior Carley Brackney with games of 139 and 116.

The boys team was scheduled to play in the boys sectional tournament match Tuesday, Feb. 15, the results of which were not available at press time. The sectional match for the girls is scheduled Thursday, Feb. 17