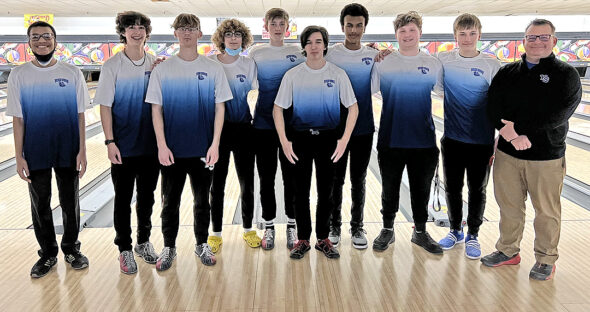 The Yellow Springs High School boys bowling team emerged from the sectional tournament meet on Tuesday, Feb. 15, with enough points to move on as a team to the district competition Wednesday, Feb. 23, marking the first time in school history that the entire squad has advanced to compete at the district level, according to school district Athletic Director Jeff Eyrich.

The team finished 11th out of 25 area schools competing in the Division II sectionals. The top 12 teams qualified to compete at this week’s district meet, the results of which were not available at press time.

At last week’s sectionals, senior Max Sturgeon led the Bulldogs with a three-game tally of 649 pins, finishing seventh out of 140 bowlers; and junior Krishan Miller had a high single game score of 256, finishing 22nd overall with a three-game total of 596. Other key performances were turned in by junior Luka Sage-Frabotta, who bowled two games; and junior Lucas Tumblison and sophomores Isaac Grushon, Eli Matteson and Kyle Raymer, each of whom bowled one game.

The Yellow Springs High School girls bowling squad competed in sectionals on Thursday, Feb. 17, finishing 23rd out of 25 teams. The top 12 teams moved on to this week’s district meet.

Senior Carley Brackney led the Bulldogs with a three-game total of 438 points, placing her 51st among the 143 bowlers and one pin shy of qualifying for the district meet as an individual. Other players were sophomores Haley Thompson, Siobhan McCann-Stewart, Violet Babb and Lily Kibblewhite; junior Angelina Tatman; and freshman Ayla Arnold.

The high school boys varsity team was set to play its first sectional tournament game on Wednesday evening, Feb. 23. The outcome was not available at press time.