Yellow Springs High School runner Cheyan Sundell-Turner earned two first-place finishes at the Greene County Invitational held at Greeneview High School on Thursday, April 21. The junior was victorious in the girls 1,600-meter (5:44) and 3,200-meter races (12:36), leading the girls squad to a sixth-place finish out of eight schools from across the county.

For the boys, senior Yanne Gilley leaped to a first-place finish in the long jump (19´ 7˝), as the boys squad also finished in sixth place.

Junior Malcolm Blunt earned multiple ribbons in the 400 meters (fifth), 200 meters (fifth) and long jump (sixth). Junior Sven Meister heaved the shot to a personal best effort while earning a solid fifth-place finish, and newcomer Kyle Raymer, a sophomore, hurdled to a fifth-place run in the 300 hurdles. Senior Joaquin Espinosa finished sixth place in the 110 high hurdles. The distance tandem of Malik Booth, Jack Horvath, Isaac Lewis and Jia Sundell-Turner all ran personal bests in the 800-meter relay with a sixth-place effort. Collin Calfee in the 100 meters and Evan Galarza in the discus and 3,200-meter race also put forth solid efforts.

On the girls side, Sundell-Turner was complemented by a bevy of Bulldogs with junior Josie DeWine finishing fourth in the 3,200-meter race while a host of first-year athletes scored additional points. Ninth-grader Liliana Herzog finished fifth in the 300 hurdles, with fellow ninth-grader Tiger Collins close behind in the same race, placing sixth. Collins also had two other scoring performances in the 100-meter high hurdles (sixth) and long jump (eighth). Ninth-grader Sophia Tatman had a first time effort in the discus and scored with an eighth-place toss. Two Bulldog relay teams earned sixth-place ribbons: the 400-relay group of Carla Harris, Asha Jackson, Gema Paz Brizuela and Maya Henderson and the 800-relay quartet of Devyn Deal, Jackson, Paz Brizuela and Henderson. Several members of the girls team were absent, which negatively affected the team’s final score.

Coaches Isabelle Dierauer and John Gudgel were excited with the overall effort and performance in a highly competitive meet. This meet is a fun experience for the Bulldogs, as they get a chance to compete against rival Greene County schools. The next meet is the Mechanicsburg Relays on Friday, April 29, followed by the annual Bulldog Invitational on Friday, May 6.
—John Gudgel, coach

To say it has been a rainy season would be an understatement. After a two-week layoff due to inclement weather, the Yellow Springs softball team finally was able to take the field Friday, April 22, hosting Tri-County North at Gaunt Park.

The Bulldogs fell behind in the first two innings, but settled down over the last three of the five-inning game, staying with their opponent behind the solid pitching of Violet Babb and triples to the fence by Babb and Ella Laws. The competitive play wasn’t enough to catch up, however, as the Bulldogs lost by a final score of 15–2.

The game was closer in spirit than the score would indicate, as the Yellow Springs team was outscored by just 4–2 over the final three innings. Tri-Valley North is the strongest team Yellow Springs will play this year, and the Bulldogs played hard the entire game, proving in the final innings that they could stay with a team of the Panthers’ caliber. The Bulldogs had several positive moments on both offense and defense, including diving catches by junior Halee Sparks in centerfield, senior Sophie Lawson at third base and senior Carina Basora at second base. Sparks flawlessly handled four chances in centerfield and Lawson gobbled up every ground ball hit her way.

On offense, sophomore sluggers Babb and Laws contributed triples, and speedsters Lawson and senior Lily Rainey used their speed on the bases to produce two runs. The offense is balanced with two players at the top of the batting order — Lawson and Rainey — who can get on base, and two players — Babb and Laws — who are gap hitters able to drive the ball and produce RBIs.
After multiple rainouts, Yellow Springs is scheduled to begin Metro Buckeye Conference play this week against Middletown Christian and Dayton Christian. The conference teams are balanced in their abilities this year, and time will tell where Yellow Springs ends up ranking in the league.
—Jim DeLong, coach

The Bulldogs traveled to Trotwood-Madison on Wednesday, April 20, in a game that was previously scheduled to be played at home. Senior Krishan Miller toed the rubber in his first start of the year. It was worth the wait, as he pitched a complete game while striking out seven Ram batters and giving up only two hits. 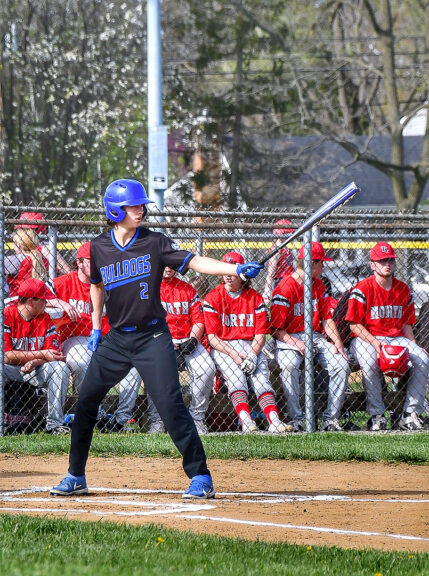 YSHS sophomore Isaac Grushon bats in a home game against Tri-County North on Friday, April 22. The Bulldogs saw solid pitching performance seemed within striking distance for most of the night, but they ultimately fell, 0–14. (Photo by Michael Knemeyer)

The Bulldog batters joined the party by scoring runs in every inning. The final score was 18–4. The lead-off hitter, junior Eli Eyrich, reached base in every at bat, adding four stolen bases to his season total, and scoring three times. Sophomore Isaac Grushon continued his blistering pace by knocking three hits, getting on by an error, stealing two bases, scoring three times and earning four RBIs. Also reaching base multiple times were Antonio Chaiten, Josh Clark, Jake Ortiz-Thornton, Miller, Shawn VanHoose and Sam Miller. Brady Baker supported Krishan Miller behind the plate as he continued his strong play at catcher with some great hustle and gunning down a would-be base stealer at third base.

The weekend was hot, but the bats went cold as the Bulldogs managed only two runs in three games against the Tri-County North Panthers, the Newton Indians and the Houston Wildcats, each of whom is ranked in the state.

Friday, April 22, saw a solid pitching performance by Clark. After giving up a leadoff home run, he settled in nicely and kept the Bulldogs in striking distance for most of the night. The hometown crowd was a welcome sight for the road-weary team. Several of the long-time fans commented about how improved the Bulldogs looked as they battled hard all night. The few scoring opportunities for the Bulldogs were stifled by excellent pitching and defense on the part of the Panthers.

Saturday, April 23, brought another road trip for the team as they traveled to Newton to play two games, facing the host Indians in the first game and the Wildcats in the second.
Freshman Hazen VanMeter got the first start of his career and made the most of it. He logged a strong five innings while scattering seven hits.

“I told him to just get in there and throw strikes. When you do that, good things happen,” pitching coach Sam Jacobs said.

VanMeter did just that, and Eyrich came in to close out the final inning by giving up no hits and earning a strikeout. Ortiz-Thornton stayed hot at the plate by drilling two base hits as Clark, Grushon and VanHoose each added one of their own.

“We got beat, but we certainly got some good feelings out of this one,” coach Mitch Clark said. “That team beat us up pretty bad last year, but we showed them something this year.”

The lopsided 11–2 final didn’t seem to tell the whole story, as the Bulldogs held their heads high and celebrated with VanMeter for his strong showing.

Houston ended the double-header with an attitude. They came in seeming to have a chip on their shoulder after not being able to play a game for a while, due to weather. Their left-handed ace shut down the Bulldog bats, while they put the ball in play time after time. Ortiz-Thornton led the hitting in this one as he took out his frustration on the baseball. The bright spot came when coach Jacobs called on freshman Lucas Price to close out the game. He provided two strong, much-needed innings, giving up only three hits and no runs. His efforts saved the team’s pitching starters for the following week’s match-ups against conference opponents.
—Mitch Clark, coach

The mighty Bulldogs had a 3–0 sweep in their matches last week, advancing to a 7–3 record for the season.

Next up, another sweep, winning all of the courts against Northeastern on Wednesday, April 20. The victors in this match were Smith-Heston, Ethan Knemeyer, Aiden Scavone in singles, and doubles teams of Jason Knemeyer/Onfroy-Curley and Liam McClean/Luka Sage-Frabotta.

The third match was Thursday, April 21, against Legacy Christian, who had previously bested Yellow Springs early in the season. But this time the Bulldogs were able to take care of business and secure the win. Ethan Knemeyer won his singles match, as did the doubles teams of Jason Knemeyer/Onfroy-Curley and McClean/Scavone.

A match against. Stivers was canceled due to rain. The squad is nearing the end of the regular season, with the intent to reach peak performance for the sectional tournament in early May. Fan support at our home matches has been great. Please continue to cheer on the Bulldogs as they close out the season with just two weeks left.
—Stacey Knemeyer, coach