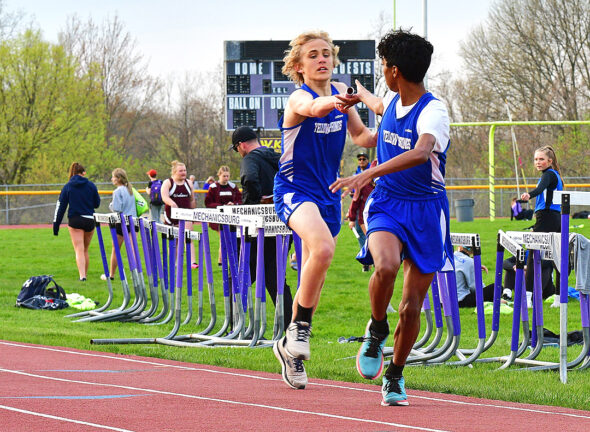 YSHS freshman Jia Sundell-Tiurner hands the baton to sophomore Malik Booth during the 400-meter relay at the Friday, April 29 meet at Mechanicsburg. (Photo by Kathleen Galarza)

Let’s get the bad news out of the way. The Bulldogs fell short in matches against Valley View and Miami Valley School last week, but the contests were not without silver linings. In the Valley View match, Tuesday, April 26, Henry Smith-Heston and Ethan Knemeyer each secured wins in straight sets. Ethan remains undefeated going into the last week of matches at 12–0. Friday, April 29, was also a rough day for the Bulldogs in their match against Miami Valley. With half the varsity roster out for a soccer tournament, the tennis squad did not have enough to win the Miami Valley match. Ethan and Jason Knemeyer won their doubles match, though, dominating in straight sets.

The good news is first singles player Henry Smith-Heston and first doubles pair Ethan and Jason Knemeyer each placed with seeds for the sectional tournament in Troy next week. Smith-Heston received the number-three seed, having beaten formidable opponents Valley View, Centerville and Waynesville. Ethan and Jason Knemeyer placed as the number-one seed in a unanimous decision with coaches commenting that the Knemeyer pair is hands down the best in the section.
Before the team gets to tournament play, however, the Bulldogs will finish out this week with matches against Beavercreek (Tuesday, May 3, away), Greenon (Wednesday, May 4, home), Greenview (Thursday, May 5, away) and Miami Valley School (Friday, May 6, home). Please come support the Bulldogs, especially Friday as they try to upset Miami Valley for their first team win against the Rams in over a decade. GO BULLDOGS!
—Stacey Knemeyer, coach

Returning to the Mechanicsburg Relays after a three-year hiatus, the Yellow Springs boys and girls track and field squads performed admirably during the event Friday, April 29. The boys as a team came in fifth place out of nine schools, while the girls placed ninth.

Leading the boys effort with a first-place medal was senior and newcomer DeAndre Cowen, who established a personal best in the high jump with a 6´2˝ effort. Junior Malcolm Blunt teamed with Cowen in the high jump, and both young men also won medals in the long jump. The sprint medley quartet of ninth-grader Collin Calfee, Blunt, Cowen and ninth-grader Kyle Raymer sped to a runner-up finish, while the 800-relay team of Blunt, Cowen, Raymer and senior Joaquin Espinosa also earned second-place in their event.

The distance crew of Malik Booth, Jack Horvath, Isaac Lewis and Jia Sundell-Turner placed sixth in the 3,200-meter relay; and Booth, Horvath, Lewis and Raymer came back in the 1,600-meter relay, also with a sixth-place scoring effort. In a special event titled the 400 Ironman Relay, which consisted of discus and shot put throwers, the hefty group of Calfee, Espinosa, Evan Galarza and Sven Meister scored a fifth-place sprint, completing a total team effort in which every Bulldog on the boys side scored a point at the meet.

The Bulldogs will be at home on Friday evening, May 6, for the annual Bulldog Invitational. Field events start at 5 p.m., and running events will begin at 6 p.m.

In other recent track competition, the distance duo of DeWine and Sundell-Turner competed Thursday, April 28, at the Wayne Invitational, which is the largest high school meet in Ohio. Both Sundell-Turner and DeWine ran season-best efforts in the 3,200-meter run.
—John Gudgel, coach

The 2022 Fastest Bulldog 100 Meter competition for Mills Lawn and Antioch School Elementary School students will take place on Wednesday, May 11, at the Yellow Springs High School track. The event begins at 4 p.m.

Each participant will receive a ribbon, and trophies will be awarded to the fastest Bulldog boy and girl. There is no entry fee and no sign up needed — just show up. This event is sponsored by the Southwest Ohio Track Club. Contact John Gudgel at jgudgel@ysschools.org for more information.

The loyal fans that made it out to Gaunt Park on Monday, April 25, were rewarded with the most exciting baseball game played there in recent memory.

Parents, friends, long-time supporters and even members of the softball and tennis teams surrounded the backstop as they rooted for the Bulldogs who fought tooth and nail against Metro Buckeye Conference opponent Middletown Christian.

Junior Krishan Miller started the game on the mound and blanked the Eagles in the first inning, using pin-point accuracy and trusting his defense. The defense was up for the challenge with solid plays by freshman Lucas Price, in his first start, and Josh Clark, in his first start at second base, after moving from third base.

The Bulldogs started the bottom of the inning quietly until hot-hitting Isaac Grushon came to the plate with two outs and determination in his eyes. He and Jake Ortiz-Thornton each rapped a hit and awaited Miller to get to the plate to drive them home. Miller did just that, with a massive shot over the left fielder’s head, which resulted in a double that plated Grushon and Ortiz-Thornton. Shawn VanHoose, DeAndre Cowen and Brady Baker followed with hits of their own as Cowen’s long double scored Miller.

Miller went to the mound in the second inning with a solid 3–0 lead. He again took care of business, shutting down the Eagles hitters and maintaining the lead. The Bulldogs couldn’t add to their lead in the second inning, so it was up to Miller to continue to hold that lead. The Eagle bats woke up a little, with help from a tight strike zone, as they managed to tie the game at 3–3. The Eagles took the lead in the fourth inning as Miller gave up one more run, while the crowd anguished over close plays on the field that did not go the Bulldog’s way. Down 4–3, but determined to persevere through adversity, the Bulldogs loaded the bases for the ultra-confident Ortiz-Thornton. His confidence once again proved to be on target as he blasted a bases-clearing double to score the three baserunners. By the time the inning was complete, the Bulldogs were up 7–4 and feeling quite good about themselves.

Miller grinded it out the next couple of innings as the vastly improved defense worked hard to keep the Eagles from scoring. He helped himself with a fine pick off move and great tag by first-baseman VanHoose to erase the threat. The consistent play of Baker behind the plate almost goes unnoticed at this point, due to his consistent hustle.

“That kid has grit and will do whatever it takes for his team,” hitting coach Phil Renfro said.
An outfield assist to cut down another Eagle threat came from the speed and rifle arm of Eli Eyrich to Clark, the sure-handed second baseman.

In yet another gem of a play, outfielder Ortiz-Thornton cut down an Eagle runner trying to score on a hit to left field. Ortiz-Thornton was having none of it, as he charged hard to get the ball and unleashed an amazing throw to the waiting wall known as catcher Baker, at the plate. Baker put down the tag and left his gear behind, as he went to celebrate the play with his teammates.

All starters had a hit except Price, who contributed with two walks in three at-bats. The ultimate pinch runner, Antonio Chaiten, came in to run for Price and promptly scored, putting the Bulldogs up 8–7 with one inning remaining.

When Miller hit his pitch count in the seventh inning, pitching coach Sam Jacobs reluctantly pulled him from the mound. Fortunately, shortstop Grushon had just made an ESPN-worthy leaping snatch of a line drive to record the first out of the inning. He was pumped and ready to relieve Miller as they swapped defense positions. It didn’t take long, as Grushon pumped in fastballs with a vengeance to record two strikeouts for the save and sealed the victory, without the home team having to complete the bottom of the inning.

The team and the crowd reveled in the hard-fought conference victory. A former player, current parent and long-time supporter commented, “Amazing game, coach! It was the best game I’ve seen them play in the past five years.”

On Tuesday, April 26, the inevitable emotional letdown caused the Bulldogs to have a very slow and sloppy start to their game against the Emmanuel Christian Lions. Josh Clark started on the mound and held the Lions to six runs over the first five innings, while the Bulldogs managed to eke out only two runs. That is, until they came to the plate in the bottom of the fifth inning, determined to not let the opportunity slip away to get back-to-back wins against conference opponents.

Coach Mitch Clark decided to try to make something happen with lead-off hitter and known speedster Eyrich coming up to bat. Eyrich laid down a perfect bunt and beat it out, while his teammates cheered him on, as he scampered down the line. With the emotion of the play breathing life back into the Bulldog bench, they went on to score five runs, as Grushon, Ortiz-Thornton, Miller and VanHoose had consecutive hits. Yanne Gille and Cowen each added a hit of their own, after a strikeout, to make it two outs in the inning.

Clark, closing in on his pitch count, went to the mound in the top of the sixth inning. It didn’t start well, as he walked the first two batters. Pitching coach Jacobs, pacing behind the bench, decided to leave his pitcher in the game and let him work out of trouble. This turned out to be the right call as Clark shut down the next three hitters to give the Bulldogs a little breathing room.

That small opening was blasted wide open in the bottom of the sixth inning as the Bulldog hitters went wild. All nine hitters reached base at least once, and the game was put away when Miller drilled a bases-loaded double, scoring all the runners, to finalize the rare come-from-behind run rule.

“This really shows the heart and character of this team,” hitting coach Renfro said. “They fought through adversity, but never gave up.”

The next game was Friday, April 29, against the same Emmanuel Christian Lions at their place.
Facing yet another game with adversity, the Bulldogs traveled to Emmanuel Christian missing six of their players due to injury and other sporting commitments. The Bulldogs fought hard and never gave up, but just could not overcome the early lead amassed by the Lions.

The Bulldogs scored in the first when Ortiz-Thornton knocked in Grushon, but could not plate a run for the next three innings, as the Lions scored three in the first, two in the second and two in the third. Sophomore Chaiten garnered his first career hit in his first start and scored, along with Grushon, as Miller rapped another hit to add to his season’s total. Ortiz-Thornton came in to relieve Miller and gave up one run over the last two innings while Miller drove in another in the seventh with a strong double. The Bulldogs’ Conference run stopped at two as the Lions bested them with a hard fought 8–4 victory.

The hometown team will get another chance to better their conference record when they meet the Legacy Christian Academy Knights on Tuesday, May 3, at Gaunt Park and Thursday, May 5, at the Athletes In Action’s field. A rematch with Trotwood Madison is sandwiched in between those games, and a nonconference game against Tri-Village is slated for Friday, May 6, at their place.
—Mitch Clark , coach