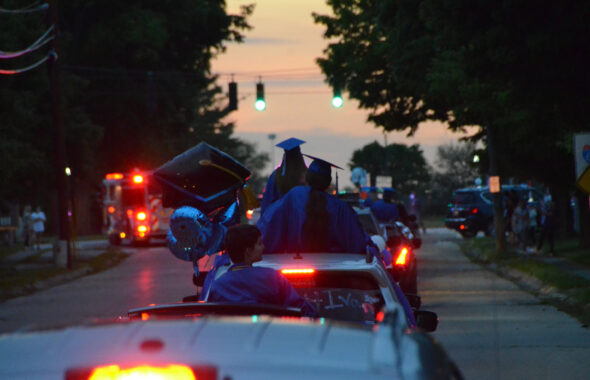 Contingent on the weather is the graduates' car parade — a tradition that began with the graduating class of 2020. If the weather holds, the parade will depart from the high school at 8 p.m. and will flow through the village. (News archive photo by Matt Minde)

Update, Thursday, May 26: Due to rainy conditions, the graduation car parade has been canceled. Commencement will continue as planned at 8 p.m.

The Class of 2022 will take its final bow at graduation on Thursday, May 26, at 8 p.m. in the Yellow Springs High School gym.

The school will inform parents and students with text notifications and other social media posts.
This year’s commencement speakers are graduating seniors Joaquin Espinosa and Sophia Lawson, will speak on celebrating the years their class has spent together and the uniqueness of both Yellow Springs and of the class of 2022.

Espinosa has attended YS Schools since seventh grade, and upon graduation, will join the U.S. Navy with plans to work in the nuclear field. Lawson has attended YS Schools since elementary school and plans to attend The Ohio State University and major in biochemistry. The two students were chosen to give commencement addresses by the graduation speaker selection committee: Principal Jack Hatert, counselor Dave Smith and district librarian Eli Hurwitz.

A number of seniors earned Latin honors and are graduating with a variety of scholarships and awards.

The YS News congratulates each and every one of the graduating seniors — and as always, Go Bulldogs!

One Response to “Celebrate YSHS Class of ’22”