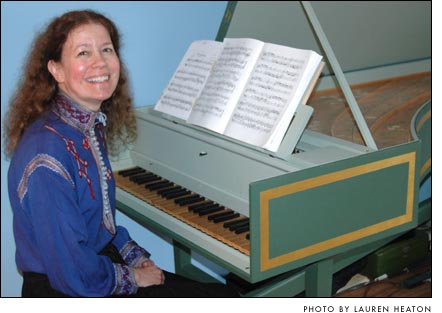 Mary Fahrenbruck will perform early music on the harpsichord on Saturday, April 5, at noon at Antioch University McGregor’s National City Auditorium. The concert and lecture about the harpsichord, built by Ray Olds, is one of three events to inaugurate a revival of the Early Music Center in Yellow Springs.

Pat Olds first started the Early Music Center in Yellow Springs in 1979 shortly after learning she had multiple sclerosis. A professional cellist, she was devastated that she could no longer perform for an audience. But she soon found that she could still play the viola da gamba, a family of early music instruments that can be half to a third the size of a cello. And so she got to work organizing a center where she could perform in ensemble and teach others to play simple music on affordable instruments.

Now, at 75, Olds is facing the challenge of having just moved into an independent living unit at Friends Care Community. And her response is to get back into music, early music to be specific, by informally reviving the Early Music Center for the teaching, performance and love of music.

“It’s something to keep me off the streets, or out of jail, or out of old age,” she said. “It’s the renaissance of the Early Music Center.”

A series of three performance and lecture events this month at the Antioch University McGregor National City Auditorium will mark the center’s reinauguration. Beginning on Saturday, April 5, at noon, pianist Mary Fahrenbruck will perform works on the harpsichord by early music composers William Byrd, Thomas Morley, and J.S. Bach. Following the concert, retired Wright State University music professor Dan Duncan will talk about the history and construction of the harpsichord, along with Ray Olds, who built one for the EMC in 1980, and Dan Taylor and Pierre Nagley, who helped restore it to its present condition.

The second event on Saturday, April 12, also at noon, will focus on the viol, an early version of the violin and another common early music instrument. Local instrument repairman Ray Lewkowicz, otherwise known as the Violin Doctor, will talk about what makes a fiddle fit, while Yellow Springs High School student Robbie Marion will demonstrate with selections from bluegrass and Irish tunes.

Lastly, at noon on Saturday, April 19, a Broken Consort of vocalists, woodwind and string musicians, including Kitty Jensen, Duncan, Olds and possibly others, will perform a variety of early music selections on copies of original instruments. The EMC’s harpsichord, for example, was built from a kit designed after the 1680s Flemish school model.

Early music refers to the music that came before the classical period, or music from the Medieval, Renaissance and Baroque periods, roughly from the 12th century through 1760, the date of Bach’s death. The sounds at the time, played on instruments such as the recorder, viola da gamba, lute, dulcimer, sackbut and crumhorn, consisted largely of single melody parts that were more regular in meter than the more sophisticated compositions by Mozart and Beethoven that followed.

“Gregorian chant is where it all began, but it’s the Renaissance music of the 14th century that contains the most complicated and sublime polyphony, followed by Palestrina’s madrigals and other choral works from the 15th through the 17th centuries,” Olds said.

According to Fahrenbruck, a master of 20th-century expressionists such as Arnold Schoenberg and Anton Webern, the charm of early music is in its simplicity. Fahrenbruck, who taught piano and music theory at Central State for 30 years, has played Handel’s “Messiah” with the Lebanon Symphony for the past 12 years and has enjoyed returning to the basics with clear harmonies and a finite range of pitches, she said.

For Olds, part of the draw to early music was its accessibility for those who have never played an instrument before. And the fact that, even with limited physical capability, she could still play, encouraged her that anyone with interest could pick up a $10 recorder and learn about the foundations of modern music.

Olds was also a teacher at heart, having taught English at Wright State University and initiated the first viola da gamba major there. And when she retired in 1985, the Early Music Center became a major focus, drawing in as many as 22 students to her house in a 10-week term. At the end of each term was a concert, given by the students and an ensemble of the teachers, including Olds on the viola da gamba, Mike -Mattimore and Ed Sabrack on recorders, and Jim Dill on the harpsichord, sackbut or whatever else was needed.

The present Early Music Center is not incorporated as a nonprofit group as its predecessor was, but Olds still hopes that through donations and interest from area musicians or musicians-to-be, the center can again bring a not-so-popular kind of music back to life.

One Response to “Early music renaissance in village”