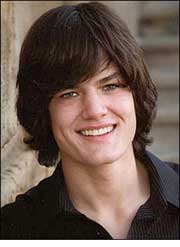 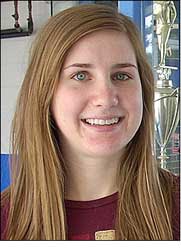 While Kyle Buchwalder, the Yellow Springs High School Class of 2008 valedictorian, was interviewed for this article via e-mail because he is currently an American Field Service exchange student in San Miguel de Tucuman, Argentina, and salutatorian Megan Kaplon was interviewed at home in Yellow Springs, they share the distinction of having both been named Wendy’s High School Heisman Scholar Athletes.

Buchwalder is the son of Dawn and Steven Buchwalder and has a twin brother Max, who will also graduate this year. He is a lifelong resident of Yellow Springs and came up through the Yellow Springs schools. Kaplon, the daughter of Judy Parker and Mike Kaplon, moved to Yellow Springs, her mother’s home town, from Johnson City, Tenn., at the start of her junior year.

All of Buchwalder’s outstanding memories have to do with soccer, he said.
“I enjoyed the science classes that I took, but more than anything else I’ll remember playing soccer. Soccer was always something I did with my friends and for this reason I think it was important for me,” he said.

The liberal atmosphere and the fact that the teachers were not obsessed with enforcing rules were some of the things he liked about YSHS.

“More than anything else, though, I like that the school day starts at 9 a.m. After waking up at 6 every morning here in Argentina for school, I have begun to appreciate that aspect of YSHS,” he said. The drawback is that “the school doesn’t have a wide range of classes, but that can’t be helped.”

Besides four years of soccer, Buchwalder participated in tennis, basketball, the one-act plays, ski club, school forest, the quick recall team and bowling club. He is a member of the National Honor Society and received the Rensselaer Medal for outstanding high school junior science students and the Bausch and Lomb Honorary Science Award.

He will be attending Colorado College and expects to volunteer for the Peace Corps. Beyond that, Buchwalder has no real plans.

“It’s too early for me to make decisions now,” he said. “I’m a procrastinator.”
More than anyone else. according to Buchwalder, his brother Max has influenced him.

“We’ve both always been competitive with each other and this is one of the reasons that I think I’ve always tried in sports, school, etc., “ he said. “My parents have also influenced me in this same way, but they’ve also made me love the outdoors, sports, and science.”

Unfortunately, Buchwalder will miss the graduation ceremony due to his commitment in Argentina.

Kaplon said that even though she started at YSHS half-way through high school, the fact that this is her mother’s home town made it easier for her to join in due to a support network of friends and relatives. She played both soccer and volleyball in the fall and is playing club soccer this spring. Playing sports made it easy for her to make friends, she said. After having attended a high school with 2,500 students, YSHS was a pleasure.

“Everyone knows everyone here,” she said.

Her favorite teachers are physics teacher Phil Lemkau and English teacher Elizabeth Lutz. This diversity of interest reflects her attitude as she goes off to college at Carnegie Mellon University, her mother’s alma mater. She plans to start out in the Community and Social Sciences College, which she describes as the university’s liberal arts program, but the fact that the school is strong in sciences leaves open the option of switching to her other interest. Her older sister, Rita, is at Oberlin College.

The advantage of attending YSHS, she said, is that it is “small, close-knit, and friendly.”

“It’s easy to get involved in lots of things, such as athletics and theater.” she said. “Everyone needs you. That makes it easy to meet people.”

The downside of this smallness is that there are fewer offerings of courses for study. However, she said, students can make up for that by taking courses at local colleges, as she did.

Kaplon is a National Merit Scholarship Commended Student and a member of the National Honor Society.