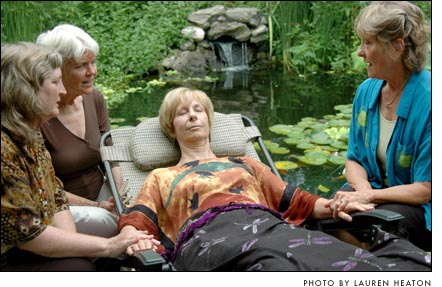 Local Threshold Choir members, from left, Teresa Sapunar, Sylvia Carter Denny, Paulette Olson and Mary Donahoe sing to each other when they rehearse.

Women’s Threshold Choir sings for healing and for pleasure

Their voices floated in with soothing softness and a power to calm the rumbles of anxiety. Sylvia sang as close as a mother to her baby, while Mary cooed her part and Theresa led the choral rounds from an arm’s length away. Taking it all in from her throne in the Zero Gravity chair, Paulette, with an inner smile, felt at that moment that everything was right with the world.

Theresa Sapunar, Mary Donahoe, Paulette Olson and Sylvia Carter Denny are four members of the Yellow Springs Threshold Choir. They are not performers but part of a group of 20 local women who sing to heal others in times of transition, especially the transition from life to death.

“There is such a sacred connection through singing,” Sapunar said. “When we sing at bedsides with friends and families of a loved one, it’s a beautiful way of expressing feelings and also feel that you’re giving and helping them along their way.”

The original Threshold Choir was founded in Tomales Bay, Calif., in 2000 by long-time singing circle leader Kate Munger, who wanted to provide a service in the ancient tradition of women singing at the bedsides of those struggling with life or with death. The choirs quickly multiplied, and now there are over 100 choirs across the U.S. and Canada, each led locally but adhering to Munger’s principles that the choirs be service oriented and its members trained to sing the songs by heart and provide comfort for others without faltering.

Still in its infancy, as choir members described it, the local Threshold Choir formed a year ago when Sapunar invited Munger, a friend of hers, to lead a workshop for women in the village. Since then a core group has met every other Sunday in each other’s homes to build a repertoire from the simple Threshold music and practice singing to each other, as though at the bedside.

Small groups of choir members have sung to Friends Care Community residents, to babies in the preemie ward of an area hospital, to Donahoe’s mother at Elmcroft assisted living in Xenia and at the bedsides of several local residents who have died in the past year. The group also sings to people in absentia, such as choir member Diantha Rau during a recent surgery and to the victims of the tsunamis in Southeast Asia and the soldiers and citizens of Iraq.

And this summer, Donahoe and Olson took advantage of an opportunity to take their songs across the Pacific with 14 of their national Threshold Choir sisters on a three-week mission to bring praise to an elephant sanctuary in northern Thailand and to connect with the Senang Hati Foundation, a service organization for children with disabilities in Bali.

No matter where they sing or who they sing for, the experience of singing to heal has been transformative for both giver and receiver, Threshold Choir members say. The words “comfort,” “peace,” “compassion” and “love” that are often used to describe what the singing evokes seem insufficient for a feeling that is primordial, innate. And because the use of the voice is so close to the life-giving breath, to heal and soothe is intuitive and, for many choir members, came well before Munger organized her first choir.

“I was a body-oriented psychotherapist, and when she was dealing with upheaval in her body, the chants and songs helped her to go deep inside herself, and to relax into the next space of her journey,” Sapunar said. “The choir was a perfect fit for what I already knew was so powerful for people.”

Choir member Laurie Dreamspinner learned about the power of non-verbal connection as a younger adult caring for her grandmother, who was dying of cancer. Feeling helpless at first and unable to talk about things that no longer seemed relevant to a person facing death, Dreamspinner was giving her grandmother a bedbath when she realized that touch was the kind of connection that was most needed at that moment.

“Words are not something you need to say in the middle of that process — touch made it possible to connect, and I never forgot that,” she said.

Later applying what she had learned, Dreamspinner requested some of the choir members sing for her mother, Ellie Dale, in the weeks before her death in February of this year. The first time she heard the soft voices, “she got this beatific smile on her face, and it was clear that this was striking some important chord with her,” Dreamspinner said. The songs calmed the fears and anxieties Dale had about death, and it gave Dreamspinner and her family a way to be helpful and to feel joy and relief from their own stress.

Some of the Yellow Springs singers became aware of the possibility for their own transformation through singing during their travels to places where the very rhythm of life invoked the same calm and spiritual feeling as the singing. At the Elephant Nature Park in northern Thailand, Donahoe and Olson went into the river to wash and sing to elephants who were there to be retrained through positive reinforcement, rather than the traditionally violent ways of taming elephants as laborers. And in the very religious culture of Bali, the Hindu ceremonies and offerings that dominated daily life inspired the whole group of women to sing in the streets, shops and the airport to their hosts, travel guides, and even a government official who was giving them a bit of trouble.

“All the land in Bali is holy because to them, everything has consciousness — I’ve never been anywhere where everything is sacred,” Donahoe said. “Our singing brings up the holiness of things, and reminds you of the soul in everything and of the importance of taking time like they do in Bali.”

For Olson, traveling to a sacred place with just women and singing with such warmth and caring, honored the feminine in a way that she had not felt before. As an economics professor at Wright State University, she had traveled extensively to Vietnam, Malasia and Southeast Asia with an intellectual orientation, she said. But going there with women with a very feminine purpose validated the labor of caring, of giving and healing, she said.

The Threshold Choir is an all women’s choir, and was meant to be that way for several reasons, Sapunar said. According to Munger’s ideas, female voices invoke the spirit and memory of the mother who brings life into the world. There is very little ego with the choirs, whose soul focus is the person being sung to, or comforted. And there is no judgement about musical abilities, commitment to the group or even timeliness, Sapunar said. There is no such thing as being late for rehearsals, for example.

“It’s important to be on time, but it’s important to let go of it if you can’t be,” Carter Denny said. “There’s not a lot of talk about right or wrong — it all seems pretty right.”

And being a member of the choir is as much about having a safe space “with your sisters” for personal healing as it is about comforting others, Sapunar said. When the group sings, molecules join one another, and seep into the cells of others to heal through the vibrations and the messages of the words too, she said.

“We all go away feeling healed — singing is healing,” Olson said.

The Yellow Springs Threshold Choir meets every other Sunday for an hour and a half to rehearse their inspirational music. For information about joining or using their service, contact Theresa Sapunar at 767-8897. Kate Munger is scheduled to return to Yellow Springs on Oct. 11 and 12 to give another workshop for women of any age who are interested in singing or being part of the Threshold Choir.