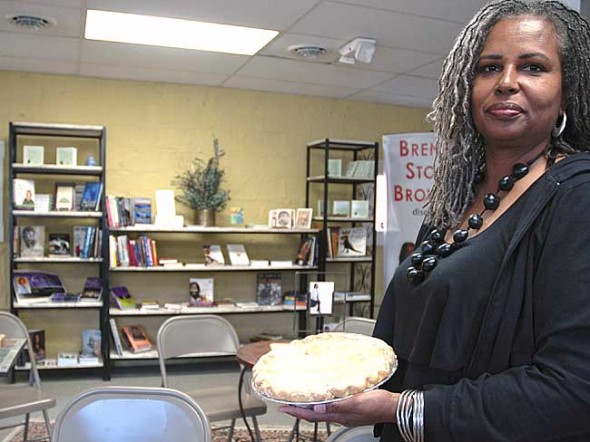 Books and cobblers at new cafe

At the new Rolling Pen Book Cafe, patrons can relax, read a book and enjoy a cup of coffee with some homemade cobbler.

Newly opened in the space formerly occupied by Dolbeer’s Cleaners, the book cafe is the vision of Springfield residents Brenda Stone Browder and her husband, Loren.

According to Browder, who is also an author and publisher, each bookstore in town has its own personality, and theirs will feature inspirational and Christian works in addition to frequent book readings and signings with local and outside authors.

“The focus is on anything that will enlighten, empower, elevate and inspire,” she said. “I’m not here to compete — it’s to bring another aspect of a bookstore here.”

The grand opening of the book cafe will run from Sept. 14 through Sept. 18, with special music on Friday night, Sept. 17.

Also featured will be Browder’s cobblers — available in peach, cherry, apple and blackberry — which she has sold at Street Fairs for several years.

Browder, the author of On the Up and Up: A Survival Guide for Women with Men on the Down Low, will also run a publishing company from the storefront called Sword of Truth Publishing and is looking for local authors of inspirational works.

“I feel I have a calling in life to assist people in publishing their books,” said Browder, also a former reporter for the Springfield News-Sun and former owner of a bookstore in Springfield. “That’s what makes the place unique — it’s not another coffee shop, it’s a full-circle book store.”

Browder said she hopes to create an inviting, livingroom atmosphere in her book cafe so patrons can put up their feet and enjoy a tranquil space to read the paper and splurge on a cobbler. The selection of books, now mostly inspirational titles, may change based upon her customer’s tastes.

“I want to get a feel for what people are reading, and whatever people tend to gravitate toward is what I’ll get,” she said.

One of the available titles is Browder’s On the Up and Up. The book chronicles her life with ex-husband J.L. King, who slept with men during their marriage, and imparts a message of forgiveness and healing.

“You can live again — you can love again,” Browder said of the book’s message. “Even though you’ve been deceived and lied to, you have to move on and forgive.”

When the book came out in 2005, Browder became a media sensation, appearing on more than 100 radio shows in addition to CNN, the “Montel Williams Show” and NPR.

“The book deal was a life-changing experience, not just for me but to empower women and inform the public about being safe sexually and guarding their heart,” said Browder, who had unintentionally started a movement about men on the “down low” with King, now a New York Times bestselling author.

Just last week Browder was interviewed on the “Oprah Winfrey Show” for a program that will air later in September. The television appearance comes ahead of her latest book, co-authored with King, It Takes Two: Loving, Divorcing and Moving On, and was the culmination of a long-held dream to tell her story, Browder said.

“I thought I’d never get a chance to get on Oprah,” she said. “To be on TV to spread this message of hope and forgiveness — I think the show will make a great impact.”

Browder also looks forward to the opening of her book cafe in a community she loved to ride horses in as a child and later to hike in the Glen as a student at Central State University.