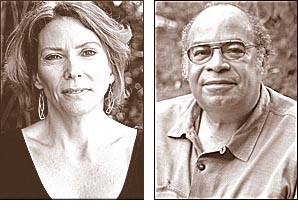 Karen Wintrow of the Yellow Springs Chamber of Commerce and Mark Crockett of Community Resources traveled to San Antonio, Texas, last week to meet with Air Force employees who may relocate to the Dayton area through BRAC.

When Yellow Springs Chamber of Commerce Executive Director Karen Wintrow learned that the Dayton Development Coalition, or DDC, was considering a trip to San Antonio, Texas, to try to convince residents whose jobs were being moved to Wright-Patterson Air Force Base to move to the region, she decided to get aggressive. According to Wintrow, she first got wind of the DDC effort through her connections as Village Council liaison to the Miami Valley Regional Planning Commission. That was about six months ago, when the planning was still in its infant stages. Wintrow reached out to the DDC with the concept of Yellow Springs as a regional partner.

“I argued how important Yellow Springs is to the region, because it is so different,” Wintrow said.

In the end, many communities in Greene County and major Dayton area cities were represented, she said. “We were the smallest.”

“It went great!” Wintrow said of the four-day trip in a recent interview. “There were about 500 interested people there, both military and civilian employees. I felt very positive feedback.”

The Brooks base is scheduled to close in 2011 as part of the BRAC realignment initiative. According to a Sept. 22 article in the Dayton Daily News, Wright-Patterson will see a net gain of about 1,100 jobs, including hundreds of aerospace medicine and human performance research jobs that will come from Brooks as a result of BRAC decisions. Wright-Patt was the beneficiary of the largest number of jobs from the realignment, Wintrow said.

“The employees are very likely to find other opportunities in military installations down there,” Wintrow said. “Or they might take jobs in private industry, as San Antonio is a city of over a million people and growing. Some are close to retirement and may choose to retire early.”

However, some military personnel will not have a choice and some civilians will lose their jobs if they don’t move, Crockett said.

“This is a sensitive situation,” Wintrow said. “We are trying to get people to leave San Antonio as they are losing their jobs. There are family considerations of all kinds. The sense was that we were there to provide information.”

The two villagers were told by the director of the transition at Brooks that this is the first time that any base has been approached in this manner, Crockett said.

They fielded such detailed questions as Yellow Springs fire and ambulance services, the student–teacher ratio at public schools, the status of Antioch College, and the progress of the Center for Business and Education, he said. People also wanted to know about the greenbelt, bike riding, the parks and the bike paths.

“Some knew of Yellow Springs from TDY assignments at Wright-Patt and word of mouth,” Crockett said. “Yellow Springs seems to be a very popular place. Some who had lived in the area said they would like to live in Yellow Springs, but felt that homes were too expensive.”

She also heard from a lot of people who are very interested, Wintrow said.

“Military people and civilian employees tend to stay in the same circles,” she said. “They tend to be more transient and are used to moving. To them it’s an adventure.”

Some had been stationed at Wright-Patt before and are looking forward to coming back, Wintrow said.

“Some are just tired of 114 degree temperatures. In some cases the work they are doing is so specialized that only one person knows how to do the job,” she said.

Wintrow was struck by the diversity of the group.

“Since after World War II, the military has probably been our most diverse organization,” she said. “Historically, a diverse group of scientists and engineers from the base has found Yellow Springs to be one of the few places they felt comfortable living, and provided the village with its diversity. Mark Crockett’s father was one of them.”

According to Wintrow, there was an added benefit to the joint effort brought about by the DDC.

“It was a social networking environment with surrounding communities,” she said. “The whole region, considered together, made a compelling story. We put a good face on the bad news they had been hearing about Ohio. This turned out to be a great model for future regional cooperation in all kinds of areas.”

There will be opportunities for those who are interested in following up. Wintrow and Crockett left brochures, phone numbers and e-mails. In addition, the transition people at Brooks are putting together a base data bank, Crockett said.

“Some said they will come just to check us out,” he said. “Others will be at Wright-Patt on TDY assignments.”

“Even if they do not move directly to Yellow Springs, but to another community, they are still aware that we are here as an attraction,” Wintrow said. “The bottom line is that people who may not have considered the move at all, may consider it now.”