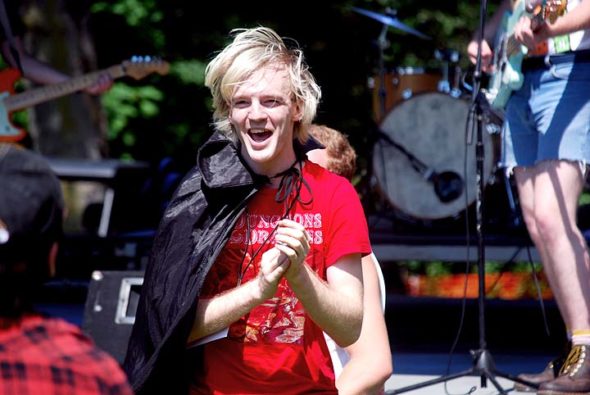 A beaming Jordin Goff, drummer for the Yugos, from Cincinnati, engaged with the crowd at Springsfest 2017. (Photo by Aaron Zaremsky)

Springsfest, a celebration of music and community, returned to Yellow Springs for its second summer last Saturday. Seven hundred people set up blankets and hammocks or just milled and mingled on the grounds of John Bryan Community Center, an increase of about 200 from last year, according to organizer Conor Stratton of Great Guys Entertainment. Attendees came from as far away as New York City, Chicago and Detroit. Nine musical acts performed, and local beer flowed freely, with sales doubling this year, according to Yellow Springs Brewery co-owner Lisa Wolters. Festival sponsors included the Brewery, YS Chamber, Dunphy Real Estate, Toxic Beauty, Dayton.com, WYSO and Antioch College. A third festival is planned for next summer.