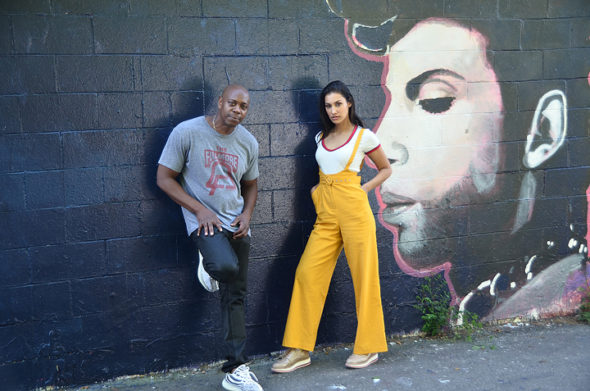 Before the screening of her new feature film “Blindspotting," at the Little Art Theatre, July 19, Actor Janina Gavankar and friend Dave Chappelle hung out in front of a mural of the musician Prince in Kieth’s alley by local artist Sarah Dickens. (Photo by Robert Hasek)

Actor Janina Gavankar visited Yellow Springs last Thursday, July 19, for a special preview screening of her new feature film “Blindspotting.” Local resident Dave Chappelle hosted the sold-out event at the Little Art Theatre, where villagers and guests stayed late into the night and partook of an informal question and answer session after the movie.

Before the screening, Gavankar and Chappelle hung out in front of a mural of the musician Prince in Kieth’s alley by local artist Sarah Dickens. In a follow-up email interview with the News, Gavankar, an Illinois native, wrote, “I had one of the best days of my 2018 in Yellow Springs … It was a combination of being back in the Midwest, the openness of the community, and the spring water!”

She added that the film, which deals with race, class and gentrification, addresses issues in Yellow Springs. “They’re dealing with some of their [own] questions about policing and it was a very quiet, very intrsopective conversation that a community clearly needed to be having with itself,” Gavankar later told the Hollywood Reporter about the Q&A session.

The local screening was followed by a limited release in New York and Los Angeles the following day. “Blindspotting” is being released nationally in select theaters on Friday, July 27.