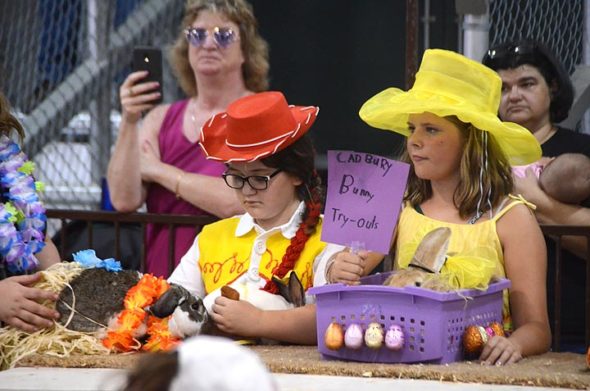 A few of the contestants in the rabbit costume contest at this year's Greene County Fair. (Photo by Lauren "Chuck" Shows)

Last Wednesday during the Greene County Fair was the 4-H-sponsored rabbit costume contest — in which youngsters and their pet rabbits dress in tandem, themed costumes.

This year’s first place winners were dressed as a Cadbury Bunny hopeful and her Easter-hat-wearing human; the second place bunny was dressed as E.T. from the film of the same name, bundled in a blanket in the bike basket of her human partner, who was dressed in the iconic red hoodie of E.T.’s human pal, Elliott.

Last week the 180th Greene County Fair was in full swing, as young folks from around the county bustled through the hay-filled stalls and arenas, preparing for the competitions they’d undertake throughout the week. The fair boasts tens of thousands of attendees every year — last year’s attendance was over 50,000 — with many showing up to sample the popular food, games and rides on offer. Often less well-known are the various 4-H and FFA-sponsored events and competitions, such as egg tosses, fashion shows and harness races.

Read the August 7 issue of the News for a full story on the fair.