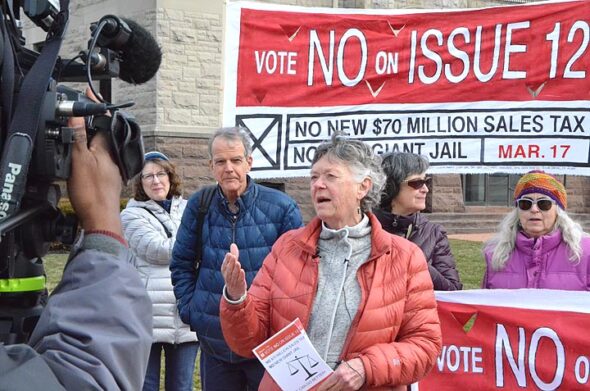 On Thursday, March 5, members of Greene County Citizens Against the Giant Jail Tax held a press conference in front of the county courthouse in Xenia. Local media covered statements from the group, which consisted largely of Yellow Springers.

Here, Pat DeWees spoke against the ballot measure, Issue 12, which would raise $70 million for a 500-bed jail, saying county leaders chose the “largest jail and the most costly jail.” DeWees highlighted efforts to eliminate cash jail bond. “Why would we want to go against that trend and increase the number of beds?” she said.

Bomani Moyenda, the group’s convener, said the proposal, which increases beds by 30%, was “astronomical” and “unnecessary” and “ignores more reasonable options.” Jim Leonard said the proposal is outdated. “We call on the commissioners to come up with a better sized jail along with funds for treatment,” he said. “We can do better.”

The primary election is Tuesday, March 17.