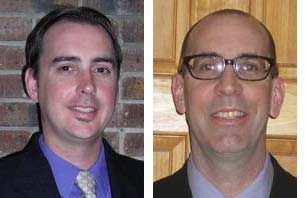 Matthew Housh, left, has been recommended to lead Mills Lawn, and Columbus resident Tim Krier will be recommended as principal of YSHS/McKinney Middle School.

One is a 38-year-old musician and former skateboarder who lives in Yellow Springs, the other, a 43-year-old doctoral student who wouldn’t have considered any other district. Both will be considered by the Yellow Springs school board for the positions of principal at the board’s meeting on Thursday, April 8, at 6 p.m. at Mills Lawn.

“I’m very excited about the people we’re recommending,” Interim Superintendent Tony Armocida said on Monday. He led a team of about 50 community members and school staff who were especially focused on finding candidates with administrative experience and knowledge of a broad curriculum, and people who would be “a good fit for Yellow Springs,” meaning “engaging, articulate and enthusiastic.”

“Both of these guys have those qualities,” Armocida said. “At the end of the search process we had two people who really stood out, and it bodes well for the district to have such high-quality people who are interested in working here.”

Housh, 38, is currently the principal of Valley Forge Elementary, a school with 500 students which is part of the Huber Heights City School District. He would replace Mills Lawn Interim Principal Ray Combs, who stepped in last August when former Principal Christine Hatton resigned after 11 years at the school.

A Dayton native, Housh began his career as a special education teacher and left Ohio to experience teaching in schools in New Orleans, Chicago, Denver and Bangkok, Thailand. He returned to Ohio in 2004 with his wife, Deb, and son, Tyson, and served as an administrator at a charter school in Cincinnati before joining the Huber Heights district. He and his family came to Yellow Springs to live in a small, safe college town that values education and the arts, he said this week.

Tim Krier has worked for the Ohio Department of Education in the offices of literacy and of safety, health and nutrition. He would replace current Principal John Gudgel, who is retiring after 30 years with the district.

Krier began as an English and science teacher and in 2000 became assistant principal and then principal of the York River Academy, a 7–12 school in Virginia, where he focused on using tools like pocket PCs and digital portfolios to help students be creative with experimental programs and found success by standard testing measures, he said this week. In 2004 Old Dominion University selected him as the state’s technology administrator of the year, the judges stating that, “Tim has many of the characteristics that one would expect of an exceptional leader: infectious enthusiasm, stamina, persistence, a deep concern for student learning…”

When his family moved back to Ohio to be closer to extended family, he joined the ODE and began a doctoral program in educational policy and leadership at Ohio State University. His course work will be done soon, and he plans to complete his dissertation this next year, while on his “listening world tour” to get to know the village and the schools, he said.

Krier and his wife, Kim, and their two young children were drawn to Yellow Springs because of its creative arts community, and Krier was excited by the schools’ demonstrated experience with creating new curricula and the intent to “mature from a national school of excellence to an exemplary 21st century school system,” as the school’s Web site states.

“When I saw that I said to myself, ‘Yahtzee!’” Krier said. They are looking for a house in the village and plan to move before the fall.

The search process for the two principals began last November and was led by three committees: an administrative group, a Mills Lawn group, and a high school group, all made up of board members, administrators, teachers, parents and community members, Armocida said. The groups reviewed 40 applicants for the Mills Lawn position and 43 applicants for the high school position, and then chose six candidates for each position to interview.

“We really shook the bushes” to get applicants from all over Ohio, Armocida said, out of which emerged a clear and unanimous favorite in Housh for Mills Lawn, and a pool of three finalists for the high school. Those finalists were reference checked and interviewed again by staff and students, said Armocida, who was grateful to all the hours staff and volunteers put into a process the candidates themselves called “rigorous but fair,” he said.

The principal search process was similar in its inclusiveness to the district’s superintendent search process, which is also scheduled to be completed in the next few weeks. Armocida, who came back to the village after his retirement as superintendent to fill the gap that Norm Glismann left in 2009, will retire again once that position is filled.

“We want to get the right person who enjoys being here because I don’t want to retire a third time,” he said.