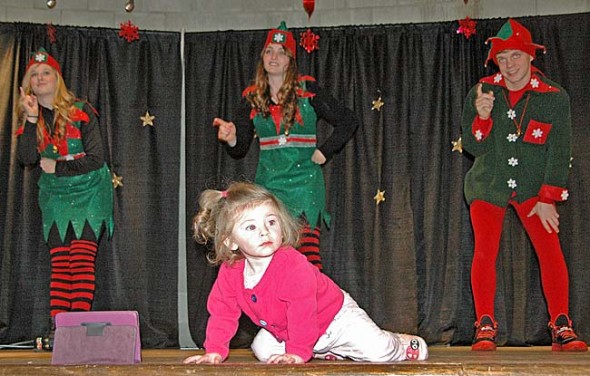 Audrey Creighton became the self-appointed star of the Holiday Fest in the Springs show on Saturday when she climbed up on stage as the elves gave their seasonal admonition about pouting and crying. The afternoon’s performance at the Vernet Ecological Center featured a chorus of the Mills Lawn fifth and sixth graders and dance and vocal concerts by each of YS Kids Playhouse classes in hip-hop, ballet and singing. (Photos by Lauren Heaton)

Saturday afternoon’s holiday fest at the Glen’s Vernet Ecological Center included a stage full of hip-hop dancers, above. While the performances continued, children and parents lined up for a chance to visit with Santa, right (who some say looks remarkably like Steve Haws, marking his 46th year as the bearded man), including local resident Elijah Moon. After their urban mix, the students gathered on stage to introduce themselves and explain what they liked about hip-hop. Below, from left, Loren George,

Kenji Housh, Eleanor Claggett and Claire Barlaje, all gave an air of confidence and competence at the mic. At bottom, Claire Lewis and Loren George perform one last dance before joining the dozens of other children for arts and crafts.