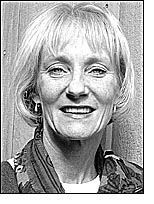 Sarah Wildman likes small towns. She grew up in one in Illinois, and she left big city life to spend the past 20 years raising a family in another one just north of Yellow Springs. So as the Village’s first economic sustainability coordinator, when she tells prospective residents and businesses that Yellow Springs is a great place to live, work, and do business, she is speaking from both knowledge and experience.

Wildman was hired by the Village in December as a part-time employee. Using her time most effectively, she wants to find the right people and businesses to tell about Yellow Springs — those she knows would like it here and would also be welcomed by the community. The job is a lot like a matchmaker’s.

“Part of my job is to identify what our assets are, and then figure out what are people looking for?” Wildman said in an interview last month. “It’s all about that right fit.”

The economic sustainability coordinator is a newly created position that hasn’t yet been completely defined. For the past six months Wildman has focused on inventorying the village’s assets in terms of its services, amenities, transportation options and facilities and trying to promote them in the region and on the Village Web site. She wants to let as many people as possible know that the village is a good place to locate a business because it has an educated, skilled work force, an “incredible brain trust,” and people who truly enjoy living here.

Having served over 17 years as the village manager of South Charleston, Wildman knows that small towns need an extra boost to maintain their vitality.

“I promoted economic development in South Charleston because I felt it was important,” she said. “Small towns have an enormous challenge, because while the quality of life you can have is high, you have to provide the minimum services that a local government needs to provide, and you don’t always have the population to spread the costs over…and when it comes to jobs, small towns have a challenge getting large employers to locate here.”

According to Village Manager Mark Cundiff, who directly oversees Wildman, the sustainability coordinator’s first job is to respond to businesses who are looking to expand or locate in Yellow Springs, by showing them available spaces and introducing them to both the practical and cultural assets the village has to offer. Though many who need access to rail and interstate frontage won’t even consider Yellow Springs, other small manufacturers or research-based businesses might like being in the village, Cundiff said.

But perhaps Wildman’s biggest goal will be to work with the economic sustainability commission, which Village Council has approved but not yet appointed, to craft a plan for the village. That plan would include retaining and expanding existing business, encouraging new start-up businesses (perhaps through an incubator at one of the local schools), and attracting new businesses from out of town, Cundiff said.

Attracting new businesses will be challenging in Yellow Springs for two reasons: steep competition from other areas and the fact that Yellow Springers can be picky about what types of businesses they want here. Green industries such as YSI are good, for example. But take a business that does medical research, which is good and likely non-polluting but is connected to the Air Force base, which some in the village are idealogically against, and it’s difficult to know whether it would be accepted here, Cundiff said.

Getting a sense of what is and isn’t acceptable here is necessary to avoid wasting time and money courting businesses that could then be turned away, Cundiff said. But it’s also risky because of the competition factor.

“If businesses don’t think they’re going to be wanted, they’re not going to come here,” Cundiff said, adding that there are plenty of other places near and far for them to locate instead.

Wildman, 57, grew up in a town of 400 in Illinois and was trained in museum studies before getting an MBA to market the arts in several cities around the country. After she married and moved to South Charleston, she worked as a marketer in an advertising firm outside of Yellow Springs and in 1992 became the village manager of South Charleston.

While Wildman was fired from her position in South Charleston because of what she called age and gender discrimination in a lawsuit she filed against the village in 2009, she worked with some success to retain the businesses that supported that community. South Charleston is a community of 1,600 with rail access for several large industrial employers, including Southwest Landmark, an agricultural supply company, and two Honda parts suppliers, one of which was Yamada North America. When in the early 2000s Honda was pressuring its two suppliers to relocate to Alabama, Wildman stepped up the pace on an enterprise zone she had initiated to allow the industries to be eligible for government tax abatements. The companies stayed in South Charleston.

Yellow Springs has businesses it needs to retain and others it could help to expand, and the village has also fielded inquiries from several outside businesses looking to locate here, both Wildman and Cundiff said. Most of the inquiries Wildman has responded to have come from small businesses in and outside of the village who are looking for a new space. Cundiff did respond to an inquiry from a wind turbine manufacturer, who needed direct interstate access.

“Could we host a wind turbine manufacturer in town? No. But how about one that manufactures one of the 70 million parts the turbines use? Yeah, we could do that,” Cundiff said.

Through the partnership between the coordinator and the commission, the Village should be better equipped to both promote the village and respond to inquiries in a timely manner. The process does involve some serendipity, Wildman said. But it also hinges on good planning and having the “table set” when the right businesses come along.

“This job is not just about economic sustainability, it’s also about community sustainability,” Wildman said. It’s about how “to maintain what villagers love about Yellow Springs — the economy, jobs, the schools, it all feeds on itself.”