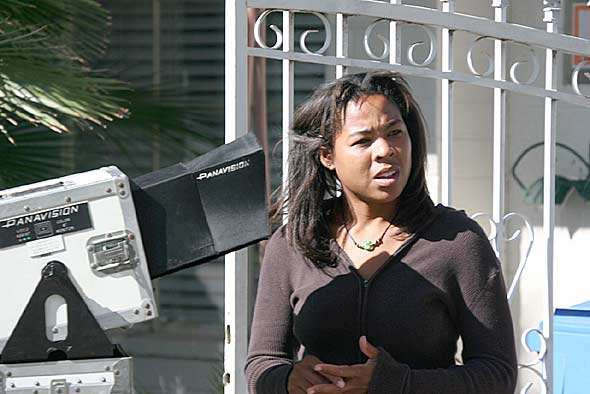 Jennifer Sharp, a 1992 graduate of Yellow Springs High School, returns home to show her most recent film, I’m Through With White Girls: The Inevitable Undoing of Jay Brooks at the FilmDayton Festival this weekend at the Neon Movies as well as at a public screening at the Little Art Theatre on Saturday, May 15, at 5 p.m. The festival takes place at various locations in Dayton and also features a short on the closure of Antioch College by YSHS graduate Joseph Lurie. Tickets are $5 for most shows. I’m Through With White Girls won twelve awards, including Best U.S. Feature at the American Black Film Festival, and was acquired for distribution by Image Entertainment. (submitted photo)

More than 20 years ago Jennifer Sharp worked as a janitor at the Little Art Theatre, cleaning the bathrooms and sweeping up popcorn. The 36-year-old is now back as a successful film director to show her first full-length feature.

Her film, I’m Through With White Girls, is one of dozens that will be shown as part of the three-day Dayton Film Festival, and is one of many that features the work of Yellow Springs natives and current residents.

Sponsored by FilmDayton, an organization promoting filmmaking in the region, the second annual festival will run Friday, May 14, through Sunday, May 16, in downtown Dayton and will include short and feature-length films by local filmmakers, area premieres of award-winning national and international films and workshops with film professionals.

Sharp’s film, a romantic comedy about a black man who dates only white women, shows at the Little Art Theatre at 5 p.m. on Saturday, May 15, and at the Neon at 8 p.m. on Sunday, May 16. “I’ve come full circle,” Sharp said on returning to screen her film in her hometown of Yellow Springs. “This will be meaningful to me.”

Raising the next generation of filmmakers is one goal of FilmDayton, which was spawned from a multi-day brainstorming event in 2008 on ways to support Dayton’s creative community, especially its youth.

“I knew we had very successful independent filmmakers here,” said Yellow Springs resident Debra Wilburn, who first conceived the idea at the brainstorming. “We have people who are interested in film — a film enthusiast community — and there are very rich stories to be told here,” she said.

One such story is the closing of Antioch College, as told by Yellow Springs native and Wright State University film student Joseph Lurie in his work-in-progress, “Be Ashamed to Die,” which will be shown at 1 p.m. on Sunday at Gilly’s as part of the festival.

Lurie’s film is one of many short student films at the festival. In addition, films from the  Yellow Springs-based Sundog Film Festival, a statewide short film competition for high school students, will be shown at 1 p.m. on Sunday at the Neon as part of the festival. They will also be shown in Yellow Springs at the Little Art Theatre on Saturday, May 15, at 2 p.m., where this year’s winners will be announced and prizes awarded.

“A film festival is like an adrenaline rush of cinema,” said FilmDayton board member and Yellow Springs filmmaker Steve Bognar, who helped select some of this year’s films.  In addition to films by up-and-coming filmmakers, audiences can see critically-acclaimed independent films from around the world before their release, such as the 2010 Sundance Grand Jury Prize Winner, Winter’s Bone.

The 2010 Academy Award-nominated The Last Truck: Closing of a GM Plant, by Bognar and Julia Reichert, will be screened on Saturday at 3 p.m. at Gilly’s, along with a new film he and Reichert worked on, Convention, a documentary on the 2008 Democratic National Convention in Denver, showing on Saturday at 10:30 a.m., also at Gilly’s.

Another organization promoting creative media in the Dayton area, Yellow Springs-based radio station WYSO, is participating in the festival. The station will run a screen-less screening featuring radio stories from independent producers around the country, presented in a dark movie theater, on Saturday at 3 p.m. at the Neon.

“There’s a tremendous crossover between radio and film,” said WYSO General Manager Neenah Ellis, who hopes to increase interest in audio as an art form so that more community stories can be aired on WYSO.

“Radio has the best pictures because it all happens in your mind,” she said.

To encourage the next generation of local filmmakers, FilmDayton is offering educational workshops at the upcoming festival on everything from cinematography to being a film extra.

Bognar and Reichert will run a workshop on filming under duress, which they experienced filming Convention, when they were assigned to follow a reporter’s every move for four straight days. Joining them will be Lise Lense-Møller, the director of a documentary on the 2007 Myanmar uprising, Burma VJ. She is traveling from Denmark to show her film at the festival.

Sharp will run a session on film directing, which she began focusing on while attending Tisch School of the Arts at New York University.

“She’s a rising talent,” Bognar said. “The story, the pacing, working with actors — she’s got what it takes to be a director.”

Though relatively new to the role, Sharp is quickly garnering the respect of critics and peers. After a successful 12-minute short film, “Boxed,” for which she raised nearly $5,000 from friends and family, including many from Yellow Springs, Sharp was asked to direct I’m Through With White Girls.

That film received 12 awards, including the Audience Award for Best U.S. Feature, at the 2007 American Black Film Festival, and was picked up by the cable TV-network Showtime.

“It was extremely successful,” Sharp said. “People were responding.”

Sharp attributes much of her success to growing up in Yellow Springs, where she started acting in school plays at a young age.

“Yellow Springs is  a free-spirited, liberal and artistic place,” Sharp said. “It nourished my creativity.”

In addition to the film festival, FilmDayton has supported the local filmmaking community by hosting monthly “Film Connections” meetings for veteran and aspiring filmmakers alike. Each month more than 50 local film directors, producers, composers, special effects experts, funders and other professionals meet to share their work.

FilmDayton also focuses on marketing Dayton as a location for film production, which could be a boon to the local economy.

“The Dayton region is full of great locations: the dirty bar, quaint diner, lonely country road, small town, city scene,” Bognar said. “We also have a local talent base and a work ethic,” he said.

Wilburn stressed another benefit of developing the local film industry. “It is a relatively green industry and it’s relatively non-polluting,” she said. “It could be transformative for the city.”

As an artistic medium, films can also be transformative for their audiences, according to Sharp.

“There’s a role for films where you can just forget about things and laugh, but that’s not the kind of movie I want to make,” she said. “I want to put out movies that make people think and question their own lives.”