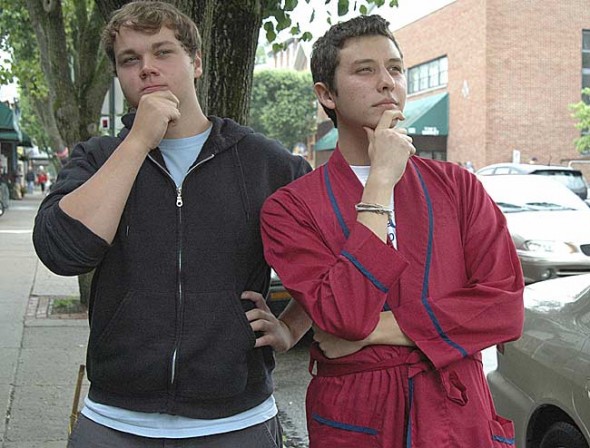 Friends and classmates since they were in elementary school at Mills Lawn, the Yellow Springs High School class of 2010 valedictorian John Michael Malone and salutatorian Dylan Amlin have plans. But they’re not plans in the typical sense. In fact, beyond college, their plans hinge precisely on not having a defined path with goals that would lead them to a job, a house and “settling down.”

“I don’t want to work in the same place for long periods at a time — I don’t want to be stuck in one place,” Malone said. “I want to go do different stuff, like climb Mount Everest or get on a boat and sail around.”

Amlin agreed that one of his chief aims in life is not only to tread a path less traveled but to share and connect with others who are also seeking a life outside of the existing circles of power, he said earlier this week sitting at Dino’s in a maroon bathrobe.

Malone, who will attend Florida Institute of Technology in the fall, comes from a math and science background. Amlin prefers philosophy and the humanities, which fits with his decision to attend New College, a liberal arts honors college also in Florida. But both laughed enthusiastically when Amlin described his approach to life after 12 years of a relatively sheltered education in Yellow Springs.

“[…]uck the Man,” he said, referring to an object defined by urbandictionary.com as “the Patriarchy and hegemonic systems of power,” or the oppressor. His aim to overthrow the systems of oppression is perhaps rooted in Yellow Springs and Antioch College history, but both Malone and Amlin say they feel disillusioned by recent issues, both local and beyond, that sink energy into projects that only serve to mask the real threat of complacency of the masses. One example for Amlin is local residents’ recent fixation on whether to fund a dog park, an issue he found to be unworthy of the time and energy it took to resolve. According to Malone, the same skewed set of principles are at work with Arizona’s multi-million dollar campaign to rebrand itself after years of being blamed for taking a hard line on immigration.

“I have trouble trusting big institutions — they make me nervous,” Malone said. “I’m very against the Man.” And countering the Man, according to Amlin, means organizing the public.
“Wandering around and starting a revolution is one of my plans,” Amlin said.

Wandering is also high on the list for Malone, whose inspiration is a guy who walked the globe for 20 years and ended up with the expertise to open a touring company. And both young adults plan to get some traveling under their belts, together for part of the time, before they start school in the fall. They plan to head west this summer with several other friends on their “cross country odysseys,” perhaps to Yellowstone National Park or maybe as far as Scotland. The extent of their Bohemian lifestyle depends on how much money they have saved by then and how far they can make it stretch, they said.

Malone has been saving from his job at Tom’s Market, where he has had plenty of time to work since he takes just two classes at the high school and two PSEO math and computer science courses at Wright State University. He would like to have been challenged more in the village school system, he said, instead of always bogged down by busy work. But he augmented his experience as a youth by leaving the state to kayak and rock climb, and he did find one person, his physics teacher Mr. Lemkau, who helped him to go beyond the surface and engage in independent learning.

“I could walk around his classroom, and he would just explain to me how everything works,” Malone said, almost surprised at the response of a teacher who was willing to help him to the next level.

The extra push helped him to decide that he wanted to stay in the sciences and study oceanographic engineering at Florida Tech.

Amlin also got to explore more this year by completing his credits early and using the extra time to travel abroad. He studied Spanish for a month in Cuernavaca, Mexico, and spent another month in Sri Lanka under the guidance of Bhante Seelagavesi, a Buddhist monk who has lived at the Yellow Springs Dharma Center. And he read outside of class, getting recommendations online through Amazon, on subjects from philosophy to psychology and social criticism.

Both Malone and Amlin found that exercising these outlets for independent learning were essential to maintain a pattern of growth while living in Yellow Springs. They will use those critical thinking skills to help them design their own unique plans of education through school and more likely outside of it. And at some point they do hope to figure out how to make money as a side benefit.