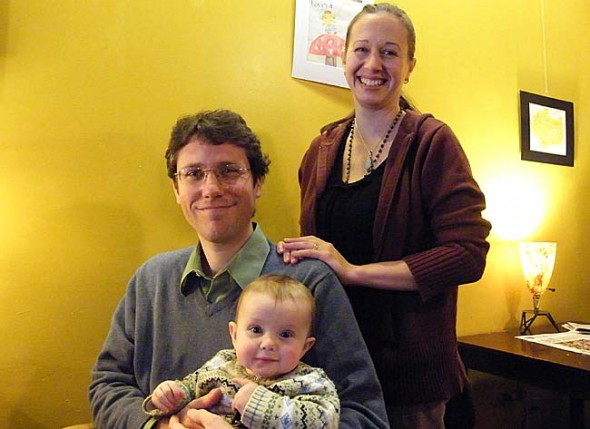 From Beirut to a bicycle village

The Iwens are used to feeling the air move against their faces, and to these new villagers, the air in Yellow Springs has seemed sweet since the first encounter.

Jovana Bouche Iwen came to know the wind while living in the Virgin Islands, learning to sail. Jayson Iwen, a writer and poet, was a runner. As a young married couple living in Beirut, Lebanon, they ran (like the wind, as much as is possible when watching for land mines) with the local Hash House Harriers chapter, an international group Bouche Iwen said describes itself as “an international drinking group with a running problem.”

Once, in 2006, they felt the air move in a whole different way when a major explosion rocked the city of Beirut, devastating a swath of downtown and shattering or warping windows with its sheer force miles out from the site.

But today, more familiar winds prevail. For Iwen, it’s the wind through the car windows as he drives the country roads to his job teaching English at Central State in Wilberforce. For Bouche Iwen, it’s the wind she and baby Marlow feel while tracking across town with the stroller no matter the season, or the breath and how

it moves when she is practicing yoga, or teaching at Yoga Springs.

Married in 2002, Iwen had a PhD in English with an emphasis in creative writing and Bouche Iwen had a bachelors in history, both from the University of Wisconsin Milwaukee. When Iwen was offered a position at American University Beirut, the couple moved to Lebanon for four years, which they described as a vibrant, friendly and diverse urban experience, even as political tensions increased and resulted in the occasional car bomb.

But Americans’ perspectives on foreign realities are sometimes skewed, and Bouche Iwen and Iwen both felt that car bombs were not cause to stay home. Rather, the bombs were carefully targeted assassinations planned against specific persons. For most people, daily life went on. Ardent walkers, they kept walking and enjoying the urban scene, as did others, locals and ex-pats alike.

“We reached a point where if we stayed any longer we might have stayed there forever,” Bouche Iwen said, noting that Iwen was coming up for promotion (sort of like tenure) at American University Beirut.

As interesting as Middle Eastern studies are, Iwen hesitated to advance in his then-current position because he would be expected to become an expert in that field. But his creative writing roots were calling him home. And as political tensions escalated in Lebanon, many ex-pats returned to the states just before a major military retaliation in 2006. The Iwens returned to Wisconsin — but this time they tried Madison.

“We wanted something a little new, but close enough to friends and family,” Iwen said.

Iwen intended to try on a line of work apart from academia, which he called “a long string of interesting jobs” that included selling insurance and technical writing for an innovative records management company. They bought a home in Madison, fully intending to ground themselves there. But the itch to teach came back.

“I started evaluating my goals in life, and I decided that I was probably a better teacher than I was a technical writer — and I was more happy as a teacher,” he said. “It was more rewarding.”

After taking a sabbatical-replacement position at Beloit College in 2008 that required a 50-minute commute from their home, the economy crashed and Beloit “shed” all non-tenure-track jobs, Iwen said. As a visiting professor, this meant he was looking for work again, though he had a generous amount of time to plan.

“I hit the job market full stride,” he said. “I applied for over 60 jobs, but about half of them were canceled due to budgetary concerns.”

The job he landed at Central State was originally a tenure-track position, but, because of budgetary uncertainties, was changed into a term position. Because he loves his job and enjoys his colleagues, he hopes that the position regains its tenure-track status because the Iwens intend full well to stay in Yellow Springs.

When the Iwens, with baby Marlow, got the Central State offer, they came to the greater Dayton area to scout for a home. The family’s requirements were that they could survive with one car in a place that was pedestrian friendly and had cafés and grocery stores within walking distance.

After checking out Dayton’s east side, Kettering and Beavercreek, the family wasn’t sure how it was all going to come together until Johara Giddings, a new colleague of Iwen’s who was a villager and an Antioch College faculty member before moving to Central State, suggested they check out Yellow Springs.

“We decided to come for dinner, to check out the town,” Bouche Iwen said, “and instantly, as soon as we drove in, we fell in love.”

Almost immediately, they found a copy of the Yellow Springs News and, from the car, arranged three or four viewings of rental properties for the next day. They never made it to a restaurant. The next day, they were back in Yellow Springs looking at homes, and “that was that,” they said in unison.

For Bouche Iwen, living in Yellow Springs is the most similar experience to living in the islands that she has yet to experience in the continental United States.

While traversing streets that lack sidewalks with a stroller in sometimes severe weather conditions is less than ideal at times, living in town with one car is very doable, Bouche Iwen said. With everything within a mile of everything, it is easier to get around with a young child than living in a city would be.

Bouche Iwen, who is trained in both the Shivananda yogic tradition and in Yin yoga, which focuses on gently lengthening connective tissue, teaches classes at Yoga Springs Studio.

Currently, she offers a Yin class on Monday nights, and a slightly more active Yin-Yang class on Wednesday mornings. This season, she will teach a family yoga class on Thursday mornings for a parent and child between the ages of 3 and 6, as well as a yoga class for runners on June 19.

A major source of community support is found in the Wednesday morning playgroup at the Bryan Center, Bouche Iwen said, and the parent-to-parent support network she relies on has grown somewhat organically from the playgroup.

In addition to his teaching position, Iwen maintains a writing practice, and he has been published twice as a result of winning the first place prize of two separate writing competitions. His first published book of poetry, Six Trips in Two Directions, was published in 2006. His experimental novella, A Momentary Jokebook, hit the press in 2008, and has received reviews that liken his work to that of “Milan Kundera combined with South Park,” or “in the tradition of Vladimir Nabokov.”

Iwen enjoys his colleagues at Central State and would be happy to stay right where he is, but he seeks the security of the tenure track position — not only for economic reasons, but because academics are often forced to follow jobs to wherever they lead, and they would rather stay. In the meantime, he tries to maintain a writing practice (especially in the summer), and the Iwens will soon seek out the Dayton Hash House Harriers, as it is rumored that there is a local chapter.

But in the meantime, Iwen said, they are happy to wander about the various events that are always going on around town, which they said is a surprising amount of activities for a village this size.

“I get the sense that this community is so great because people have made it that way,” Bouche Iwen said. “It’s not a passive community.”