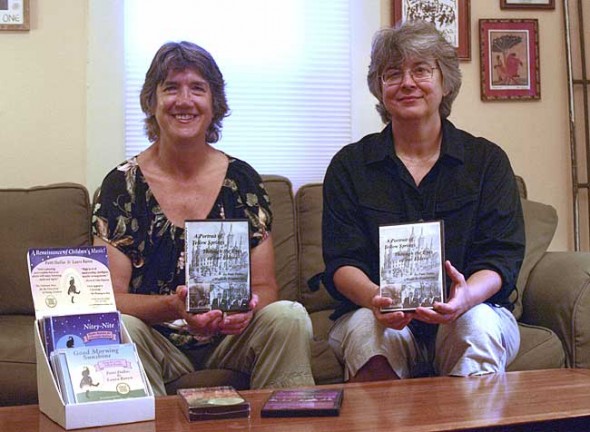 Local videographer Patti Dallas and Jeri Lyn Studebaker are working to complete a new series of interviews with local elders. The first segment will screen at the Little Art Theatre on Saturday, July 24, 4 p.m.

Looking at Yellow Springs through our elders’ eyes

In 1999 local filmmaker Patti Dallas produced “A Portrait of Yellow Springs Through the Eyes of Our Elders,” a documentary for which she interviewed 17 individuals aged 75 and older. The elders spoke to themes such as the village’s early history, local resources such as Glen Helen and Antioch College, and the landmarks of Yellow Springs. Now Dallas, whose own parents moved to Yellow Springs in 1944, is working on a new edition of her film.

“I think about every 10 years is a good amount of time to collect people’s thoughts about the village,” said Dallas in a recent interview. By recording the voices of a “new crop of elders,” she hopes to get a “new take on the village and get a new take on the community.” Dallas and Jeri Lyn Studebaker, the project manager for the video, aim to begin production soon and to have the new film ready for viewing in three to six months.

For those interested in seeing the first “Portrait,” the Little Art Theatre will host a screening on July 24 at 4 p.m. as part of a fundraising event. Dallas’ work is also for sale at Town Drug, Eco-Mental and the Emporium.

Dallas plans to structure the new “Portrait” similarly to the original video, which runs about two hours, is centered around clips from interviews with village elders (for her project, Dallas has defined “elder” as a person 75 and older) and is divided into “chapters” according to the themes that arose as the footage was edited. As in the previous video, Dallas wants to give her subjects enough time to develop their points and ideas fully.

“One issue I’ve run into is these days people are just so used to sound bites…[but] people don’t talk in sound bites,” said Dallas. She said she will aim to strike a balance between “letting people say what they want to say and taking the needs of viewers into account.”

The first portrait also featured “around 300” archival images gathered from Antiochiana, and Dallas again plans to intercut the interviews with images of historical photos and documents. Music from the local group Heartstrings provided background and transitions in the original “Portrait” and Dallas thinks it likely she’ll use their newest recording in this one.

She is excited to try a more supportive approach to production this time around.

“The last one, I didn’t have enough collaboration and as a result it just took much too long,” she said. Dallas and Studebaker plan to assemble an advisory panel to meet once or twice and suggest question ideas for the video.

Some of the questions may be similar to the ones she asked the previous interviewees, providing an opportunity to hear different perspectives. She will ask them about “the historical forces that have made Yellow Springs what it is,” which villagers have been “influential” and the impact of Antioch College and the college’s closing in 2008. Participants might address both the triumphs of the village and difficult issues such as a decline in the population’s diversity.

If some current trends present Yellow Springs with serious challenges, Dallas’ 1999 documentary offers evidence that villagers have successfully addressed major problems — even similar ones — in the past. In the chapter “Mr. Morgan Comes to Town,” Arthur Morgan’s son Ernest says that when the family first moved to town they found it “friendly” but “struggling.” Antioch was on the brink of financial collapse, he said, and young people left town as soon as they could. According to Dallas, Arthur Morgan eventually played perhaps the pivotal role in transforming Yellow Springs into a “vibrant” community, but he started more or less from scratch.

“I’ll always remember that quote that Ernest told me [from Arthur Morgan to his wife when they first visited Antioch]: ‘I think this place is dead enough we can do what we want here,’” she said.

For Dallas, producing the new film is partially a question of “thinking about what the past has been when you’re planning for the future,” as in the current Visioning project. She also wants villagers to be able “to have a sense of our wholeness as a community….we come from where we’ve been….In a time when we’re so driven by the newness,” she said, it’s important “that we have a sense of our roots.”

“I think it’s also a way of honoring the people who have helped put us where we are,” she said.

Currently she is gathering her pool of interviewees; she has asked a handful of people to participate and hopes to have a total group of around 20. She and Studebaker also want to raise $15,000–$20,000 to help pay for costs by appealing for private donations and are applying for grants from organizations such as the Yellow Springs Community Fund and the Ohio Humanities Council.

Part of Dallas and Studebaker’s work is spreading the word about the new “Portrait.” They don’t have a specific target audience in mind, Dallas said, but hope that many different groups might have a chance to watch the film.

“I would love to have it shown in schools in some capacity,” said Dallas. “I enjoy giving the [1999] video to people who have come to town, like the new Village manager, the new president of Antioch.”

“We’re hoping to put a lot of energy into promoting it, even outside Greene County,” said Studebaker, who thinks the video could play an instructive role. “There’s this idea that since Yellow Springs has been such a successful community, we think other communities will be interested in knowing how that came about and getting ideas to improve their own communities.”

Elders who might like to be interviewed for the new film can contact Dallas at 767-7884, and donations to the project can be made through Friends Care Community.