“Professor Ellis Fowler, a gentle, bookish guide to the young, who is about to discover that life still has certain surprises, and that the campus of the Rock Springs School for Boys lies on a direct path to another institution, commonly referred to as the Twilight Zone.” 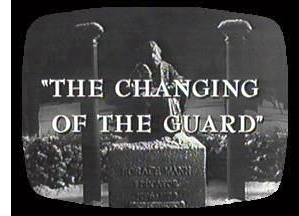 Thus begins “The Twilight Zone” episode “The Changing Of The Guard”. Fowler has been teaching for 51 years and is being forced to retire. Pondering his fate and his past, he comes to the conclusion that his whole career has been in vain because he hasn’t made a lick of difference to or an impression on any of his students.

Depressed, he decides to commit suicide. Handgun in hand, he returns to his school, to a statue of none other than Horace Mann, adorned with his famous Antiochian “Be ashamed to die until you have won some victory for humanity” quote. Fowler tells Horace that he is ashamed to die, but alas, there is nothing more to be done. Just as he is about to pull the trigger… (dramatic pause…) he is whisked away into the Twilight Zone! Ghosts of his former students appear to him, saying that he has, in fact, made a difference to them, in such personal ways he could never know them all. Fowler returns home, alive and happy, gracefully accepting his retirement. (You can watch the whole episode here.)

As you probably know, if you are reading this, if you have any connection to Yellow Springs, Rod Serling got his Bachelor’s degree at Antioch College. In much of his work, the Antiochian influence is clear, but never quite so directly as in this episode of the TV show he created, produced, hosted, and wrote most of the scripts for. 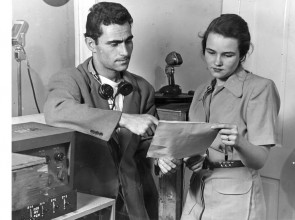 From the Cleveland Plain Dealer, 5/23/1949: ANTIOCH WINNER. Rod Serling, student at Antioch College, at Yellow Springs, O., who just won a nation-wide radio script contest, writes an original radio play every week on the kitchen table of a campus trailer, while his wife and fellow student, Carol, hits the textbooks or keeps the household running. Each week, too, he casts his play, directs it, plans music and sound effects for it and produces it over a Springfield radio station. In between times he studies, too. His wife looks over his script. (photo by John Hoke; courtesy of Antiochiana)

Rod Serling was born on Christmas Day, 1924 and raised in upstate New York. After graduating from high school, he joined the Army; he served as a paratrooper in New Guinea and the Philippines from 1944 until 1946. He’d been accepted to Antioch College during high school; he applied because his brother had gone there. “I just wanted a good school to get practical experience. I didn’t know what the hell I wanted to do,” he said. He entered in the fall of 1946.

He’d written a bit before, but had no thoughts of doing it for a living. Instead, he started out as a physical education major, because he liked working with kids. “But as is so often the case, I found that little hole, that little sense of hunger, that all is not right, something is left out. And then came writing…” [6].

He got interested in creative writing and radio, eventually changing his major to Literature. He was manager of the Antioch Broadcasting System’s radio workshop, and wrote, directed, produced, and scored weekly shows for a Springfield station. He won a prize for a regional original radio script contest and then won second prize (and $500) in a national radio contest. He sold several radio scripts and one for television before graduating.

Serling in the “real”, non-Antioch world…

After graduating in 1950, Serling and his wife (Carol, a fellow Antiochian) moved to Cincinnati, where he worked for a radio station and wrote freelance. This proved too taxing, so he decided to “drop my regular job for 12 months. Then if I couldn’t make enough to exist, I’d give up [writing]” [4]. Well make it he did. Serling made a living writing scripts for television, mostly dramas for live anthology shows.

Throughout his life-long career as a writer and then producer, Serling’s Antiochian ideals were unwavering and unabashed. He felt strongly that writers should “menace the public conscience” and that radio, television, and film ought to be “vehicles of social criticism” [7]. He said, “The singular evil of our time is prejudice,” and that he tried to address this in all of his work [2].

Politically conscious as he was, his scripts dealt frankly with social issues and were often censored by corporate sponsors, who didn’t want to be associated with anything that might be offensive—watering down plots, even changing a character’s race or religion. Corporate sponsorship and censorship became a thorn in Serling’s side. “I think it is criminal that we are not permitted to make dramatic note of social evils that exist, of controversial themes as they are inherent in our society” [7,2].

Like any good critical thinking Antiochian, though, he found a creative way around the problem. He found that in writing science fiction and fantasy, he could be more parabolic, more metaphoric, and that his scripts were approved more readily. In the words of his wife, “sponsors basically just didn’t understand what he was doing” [2].

And so, in 1959, “The Twilight Zone” was born. This show was a half-hour anthology drama taking place in various supernatural, futuristic, or dystopian worlds. It allowed Serling and other writers to tackle social issues in well-concealed but nonetheless effective parable form. It was a massive, seminal success.

Despite this victory-of-sorts, after a few years Serling needed a break from show business. He was over-worked, disillusioned, and weary from working within the system he found so flawed. “I’m no longer an angry man. Now I’m only a petulant aging man. I’m not exactly a meek conformist. I’m just a tired non-conformist” [5].

So where’s a “petulant aging man” to go to recharge? Why, back to Antioch, of course! His decision to return was fueled by his “tremendous feeling for Antioch and for what it does and I’ve always wanted to be more a part of it” [3]. 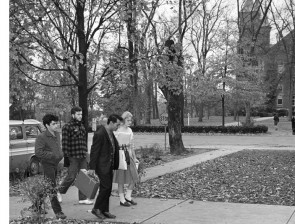 Rod Serling on Antioch College campus during his stint as professor, 1962–63 (photo by Axel Bahnsen; courtesy of Antiochiana)

Serling accepted a position as writer-in-residence and part-time teacher at Antioch College. He lived, taught, wrote, and hung out with his family here in town for five months in 1962–63. “It will be a respite, but that’s not to say it’ll be sack-time. I’ve been here before, remember, and I know there’s not much sack-time around Antioch” [3].

He taught classes in writing and drama, and an adult class on the “social and historical implications of the media.” You can read the typewritten notes of one of the students of the latter class here.

He enjoyed his time here, though was not without the challenges of the current generation of Antioch students. “They want to prove to me that they’re something less than impressed by my so-called status. I show them a film and then say, beaming with pride, ‘What d’you think of that?’ and they look at me and rip it apart” [1]. 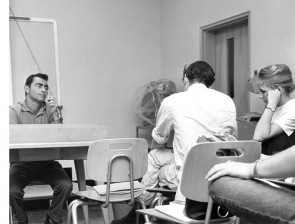 Rod Serling teaching at Antioch College during his stint as professor, 1962–63 (photo by Axel Bahnsen; courtesy of Antiochiana)

Toward the end, he was reflective: “I’m often asked, has this rather brief, transitory sojourn back at your old alma mater been of help to you? And I must answer to that very much in the affirmative. The questions thrown at me have made me restate my own position, have made me reevaluate what I believe to be right or true or just, have made me think again about those standards of judgment that I apply to my own work” [6].

…and all the rest

Serling returned to LA, where “The Twilight Zone” ran for another two seasons, until 1964. He went on to write more film scripts, including co-writing, with Michael Wilson, the adaptation of Planet Of The Apes (1968). He also returned to teaching, this time at Ithaca College, from 1970 until his death in 1975.

Toward the end of his term teaching at Antioch, he did an interview on WYSO during which he spoke at length on his love for Antioch and its influence on him: 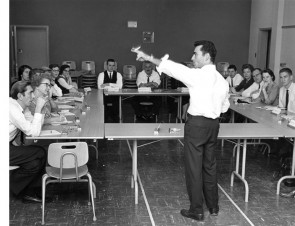 Rod Serling teaching at Antioch College during his stint as professor, 1962–63 (photo by Axel Bahnsen; courtesy of Antiochiana)

“[A]ntioch is somewhat looked askance at because of the volubility and dissent that comes from this campus. It has always been a place of dissent, but I think of wholesome dissent…. [T]his is what I learned at Antioch, that when something was wrong and I could reason it out and be secure in my own mind that it was wrong, that I could get up on my own two feet and make comment on it. And I guess if anything, that’s something that has carried with me over the years and has been, I think, fairly evident in my writing…. This I think is traditional at Antioch. The same freedom to speak, the same freedom to reason, and above all, the right to question. I think the idea of questioning is not only a right, it is a responsibility. We have to question, because from questioning we get betterment.”

“An exciting 4 or 5 years at Antioch is not the traditional college education. It is something very special, very different.”

There are many Antiochians that are Antiochians through and through, that experience Antioch not just as a place to get an education and a degree but as a pivotal point in their lives. A point in which arguably their very nature—often previously hidden and at odds with much of the rest of our societal system—is allowed to shine and develop. After Antioch, these folks can then go on to nurture their nature, strengthen their ideals, allow for and participate in constant questioning and change, and live in an uncompromising harmony with their world in a way they wouldn’t have been able to without Antioch. People like this simply could not have gone to any other college, no matter how “liberal” or seemingly progressive. Antioch is one of a kind, for one-of-a-kind people.

Rod Serling was clearly one of these people. So am I. So are most of the Antiochians I have ever known.

And without a new Antioch that is just as boldly and unapologetically progressive, voluble, critical, intense, “wholesome[ly] dissent[ing]”, “not anchored to any traditions of the past”, as it has been, historically—as Rod Serling was, as I strive to be—what will all the misfits do?

A very special thanks to Scott Sanders of Antiochiana. Muggins!