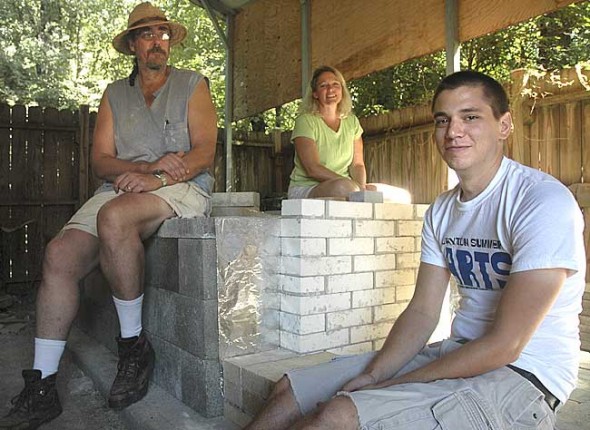 For more than 40 years, John Bryan Community Pottery has been an educational resource and incubator space for developing potters. Now, the local artists’ cooperative is expanding its well-equipped studio by adding a wood-fired kiln, one of a handful of such kilns in the region.

The new kiln, to be completed and fired in November, will supplement the studio’s electric and gas ovens, offering the potters and community members another aesthetic option for their pottery.

“One major benefit of wood is that the aesthetic is unique when you don’t have to glaze and the wood ash flies up,” said studio tech Geno Luketic. “We really want to make it that kind of thing where potters can experiment with firing.”

The kiln, which will be fired every few months, is modeled on an ancient Japanese, whale-shaped kiln designed to reach temperatures of 2,400 degrees Fahrenheit and requiring a continuous supply of wood throughout its 18-hour firing.

The 40-cubic-foot kiln being built by studio members is called a manabigama, which literally translates to “beautiful learning kiln.” It provides yet another educational opportunity for professional and aspiring potters alike.

“The wood kiln is not only another way to generate income, it’s community education,” said Frank Doden, who joined the cooperative two years ago. Members such as Doden have 24-hour access to the studio, receive discounts on clay and firing and can store their work on-site.

“[The studio] is for people like me who are interested in more than just occasional pottery,” Doden said. “There are always people around to ask questions — we learn from one another.”

The studio, located behind the John Bryan Community Center its entire history, has provided potters such as Doden the space and materials required to hone their craft.

“This is the transition place between taking classes and becoming a full production potter,” Luketic said. “It’s unique to have a transition from being a hobby potter to having your own studio.”

Once a member becomes a production potter, making their living by selling pottery, they must move on from the studio. A recent graduate is Naysan McIlhargey, who went on to found Miami Valley Pottery and build his own private wood-fired kiln on Hyde Road.

“In some way or another, most potters in town got started here, or used it as a resource,” said studio manager Lisa Wolters.

The unique studio, which will now have three kilns of different fuel types in addition to a dozen wheels, has attracted potters to the community for decades and provided a fun working atmosphere.

“It was the reason I came to Yellow Springs,” said Bill Mischler.

“I like the community aspect,” Susan Finster said. “I wouldn’t have as much fun doing this in my basement.”

“I was excited to move here because with so many potters, it’s created an appreciative ceramic audience,” Luketic said.

The self-sufficient studio generates enough income from its 16 members and from pottery sales at the annual Yellow Springs Street Fair and during the holidays to rent and maintain the space and to fund a part-time manager. Currently the studio is actively seeking a new part-time manager and is in the process of becoming a non-profit in order to apply for grants for its educational activities.

Fall ceramic classes begin this week, with opportunities for children and adults of all levels. Long-time potter Janet Murie will teach wheel throwing to adults in a six-week evening class that begins Sept. 20. Participants will learn the basics in creating a pot, with a focus on centering, throwing and creating basic forms on the wheel.

“Pottery is just ancient and has been in our lives forever. It’s not an obscure art craft — it’s everywhere,” said Murie, who herself learned pottery by attending classes at the studio in the late 1970s. She finds it common for those with some experience to return to the craft.

“There is something compelling to working with clay — it’s one of the things that brings people back,” said Murie.

Kids can get in on the act with afternoon classes starting this week. In this year’s classes, “Let’s Play Mystery Clay,” for grades K through 3, and “Anything Goes,” for grades 4 through 6, kids will use their imagination to come up with their own ideas for clay projects.

“The kids are always begging for it, to be able to do what they want,” Wolters said.

Classes still have openings. For more information or to register, contact Wolters at 767-9908 or jbcp.ys@gmail.com. Donations for the new kiln are being accepted. Send checks to John Bryan Community Pottery, 100 Dayton Street, Yellow Springs, OH 45387.