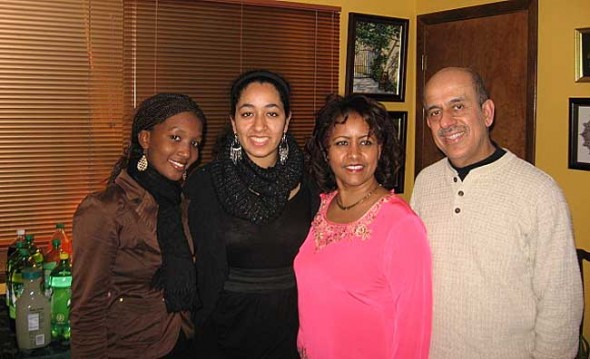 Espérance, left, a student from the Byimana School of Sciences in Rwanda, said goodbye to her host family, Savita, Saba and Vijay Bathija this week. Two students and a teacher spent three weeks in Yellow Springs, living with host families, attending school and trying activities such as skiing. They make the journey home today. (Submitted Photo)

Yellow Springs has been host to several Rwandan students and school officials over the past few weeks. These guests are from the Byimana School of Sciences in Rwanda. The two students, Serge Nshimyumukiza and Esperance Mutoni, have been attending classes at Yellow Springs High School while one of their teachers, Tharcisse Maniragaba, has been observing various math and sciences classes at the school. The visitors will not be here much longer, but in the short amount of time they have spent in Yellow Springs, they have made many memories.

Thanksgiving, snow, night sledding, and School Forest are only a few of Mutoni’s favorite memories. Mutoni, who aspires to be a medical doctor when she is finished with her education, pointed out all the differences between Yellow Springs and Rwanda. Decorating a house for Christmas aside from a tree, for example, was a brand new experience for her. Something as seemingly simple as free refills on drinks in restaurants was also new for Mutoni.

The differences between YSHS and the Byimana school were even greater. The class periods are longer, and there are eight periods instead of the seven at YSHS. There is no shifting of classes; instead, the teachers move. Students choose to focus their studies in either physics and math or chemistry and biology, and their rigorous schedules are set from there. Unlike American students, they do not have much freedom in choosing classes.

There are very few textbooks at the school as well, so students copy down notes from the board and then study from those as opposed to from a book. The Byimana School of Sciences is also a boarding school, so students live in dormitories for three-month terms, and then return home for a couple weeks before returning for the next term. When Mutoni returns home, she says she will miss the snow, Ha Ha’s Pizza, and her host family.

Al Schlueter, a retired Central State chemistry professor and Yellow Springs resident, is very involved with the Byimana school. After he retired from his position at Central State, Schlueter was put in contact with the school’s then headmaster, Brother Stratton. After several correspondences with Stratton, Schlueter traveled to Rwanda to teach at the school. This was not his first time teaching in Africa, though, as he taught in Ghana four times through Central State, as well as spending a year in Africa with his son. Schlueter stayed at the school and taught English and has since been back three times, teaching other courses.

Schlueter said he loves teaching in Africa because the students are all very dedicated and serious about their education. The Byimana school is home to the best students from all over Rwanda, and its students regularly score the highest on the national examination. Serge and Esperance were both chosen to travel to Yellow Springs by Brother Stratton for various reasons. They both have very good English skills and they also do very well academically. Esperance is very active in the school and Serge is the head boy, equivalent to a student body president. Schlueter took a group of five YSHS students with him to Rwanda a couple of years ago. He said the students had a life-changing experience that had a profound affect on them that he wishes every YSHS student could have.

“It would open their eyes to how many people in the world live and when they come home they would take advantage of all the opportunities they have and appreciate things more,” Schlueter said.

*Kelsey Cundiff is a senior at Yellow Srings High Schhool and News intern.