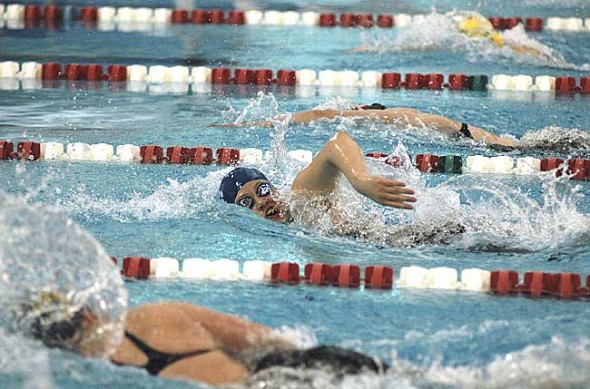 Yellow Springs High School junior Erika Chick blew past the competition in the 500-yard freestyle at last weekend’s district meet in Oxford, Ohio. She won by nearly seven seconds and qualified for the state finals with district titles in both the 200- and 500-yard freestyle. (Photo by Megan Bachman)

What the Yellow Springs swim team lacks in numbers, it makes up for in speed. In a season filled with winning swims, pool records and personal bests, last Saturday’s district tournament performances showed that juniors Erika Chick and Elizabeth Malone are getting even faster in victorious swims.

The duo dominated the field at the Division II Southwest District Meet, clinching three titles among them en route to their third appearances at the state finals. They are favorites to win their events at the state tournament this weekend in Canton.

At the meet, held at Miami University, Chick won the 200-yard freestyle in 1:51.61, a new district meet record and her fastest time ever for the event. She also clocked her personal best for the 500-yard freestyle, in 5:01.21. Chick automatically qualified for state in both events.

To Chick and Malone, who have taken first or second at all seven meets they swam this season, the district meet was another opportunity to excel.

“I was trying to go for a time,” said Chick about her long-distance 500-yard freestyle swim. “My goal is just to race and try to win.”

“Most of the time I can’t think at all — I just think about getting to the wall,” said Malone of her 100-yard butterfly sprint. “I just wanted to do better than last year.”

Chick brought home bronze medals for her two events at last year’s state tournament, while Malone took fifth in the 100-yard butterfly at the state tournament as a freshman. With both eyeing the podium in Canton this weekend, they’re remarkably calm preparing for the most competitive field they’ll face all year.

“This week I’m just going to practice to get mentally ready,” Chick said. “Experience helps. I’m not as nervous going in as I was freshman year.”

Malone, who admittedly gets nervous before her races, will be regaining some energy during the week to prepare for the big swim. Proud of the district performances was first-year Yellow Springs swim coach Andrew Sellers.

“They swam past expectation,” Sellers said. “Both of them went faster than they went at states last year.”

The team’s 200-yard medley relay also swam at districts after clinching the conference title and qualifying at sectionals. Chick and Malone joined freshmen Zoey McKinley and Rachel Meyer in the relay, with Chick swimming the backstroke, McKinley the breaststroke, Malone the butterfly and Meyer the freestyle. Coming into the race seeded 24th (the final position), the relay finished in 21st place with a time of 2:07.10.

It was the first girls’ relay the team has fielded in recent memory and a great opportunity for the freshman swimmers to learn from their talented teammates.

“It’s really nice for us to have [Chick and Malone] to support us and push us to be our best to improve our relay,” said McKinley of the relay’s success over the course of the season. “It really helps to make me not want to let them down.”

After placing second, third, fourth and fifth with the relay over the course of the season, the relay team finally clinched a victory at the Metro Buckeye Conference championships with a time of 2:08.4, which qualified them for sectionals. They were the last team to qualify for districts.

“It was a really cool experience,” Meyer said of the relay swim at districts. “They announced everyone’s name when they were in the water — it was really exciting.”

Bringing just four swimmers to compete at this year’s district meet, the Bulldogs finished in 11th place out of 30 participating teams.

“It’s a pretty small group, but we always show up,” Malone said of the team.

This swim season has been marked with impressive performances for the five girls on the team and the lone boy swimmer, Taylor Ford, who achieved personal bests in the 50- and 100-yard freestyle and placed sixth in the 100-yard breaststroke at the Clark County Invitational.

The swim was one of the highlights of Coach Sellers’ season, along with Chick’s record-setting district swim, the remarkable improvement of McKinley and Meyer, and Malone’s come-back swim at the Metro Buckeye Conference meet after dropping out at the final round of the Coach’s Classic due to a stomach illness.

After Malone swam to a second place finish in the 100-yard butterfly on the first day of the Southwest Ohio Coach’s Classic, she was unable to compete in the rest of tournament. By the next week Malone would have to be in top form for the conference meet, which began the run-up to the state tournament.

“She came back with her head held high and shoulders pinned back, ready to go — and carried that confidence all the way through,” Sellers said. Malone finally broke a minute in the 100-yard butterfly, and kept it under that time for the next three weeks, something she had been unable to do earlier in the season. “There was a whole shift in her attitude,” Sellers said.

Malone went on to win the 100-yard butterfly and the 200-yard individual medley with new meet records at the conference tournament.

Malone began swimming when she was seven, and between high school practices and practices with her club team, the Springfield YMCA, sometimes spends up to 30 hours per week in the water.

“The more and the harder you practice, the better you get,” Malone said of her busy practice schedule. As for her love of the sport, it comes down to competing to win.

“I’m really competitive so [swimming] kind of keeps me going,” she said. Malone hopes to swim at the college level.

Chick also finds herself swimming two practices per day as she swims with the Dayton Raiders. Chick started with the Yellow Springs Seadogs at age six and had her best swimming performance as a 14-year-old when she won the Junior Olympics in the 100- and 200-yard freestyle. Despite the pressure, Chick still loves the sport, and also has hopes of swimming at college. She has been contacted by several colleges but has not yet decided where to go.

“I think she is very focused,” Sellers said of Chick, adding that she likes clear instructions about what to work on. Sellers put Chick first in the relay because she said she didn’t want to do it unless they could win. As for Malone, “She’s a very confident swimmer,” Sellers said. “She knows what her abilities are and knows how to use them.”

Weighing in on their first-year coach, the swimmers appreciated Sellers’ experience as a talented swimmer at a large school and his specific suggestions for improvement.

“I really thought he was very knowledgeable and he really improved my stroke techniques,” McKinley said.

Sellers is pleased with his swimmers and looks forward to building the program.

“It was a lot of fun working with such a small group who really wanted to be there, really were about swimming and had fun,” Sellers said. “I think a lot of them had a chance to grow a lot and they seemed to be very cohesive — to me I think things can only go up.”

With strong performances at the state tournament this weekend, Chick and Malone can take the program even higher.

Click here for a highlight video from the district meet.