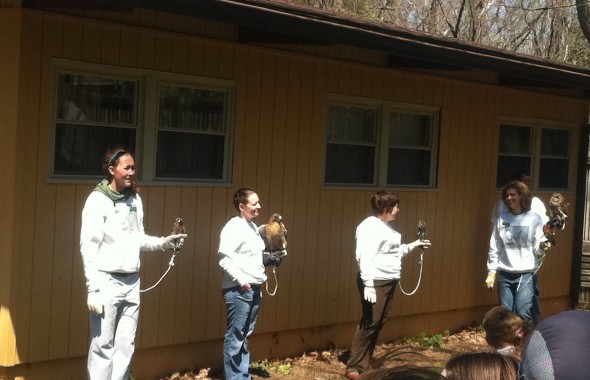 Raptor Center staff introduced some of the winged full-time inhabitants of the center before the release of their rehabilitated counterpart.

As part of a series of events celebrating Earth Day, the Glen Helen Raptor Center released a rehabilitated red-tailed hawk back into the wild on Sunday, April 17. 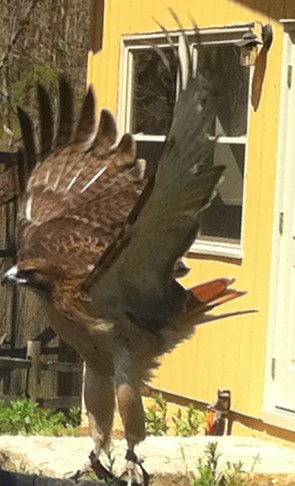 Birch, another red-tailed hawk, was one of the birds not eligible for release.

The program began as Raptor Center staff introduced several birds who, due to extensive injury or inability to hunt, were not eligible to be released.  The birds included an American kestrel, a red-tailed hawk, two screech owls, a barn owl, a barred owl and a great horned owl.

Raptor Center Director Betty Ross explained that the red-tailed hawk that would be released was brought to the center by a wildlife officer from Mercer County. The hawk had suffered an injury that caused severe neurological damage, and when it came to the Raptor Center, could not stand or even feed itself. Raptor Center staff worked closely with the bird, and it had regained enough strength by last winter to be released. Staff decided to wait until spring to release the hawk, to give it a better chance at survival.

Before releasing the hawk, Ross recited a section of lyrics from “Wild Again,” a song by Douglas Wood, which was commissioned by the National Wildlife Rehabilitators Association:

With our brothers and sisters we all share one world
And there’s one common spirit within.
It’s the wild things that help us survive on this earth
Without them we couldn’t begin.

So once in awhile we’ve a chance to give back
Just a little from all that we take.
And a wild one returned to the circle of life
Is a part of the world that we make.

For more information on the Raptor Center and its rehabilitation program, visit antiochcollege.org/glen_helen/raptor_center/ .