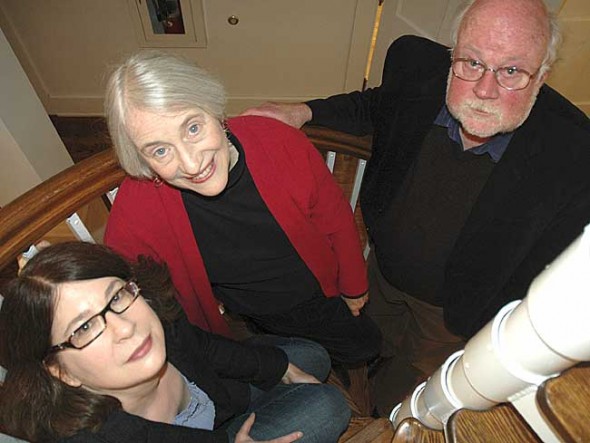 Morgan Fellows Jean Gregorek, left, Anne Bohlen and Scott Warren have been busy developing the curriculum and programming events at the revived college since September 2009. Their jobs come to an end on June 30. (Photo by Diane Chiddister)

It didn’t take long after Antioch College became an independent liberal arts college in September 2009 for the revived college’s presence to be felt in the village. In November, the new college sponsored a symposium on immigration, followed soon by symposia on Native American identity, restorative justice and the future of the humanities.

In January 2010, the college sponsored “Landmarks,” an art exhibit on location and dislocation in Ohio, followed by a retrospective of local painter Robert Whitmore and a dialogue on the Republican Party in Ohio.

More college-sponsored cultural and intellectual events took place in summer 2010, with a Herndon Gallery exhibit and series of films and dialogues focused on civil rights and Freedom Summer in 1968. In the fall of 2010, the college sponsored a film series focused on the history of the gay rights movement, a new art exhibit featuring recent Antioch College graduates, talks by nationally known multimedia artists and a panel discussion on interfaith issues.

And things really kicked into high gear in winter 2011, when Antioch College sponsored “Democracy in Jeopardy,” a film series on challenges affecting democratic government, the Fireside Readings featuring writers reading their original work, a Future of Education series of talks, co-sponsored with the Yellow Springs Board of Education, and an exhibit by Columbus-based artist Sidney Chafetz.

The college’s next big event — and the last one on the near horizon — is the art/poetry exhibit ”Rhythm in Structure,” by New York artist and Antioch College graduate John Sims, which opens May 18, with a reception Saturday, May 21, from 6 to 9 p.m. at the Herndon Gallery.

While the sheer number of happenings since fall 2009 might indicate the presence of a busy college public relations department, most events have been organized by two individuals, Anne Bohlen and Jean Gregorek, both former tenured Antioch College faculty members who were named Morgan Fellows after the college revival. Morgan Fellow Scott Warren also participated in programming efforts, as did Beverly Rodgers before she left last year for another job.

The new college’s programming appears to have been a success, according to former Antioch College Interim President Matthew Derr in a recent e-mail from his new home in Ann Arbor, Mich.

“I believe the program was well-received and that the quality of the programing that Beverly, Anne, Jean, Scott and those with whom they worked produced was superb,” Derr wrote. “It certainly enriched my life and I enjoyed the experience of seeing so many well-attended events on campus and in town.”

Bohlen and Gregorek also feel satisfied with the results of their efforts.

“Looking back, I’m quite proud of the high quality of the art exhibits, speakers, readings and film series we’ve produced,” Gregorek wrote in a recent e-mail. “One of our goals has been to build relationships with nearby academic institutions, community organizations, and the diverse populations within the Miami Valley. I think we have made some real progress in that direction…”

And according to Bohlen, “To expose people to so many different ideas is a pleasure. That’s one of the things a college should do.”

While the college will continue to sponsor events, it will do so without the help of Bohlen, Gregorek and Warren, whose jobs end on June 30.

Bohlen hopes that Antioch continues to serve the cultural and intellectual role it has played in Yellow Springs for the past year and a half.

“There’s a tremendous number of interesting people in the region,” she said. “Some of the connections we’ve made could be built on, and contribute to the liveliness of Antioch in the future.”

A presence for the college

When the college gained its independence from Antioch University in September 2009, former Interim President Derr believed the revived college — even with only its small staff of about 30 — should step quickly into the role of a promoter of new ideas and critical thinking.

“I believed that colleges have a civic duty to contribute to the cultural and academic life of the community,” Derr wrote in a recent e-mail. “I also felt it was important to have activity on campus and to bring intellectual and artistic life back to the college swiftly because the experience of the past few years had been so dffiicult for the alumni, friends and Yellow Springs.”

The fellows, all of whom are former tenured Antioch College faculty, seemed best suited for programming cultural and intellectual events because “they were distinguished scholars and were familiar with the resources and relationships the college maintained over decades,” Derr wrote.

But programming was only a part of the Morgan Fellows responsibilities when the college first gained independence. The fellows initially had on their plate jetting around the country to meet with alumni groups, then creating, with input from Derr and alumni, the college’s new curriculum. The Morgan Fellows were also involved with preparing the college’s application for approval from the Ohio Board of Regents, along with the preliminary information form for the North Central Association, the regional accrediting agency.

“The other substantial work accomplished by the Morgan Fellows has much to do with how far the college has come and its progress toward degree-granting authority, and the early steps toward accreditation could not have happened without them,” Derr wrote.

While also working on curriculum development, Bohlen and Gregorek took on the bulk of the programming responsibilities after Rodgers later left for another position. Warren was busy developing curriculum for both philosophy, his area of specialization, and the sciences, according to Bohlen, although he played a significant role organizing an interfaith dialogue and a program on the history of the Republican party in Ohio.

Overall, the organizers sought topics that seemed significant and relevant to the region and to today’s world, Bohlen said.

“We wanted to do programming about issues we felt people should know more about, debates going on in society, what was happening in the world,” she said.

The Morgan Fellows also felt inspired by the community outreach and programming that Nonstop Institute had initiated when it formed after Antioch closed in 2008, Bohlen said.

Many Nonstop members, including former Antioch College faculty, stepped up to help with the revived college’s events, she said, including technology specialists Michael Casselli and Brian Springer, filmmakers Chris Hill, Bob Devine and Dennie Eagleson and artist Migawa Orimo, who designed most of the event publicity.

Because the new college supported the programming financially, the Morgan Fellows had a budget for the events, something the former Antioch College professors had not had for years before the college closed in 2008, according to Bohlen. The Morgan Fellows chose to use the bulk of the budget to bring in speakers, plus some for publicity materials, according to a report on the programming submitted to Antioch College President Mark Roosevelt.

While the college will have six tenure-track faculty members when its first students arrive in September, the Morgan Fellows will not be among them. Of the six new positions, former Antioch College tenured faculty members were qualified to apply for two, in the fields of philosophy and literature.

While Warren, who taught philosophy at the college for 14 years, applied for the position in philosophy, he was not hired. And Gregorek chose not to apply for the position in literature, which she taught at Antioch College for 16 years. According to Gregorek, part of the reason she didn’t apply is that she doesn’t want to work for a college not in good graces with the American Association of University Professors, or AAUP, the national advocacy organization for college professors. The AAUP’s position, which it has communicated to the revived college’s leaders, is that when a closed college re-opens, it has an ethical obligation to automatically re-instate former tenured faculty in positions for which they are qualified. However, Antioch’s leaders felt that national searches were necessary for all tenure track positions.

“I am deeply disappointed in decisions made by the interim college administration this past year around the hiring process for new faculty,” Gregorek wrote in a recent e-mail. “We feel that the tenured status we earned at the college, our indispensable participation in the challenging revival of the college, and our demonstrated long-term commitment to the college’s mission, should have at least ensured us a place at the table in conversations as to how the institution went forward.”

After 17 years teaching at Antioch College and almost two years as a Morgan Fellow, Bohlen, a filmmaker and teacher of media arts, is also sorry to see her job end, and believes that former faculty would enhance the college with their intimate knowlege of Antioch’s unique educational model.

While former Antioch College tenured faculty member Hassan Rahmanian has been hired as the new college’s dean of curriculum, assessment and interdisciplinary studies, so far no other former tenured faculty have been hired.

Antioch College has filled three of its six tenure-track positions so far, and expects to hire the remaining three positions soon. One of the new faculty, David Kammler, who will teach chemistry, taught for five years at Antioch before he left for another job shortly before the college closed.

College leaders have said they will also be hiring guest faculty for limited periods of time, along with some adjunct faculty, although at this point it’s not clear what fields the guest positions will be in, nor for how long guest faculty will be hired, according to Antioch College Director of Communications Gariot Louima recently. Former tenured Antioch College faculty are welcome to apply for guest faculty positions for which they’re qualified, Louima said.

When the Morgan Fellows leave the college, the new faculty, students and the dean of community life, who has not yet been hired, will be responsible for programming events, Louima said.