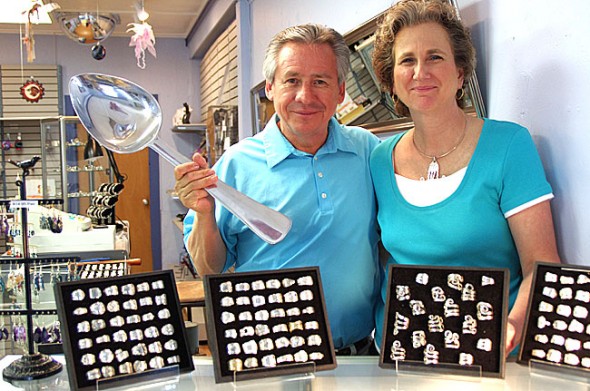 Jose and Connie Soto recently opened Artistic Silver on Dayton Street at the site of the former Sugar Cubes. The store sells Jose’s original jewelry, along with other offerings. (Photo by Sehvilla Mann)

A new jewelry store downtown has its origins in Jose Soto’s desire, 38 years ago, to capture the attention of a woman who would later become his wife. He made her a present of a silver ring he’d fashioned from a spoon; as the recipient, Connie Soto, described it, “it was in the rough.”

“It was square — it wasn’t even round,” she said. Still, that didn’t stop her from finding it very endearing. The two began dating and married a couple of years later. Meanwhile, Jose kept making rings, improving and refining his craft, until he became highly skilled in a certain specialty: making jewelry from spoons and forks. After years of selling his work at arts and crafts fairs, he and Connie Soto have opened their own business, Artistic Silver, at 134 Dayton Street.

It was a logical next step from selling at special events.

“People would ask us at our shows all the time, ‘Do you have a shop?’” said Connie in a recent interview.

This spring, after Jose retired from his career as an electrician, they began to seriously consider the idea. The Sotos, who are from Piqua, said they knew Yellow Springs would be the perfect place to open a store.

His work has long had a presence in the village; he’s been a vendor at Street Fair for the last 17 to 18 years, he said, and Pangaea on Xenia Avenue has carried Soto’s rings for more than a decade as well.

The concept became reality several months ago when downtown real estate developer Bob Baldwin showed them a space on Dayton Street that was formerly occupied by Sugar Cube. They viewed it on a Thursday evening and “decided on the way home we wanted it,” said Connie. By the following Saturday they were taking measurements, and that Sunday they signed a lease. After about six weeks of renovations, they opened in mid-May.

The store’s main feature is Jose’s silverware jewelry. The selection ranges from the understated but stylish rings he makes from the curled ends of spoon-handles, to eye-catching pendants made from forks, the flattened tines of which are curved into elegant waves and swirls.

Sometimes, people bring them “family silverware” they’ve inherited so Jose can turn it into jewelry; this allows family members to each “have one [piece of silverware] as a remembrance” of a special set. The Sotos said they are happy for customers to bring them sterling silver and silver-plate forks for custom pieces. (Spoons and forks made from stainless steel generally aren’t suitable, though, since the metal is much harder and therefore tougher to manipulate than silver.)

In addition to Jose’s work, Artistic Silver also carries a variety of practical and decorative items, most of which have been made regionally: leather bracelets made by two local artisans, handcrafted duffel bags, handbags and purses, recycled paper notebooks and some lawn and garden decorations.

In their first few weeks, “everybody’s been very supportive,” said Jose. Other village shop owners have offered “moral support” and have stopped in to learn about Artistic Silver’s inventory, so they can pass the information on to their own customers who might be interested in the new store. Likewise, said Connie, “If we don’t have it, we send them elsewhere.” All the jewelry stores ultimately end up cooperating in this way because they all offer different kinds of work, she said.

The level of business they’ve received has been encouraging, they said. Awareness of the store seems to be spreading, and “each weekend’s getting better,” added Jose.

Just after they had leased the storefront, Connie was laid off from her job. Rather than seeing this as a discouraging development, they took it as an indication that they were on the right track.

“It was kind of like, ‘that’s what we’re supposed to do now,’” said Connie.

From their perspective, Jose said, “things happen for a reason…we try to make it work and see what happens…we always try to look on the bright side of things.”

Looking towards the future, they said they would like to increase their stock over time.

“We will try to expand more into different gifts,” said Jose, who added that they’ll keep their eye open for “unusual jewelry” they might want to carry.

This week, Jose was busy making fork and spoon rings and bracelets for Street Fair. The Sotos sold Jose’s jewelry at three different booths on fair day, and Artistic Silver was open for the event as well. Otherwise, the store’s current hours are Tuesday–Friday, 1–5 p.m.; Saturday, noon–6 p.m., and Sunday, 1–5 p.m.; On Third Friday Fling nights, the store will be open late.