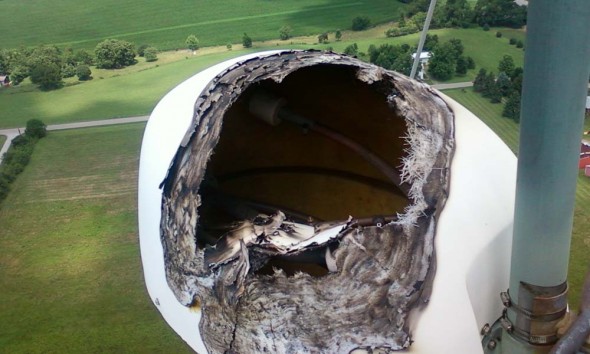 Lightning damage to the WYSO antenna and the fiberglass casing that covers it. The antenna bay is 405 feet above the ground, attached to the WYSO tower on Clifton Road south of Yellow Springs. (Submitted photo)

WYSO back on the air

Public Radio station 91.3 WYSO went off the air Monday, July 11 at 9:15pm after taking two direct lightning strikes: one at its studios in Yellow Springs and one at its tower south of town.

“Shakin’Dave” Hussong was at the control board in WYSO’s main studio when lightning struck. He was not injured. A Charlie Musselwhite blues harmonica tune was playing at the time.

As of late Tuesday afternoon, the FM signal was not restored but the on-line stream was working.

WYSO Chief Engineer James Stitt says the top bay of the WYSO antenna, which is located on a tower on Clifton Road, “took a direct lightning hit and was torched. Obliterated. Incinerated. It’s not reparable.”

But, Stitt said that a loaner antenna is on its way to Yellow Springs “and we should be back on the air this week.”

The WYSO studios on East South College Street also took a lightning strike, though Stitt says that strike is harder to pinpoint. “We also experienced lightning damage at the studio, which took out all three audio consoles, the automation computer and dozens of other ancillary pieces of equipment.”

WYSO will continue to stream all programs programs online at wyso.org, “as long as we have the technical gear to do it,” says general manager Neenah Ellis, “and that includes network programs, too.”

“This might slow us down, but it won’t stop us,” she said “We’re innovative,” she said, “we’ll keep it going.”

Ellis couldn’t say exactly how much it would cost to replace destroyed equipment. “It will be a while before we have a final figure,” she said.

Ellis said listener response has been strong. “Thanks to everyone who’s sent us good wishes.”