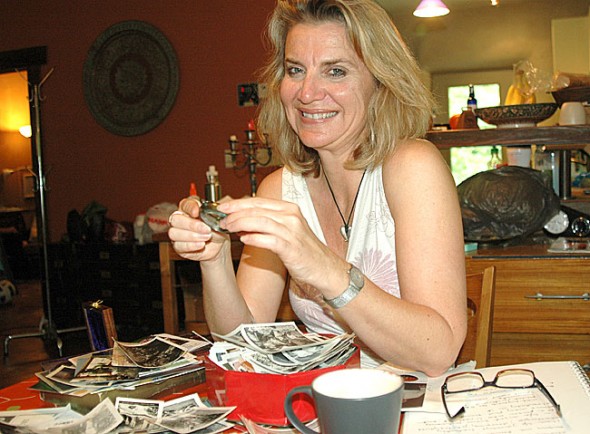 Everyone has a story to tell

History is made up of memories, which, unless they are somehow documented, are fleeting at best and easily lost altogether. While the histories of the rich and famous are often documented without question, Yellow Springs native Holly Hudson is hoping to help those not quite famous but no less valuable individuals, families and business owners who would like to concretize some memories of their own. This summer she launched a new business, Bespoke Memoirs, to offer personal, corporate memory and memoir writing services.

The British use bespoke to refer to a custom-tailored suit, and Hudson aims to use her Bespoke business to tailor memoirs to suit her clients’ needs. The format could range from an entire personal history ghost written from interviews, an online collage of written stories, photos and letters, or a direct audio transcription, she said. Or it could be something else entirely, depending on what the clients or businesses want to say about themselves and how they want to say it.

Some people may feel shy about recording their memories, or feel they haven’t accomplished anything worth talking about.

“But invariably, everyone has something extraordinary to tell,” Hudson said. “And while others may think a story is ordinary, to the family [of the storyteller] it is a piece of history.”

Hudson is excited to give those kinds of stories a life.

“It’s a gift to be able to help someone preserve their legacy for their family.”

Hudson has always been a writer. After working for nearly 20 years as an actress and television producer in New York City and London, she returned home to help direct the Antioch Writer’s Workshop and to write and produce for Mad River Theater Works. Most recently she has made her living as a freelance grant writer. The personal memoirs are likely to mirror the complexity and interest of the stories she has helped to produce commercially, she said, adding that she is eager to see what material comes her way.

“It appeals to me — hearing people’s stories, what makes them tick, and what they’ve done in their lives,” she said in an interview last month.

She has already begun to work with one local resident who, at 90 years old, wants to create a memoir of her life growing up on a Midwestern farm during the Depression. And she wonders about the personal reflections of others who have lived through a significant period, such as the Vietnam War or the Holocaust. Hudson is interested in giving people who can speak personally about those kinds of experiences an opportunity to set the record straight, or tell their children and grandchildren what they went through and how times have changed, she said.

Hudson has a story of her own, which while not systematically documented, contains evidence of her family’s long history in Yellow Springs. Her parents, Jean Barlow and Ben Hudson, met in Yellow Springs in 1940 while campaigning for Norman Thomas, a six-time presidential candidate for the Socialist Party of America. They met through Antioch College President Arthur Morgan, though Ben later became a conservative, Hudson said. Jean Barlow was later the mayor of Yellow Springs, as well as a poet and author. While the family did not record a memoir, in 1993 Hudson and her brother Jon posthumously published a book of Jean’s poems, entitled, Foreverness, the Collected Poems of Jean Barlow Hudson, in which a little bit of Jean Hudson still lives.

Bespoke services are available locally and via the internet and Skype as well, Hudson said, and she hopes to be able to serve people and businesses globally to tell their stories.