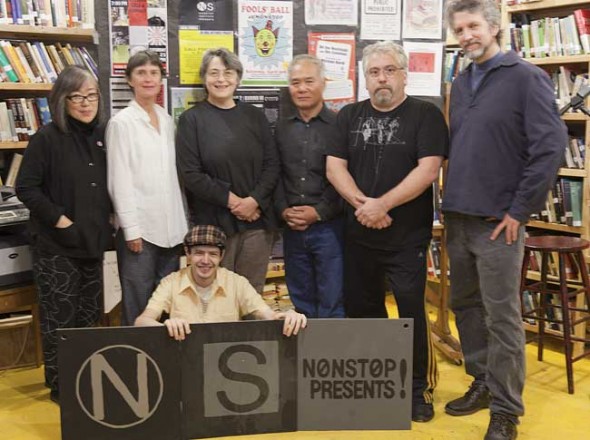 The Nonstop Institute of Yellow Springs will leave its Millworks location the end of November, but members plan to continue sponsoring events of artistic and cultural significance in the village. Pictured above are, standing from left, Nonstop members Migiwa Orimo, Jill Becker, Chris Hill, C.T. Chen, Michael Casselli and Dan Reyes and seated, Lincoln Alpern.

Nonstop in a transitional time

The artists and educators of the Nonstop Institute of Yellow Springs are experts at being nimble, having transformed their mission several times in the past. Initially focused on carrying on the traditions of Antioch College after the college was closed, Nonstop later shifted focus to facilitating public discussions on artistic and cultural topics.

Members of the nonprofit group will at the end of November face another transition, as they move out of their physical facility at Millworks on Walnut Street due to financial constraints. While the group will no longer have a physical home, members plan to continue their mission of enhancing public dialogue on topics of local interest, according to organizers.

“There are some remarkable capabilities represented in this community; the challenge is finding ways to best facilitate their expression and use,” said Nonstop member Dan Reyes recently. “A nomadic Nonstop certainly can contribute to and be available for helping with such efforts.”

The group plans to sponsor about four artistic or cultural events per year at downtown locations, according to member Michael Casselli, a former NYC resident and theater designer who designed the Nonstop space.

“Now we can continue on and be more flexible,” Casselli said. “We’re going back to our original model of holding events downtown.”

See a more detailed story on the Nonstop transition in the Nov. 24 News.