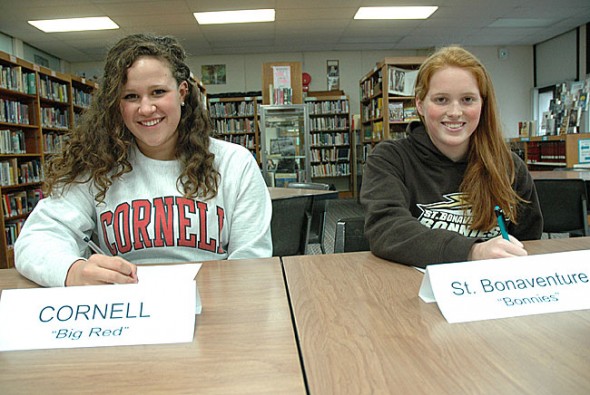 Before he even came to Yellow Springs High School, first year athletic director Steve Rossi had heard about two standout Bulldog athletes — Erika Chick and Elizabeth Malone. The state-qualifying swimmers, who together hold 11 individual records at YSHS, will next year swim at NCAA Division I colleges. The seniors committed this month.

Chick joins the Big Red at Cornell University in Ithaca, N.Y., an Ivy League school, to swim the freestyle and 200-yard butterfly. Malone will swim the butterfly as a Bonnie at St. Bonaventure University in Allegany, N.Y., which is part of the Atlantic–10 conference. The schools are just 140 miles apart.

“Between the two of them they own just about every school swimming record,” Rossi said this week. “For such a small school to have two nationally-recognized and state-qualifying swimmers is incredible.”

Both Chick and Malone are excited to take their swimming to the next level and relieved that the college selection process is over.

After fielding recruiting calls from several colleges, including University of Pennsylvania and University of Chicago, Chick recently visited Cornell and signed a commitment before she left campus. Though Ivy League schools don’t offer athletic scholarships, a financial aid package was arranged for Chick, who plans to study biology.

Malone had offers from Eastern Michigan and Ashland University before a visit to St. Bonaventure sealed the deal. She will have a full athletic and academic scholarship and hopes to major in sports medicine.

“It was a really great fit,” Malone said of the campus of 2,000 students in a rural setting. “I’m looking forward to the team and traveling to meets.”

But before they swim in college, Malone and Chick are eyeing state titles at the state meet in February. At states, Chick has placed as high as third in her events, the 200- and 500-yard freestyle, while Malone has finished fourth in the 100-yard butterfly and 12th in the 200-yard individual medley.

“I hope there’s some competition this year,” Chick said of district tournament, where in 2010 she clinched two individual titles and shattered the meet record in the 200-yard freestyle, in 1:51.61. Malone won the 2010 district title in the 100-yard butterfly with 57.63.

The duo also hopes to propel its 200-yard medley relay team to states this season. The relay, consisting of Chick, Malone and freshmen Zoey McKinley and Rachel Meyer, finished in 21st place at districts last season with a school record-setting swim.

“I’d like to get my best times and shoot for higher,” Chick said of this year’s swim season, which kicks off on Dec. 16 at the Shawnee Invitational at Wittenberg University.

Chick and Malone attribute their impressive high school achievements to commitment and “a lot of practice.” But their hard work has paid off handsomely in nearly free education and an opportunity to swim in college and beyond, perhaps even at Olympic trials.

“The whole time it’s been to get a scholarship,” Malone said of her high school career. “It’s important to do well in college, too.“