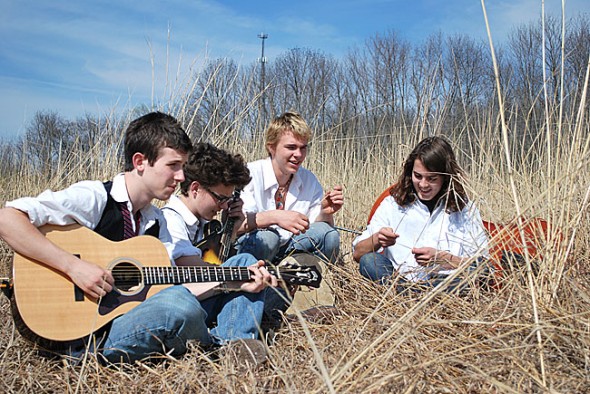 Despite both growing up in Yellow Springs, local teens Sam Salazar and Rory Papania never really met. But after attending Friends Music Camp together in the summer of 2009 in eastern Ohio, they came back and started picking a ukulele and guitar in front of Tom’s Market and the bluegrass-folk band Wheels was born.

“If not for Friends Music Camp, Wheels definitely would not have been a band,” Rory Papania said this week, adding that the camp, located in the Appalachian foothills of eastern Ohio, was an “incredible experience” that exposed him to bluegrass and folk styles.

A suggested donation of $10 will go towards need-based scholarships for the four-week summer camp for 10- to 18-year olds, which will cost $2,010 per camper in 2012. Next year’s camp takes place from July 8 to August 5 at Olney Friends School, a Quaker boarding school in Barnesville.

“It inspires young people in their musical growth and to make their lives count,” Champney said. “It’s a life-changing experience.”

Wheels members can attest. Salazar, who has attended the camp for the last five years, said it helped him “expand his musicality” and become more comfortable in himself.

“It really showed me that being yourself is totally okay, that you don’t have to try to be someone you’re not,” Salazar said. “It helped me develop as an individual — I don’t know what I would do without it.”

Wheels members are not the only Yellow Springers to have benefitted from the camp. Last year 17 of the 80 campers were from the village and many more heard the campers perform at their annual summer concert in Yellow Springs, with proceeds supporting Glen Helen.

This year’s musical line-up includes world-class musician Wendy Champney, who grew up in Yellow Springs and is a member of the Carmina Quartet chamber music group based in Zurich, Switzerland, with her daughter, Chiara Enderle. New York City professional musician Martha Hyde, who also grew up in Yellow Springs, will perform along with vocalist and four-year Friends Music Camp teacher Minnita Daniel-Cox. Daniel-Cox will perform vocal pieces with text written by Dayton poet Paul Lawrence Dunbar.

One of many talented musicians who teach at the camp, Daniel-Cox is a professional vocalist with a doctorate in vocal performance and a teaching position at the University of Dayton. Daniel-Cox said she has witnessed campers improve as musicians and individuals.

“It’s the balance of musical excellence with positive social integration and making responsibility a priority,” that makes the camp unique, Daniel-Cox said. In addition to improving on their instruments, campers learn discipline, initiative and the benefits of hard work, she said.

The music instruction is rigorous. Campers get two private lessons per week, receive coaching as part of various ensembles and sing in the chorus. Impromptu jam sessions are common in the dormitory and on the lawn. Papania recalled one evening where everyone went into the one-room building on campus known as the “music box” and played whatever instruments were available, whether or not they knew how to play them.

“It’s one of the few places I’ve been where everyone has a rudimentary knowledge of music, so you can play with anyone there,” added Wheels bass player Crawford, who attended the camp after joining Wheels. Champney said some campers say they learn more in the four-week camp than they do the rest of year.

Champney founded the camp in 1980 because of the lack of positive camp opportunities for her daughter, Wendy. Champney’s own life was changed by Quaker youth activities that included weekend work camps in the late 1940s painting the slums of Philadelphia.

While the Friends camp is influenced by Quaker values, its leaders do not promote any religious dogma, Champney said. The day begins and ends with “collection,” a mostly silent group meditation that Wheels members said was a peaceful and bonding experience, even for those who aren’t Quaker.

“Collection is fantastic whether you’re Quaker or not,” said Scott, who also later attended the camp. The Quaker culture promotes honest interactions and friendship, he added, making it “the perfect environment to make and play music.”

Wheels has gone on to play shows around Ohio and West Virginia, open for national act Ekoostik Hookah and, earlier this year, release its debut album, “Fields on Fire.” As they write more original tunes for their upcoming second album, Wheels members continue to be grateful for their formative Friends Music Camp experience.

“It really changed the music I listened to and appreciated,” Papania said. “It’s been an incredible experience. It’s like a second home to me.”