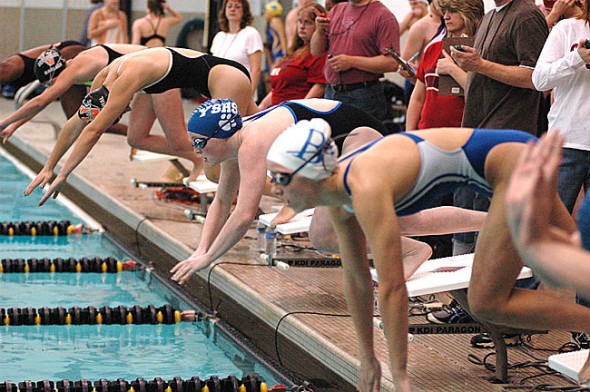 Senior swimmer Elizabeth Malone took off from the starting block en route to a new school record in the 50-yard freestyle at the Wayne Invitational at Wright State University last weekend. Malone finished second in the event in 25.87 seconds. (Photo by Megan Bachman)

Malone swam the fastest 50-yard freestyle in Yellow Springs High School history, in 25.87 seconds, at the Wayne Invitational at Wright State. Chick took the new YSHS record in the 100-yard freestyle at the Shawnee Invitational at Wittenberg, unseating a 12-year-old record with her 55.84 second race. Together, Malone and Chick now hold 12 of the 16 individual swimming records at YSHS.

Chick and Malone led the team to a fifth-place finish at the Wayne Invite, among 11 schools and 201 participating swimmers, and were members of a fifth-place 200-yard relay team at the Shawnee Invite (2:13.09). Swimming with them were Zoey McKinley and Rachel Meyer.

The YSHS girls basketball team (3–5, 1–4) notched two more victories on the season with back-to-back wins over Jefferson in recent weeks. After defeating the team on their own turf, 52–34, thanks to a breakout performance by Paloma Wiggins (12 points, 6 rebounds), the Bulldogs went on to win at home, 48–21.

At home last week, the Bulldogs charged off to a 31–7 lead by half time. Allen, who regularly scores in the double-digits, had a season high of 17 points on the day. Martin added 13 points and seven assists, Kennedy Harshaw came in with nine points and Ayers contributed seven.

The YSHS boys basketball team fell to 2–6 on the season after the two more close losses this week. Most of the team’s losses this season have been by less than 10 points.

Stivers, however, couldn’t keep Greg Felder Jr. from lighting it up on offense. The point guard scored a career high of 28 points that night. Cole Edwards followed with 16 points and Robbie Jones added 12.

“[Trumbull]‘s defense was outstanding,” Coach Brad Newsome said. “It’s an example of what we need from every player on the floor defensively.”

Robbie Jones added 11 points and Greg Felder Jr hit for 13 on the night. Austin Pence added two points for the Bulldogs while Jared Scarfpin played solid minutes on offense and defense for YSHS.

While the boys season record has dropped to .250 overall, Coach Newsome said there is still a lot of fight left in the Bulldogs and feels like their hard work and improvement will start showing up on the scoreboard and in the win column.

Meanwhile, YSHS is currently fifth in the area in scoring at 57.3 points per game. Roland Newsome leads the area in rebounds with 11.7 per game. Robbie Jones (10.5), Felder Jr. (16), and Newsome (14) are among the area’s leading scorers and Felder Jr. is one of the assist leaders, averaging five per game.

The McKinney eighth-grade boys basketball team won two more games this week to improve their record to 5–1 (4–0). Against Northwestern, Rodman Allen and Kaner Butler netted 17 points a piece, while Isaiah Taylor scored seven in the 49–34 win. In a conference matchup with Middletown Christian, the Bulldogs were neck-and-neck with their opponents until the McKinney team outscored their opponents 27–11 in the second quarter and went on to win 59–45. Allen led scoring with 18 points on the night, followed by Butler, with 10, and Taylor, who had eight points.

Elizabeth Smith once again ran the court in the McKinney girls basketball team’s game on Saturday against Northwestern. On both offense and defense, the seventh-grader dominated. She ended with 16 points on the day, though the team fell 43–22 to the visiting foe.

Ashley Longshaw contributed three points, Anna Williamson had two points and Kaliyah Fulton added a free throw to round out scoring for the Bulldogs. See more photos from the game at the Bulldog Sports Sunday at https://www.ysnews.com .