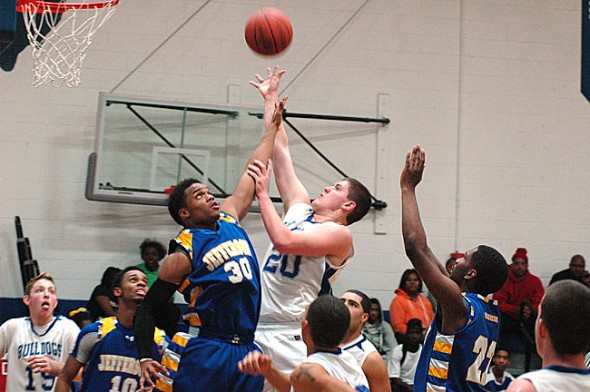 With wins over Xenia Christian and Middletown Christian, they improve to 5–6 overall (3–3 in the Metro Buckeye). First year coach Tim Barga’s team rebounded from a five-game losing streak in December and, just in the last week, moved from fifth to third place in the MBC.

The Bulldogs pulled off a narrow victory at home against Xenia Christian, 36–33, having outscored their opponents in four straight quarters. Point guard Maryah Martin led scoring with 10 points (including two three-pointers) followed by Brianna Ayers and Angela Allen, who had eight each. Martin, currently second in the MBC in assists (averaging 5.3 per game), dished out five more on the night. Allen and Kennedy Harshaw held the boards with 25 rebounds between them. Ayers finished with three steals.

At Middletown Christian, Yellow Springs once again got off to a strong 15–3 start and kept their opponents at bay to win 38–32. Allen had an impressive night. She scored 14 points and brought down 16 rebounds. Allen is fourth in the conference in rebounding, averaging 9.1 per game. Harshaw also played well, scoring 11 and getting seven take-aways.

Newsome scored more than half his team’s points on the night. It was the fifth-best performance in YSHS boys basketball history. Charlie Coles, who averaged 42.1 points per game during his YSHS career in the 1950s, holds the record with 55 points.

With several Bulldog starters — among them Greg Felder Jr., Austin Pence and Robbie Jones — on the bench from injury or foul trouble, Newsome stepped up to put his team within seconds of victory. Newsome, in the post position, was unstoppable. He scored his team’s first 14 points and kept lighting up the scoreboard from underneath the hoop.

Later in the game, when Middletown Christian began fouling him, Newsome just added more points from the freethrow line. He ended the night 16 of 25 from the field with two three-pointers and eight free throws. Newsome raised his scoring average from 13.3 to 17.0 with the performance. He’s also leading the area with 12.8 rebounds per game.

Despite the stellar performance of his player and son, Newsome remains frustrated by the loss. The Bulldogs, after all, had a lead of 25 points at one point in the game and were up by four with seconds remaining. Jacob Trumbull, Jared Scarfpin, Cole Edwards and Jake Fugate each stepped up with key plays that gave the Bulldogs a chance to win the game. But YSHS fouled a Middletown Christian player at the end of regulation, leading to a four-point play that tied up the game. The home team sealed the win in overtime.

“The only piece of the puzzle that’s missing for us is our defense,” Newsome said. “We’re not getting defensive stops during key points in the game.”

Though Newsome’s team leads the area in scoring, with 61 points per game, and three players averaging double digit scoring, the team is just 2–8 on the season (1–4). The Bulldogs have now lost six games in a row.

Later in the week the boys basketball team fell to Jefferson, 78–49. After taking an 11–10 lead in the first half, the Bulldogs allowed 18 unanswered points and couldn’t make up the deficit. See a gallery of photos from the game at ysnews.com.

Known as the “coaches classic,” the Southwest Ohio High School Swimming and Diving Classic in Cincinnati is one of the largest and most competitive swim meets in the country, with eight regional preliminaries and two days and nights of races. This year approximately 120 schools and over 3050 swimmers competed and again, the small swim team of Yellow Springs High School made a big splash.

Coming off a record-breaking swim last week, Elizabeth Malone added on to her YSHS career accomplishments by winning the title in the 100-yard butterfly. Her 58.08 second swim in the finals was good for first place for the senior who holds four individual records at the school. Malone went on to take third place in the finals of the 200-yard butterfly with a time of 2:07.95.

First year swimmer Emma Romohr notched two lifetime bests on the day. She finished in 37.03 in the 50-yard freestyle and 1:54.24 in the 100-yard backstroke. And lone male swimmer Connor Gravley swam the 200-yard breaststroke in 3:13.52.

The McKinney boys basketball team knows domination. Last year, as seventh graders, they finished the season undefeated in the conference and 10–2 overall. This year, they’ve remained undefeated at 6–0 with two more conference victories over the week. Their overall record is 7–1.

At Xenia Christian, the team won 56–28 on a night where three Bulldogs scored in double digits. Rodman Allen led with 17 points, Kaner Butler had 15 and Isaiah Taylor finished with 10. Taran Pergram added seven on the night, Devon Perry had six and Ethan DeWine contributed a basket.

In a 70–41 defeat over Troy Christian, every Bulldog scored. Allen, Pergram and Taylor all had 13 points, Butler and Perry had nine, Keenan Curley and DeWine each added four, Oluka Okia had two points and Aaron Sherwood scored one.

Be sure to visit ysnews.com every Sunday during the fall, winter and spring sports season for the latest YSHS and McKinney School sports news and weekly photo galleries from select games. Next Sunday’s edition will feature photos from the YSHS boys varsity game vs. Jefferson.