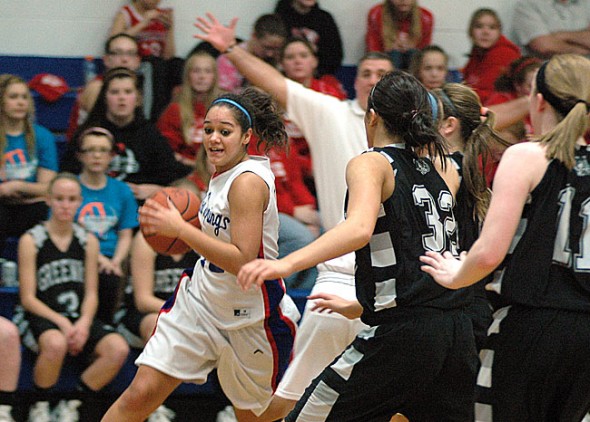 Maryah Martin drove around a Greenon defender for an easy layup in the team’s 47–22 loss to the Division II team. Earlier in the week Martin, the Bulldogs’ leading scorer, shot for 24 points against Middletown High School. (Photo by Megan Bachman)

The boys varsity basketball team snapped a six-game losing streak by pulling out an all-important conference victory against Xenia Christian this week. The Bulldogs flew out of the gates to take the early lead and won 74–40 with double-digit scoring performances from four players. They improved to 2–4 in the MBC.

Greg Felder Jr. scored a game-high 17 and Cole Edwards and Roland Newsome added 14. Jared Scarfpin gave Bulldog fans a glimpse into the future dropping in 10 points. Felder grabbed 11 rebounds and dished out five assists. Robbie Jones (8 points) and Jake Fugate (2 points) each contributed three assists. Antone Truss (4 points ) grabbed six rebounds of his own and Austin Pence (2 points) played some defense with two steals and three rebounds. Late in the contest, junior Murphy Davidson played tough defense and dished out two of his own assists while YSHS freshmen Ian Chick and Liam Weigand made the most of their varsity time. Chick grabbed three rebounds and Weigand got the fans excited with a long range three-point shot that hit nothing but net.

In the second year of the Dayton–Cincinnati Showcase, designed to match up small schools from both areas, the Bulldogs took on Purcell Marion from Cincinnati and didn’t back down. The YSHS offense and defense controlled the first half and the Bulldogs led 28–20 at half time. But a 24–8 third quarter run by the Cavaliers gave them a 44–36 lead going into the fourth quarter. The Bulldogs came back with a 24-point quarter of their own in the fourth, but came up short, 62–60.

“We are still learning how to make winning plays at the right time,” said Coach Brad Newsome of the loss.

A four-game win streak came to an end this week for the Division III Yellow Springs High School girls basketball team as they fell to two Division II teams. Though now 5–8 overall, the team is still riding two straight victories in the Metro Buckeye Conference, where they currently hold third place with a 3–3 record.

At Middletown High School, they lost 68–47. Team point leader Maryah Martin scored 24 on the night, going six for 18 from the field with three free throws and three three-pointers. Martin is averaging 10.4 points per game for the Bulldogs. Despite her stellar play, the Bulldogs fell behind 16–6 in the first quarter and couldn’t bridge the gap.

Martin also had seven rebounds during the game while Brianna Ayers contributed three steals and went 4 of 6 from the stripe and Keturah Fulton had seven points and two steals.

In a matchup with nearby Greenon, the Bulldogs struggled to put points on the board and shift the momentum from the visitors, who packed YSHS with their fans. They lost 47–22. Martin scored seven points, Paloma Wiggins had five points and Kennedy Harshaw had four points and seven rebounds.

The Kenton Ridge invite was the most recent stage for the talented YSHS swimmers. Medals were won and lifetime bests achieved at the annual meet held at Wittenberg University.

The district-qualifying girls-relay team is also getting faster. Chick, McKinley, Malone and Meyer swam the 200-freestyle relay in their best time this year — 2:04.96 — three seconds ahead of their district performance last year.

In five losses in recent weeks, the McKinney girls basketball team twice lost by less than a field goal. Against Middletown Christian, the seventh and eighth graders lost a nail biter, 32–31, on a team effort. Elizabeth Smith led with 21 points, Julie Roberts had four points and Anna Williamson, Kaliyah Fulton and Jade Miller each contributed two. After the loss, the seventh-grade team went on to battle Troy Christian in double overtime, eventually falling 23–21.

“I was very proud of them this game,” said Coach Evin Wimberley. “It was just disappointing that we ended up on the losing side.”

In that matchup Smith had 19 of the final points and Fulton added two points. Later that night, the eighth-grade team went on to lose 46–6 to Troy Christian. Smith had four points and Danny Horton added two. The Bulldogs also fell to Indian Valley 30–25 in a game that came down to the end. Smith had all 25 of the team’s points.

Though nearby Greenon is a Division II team, Coach Craig McCann thought his McKinney eighth-grade boys basketball team could take them. The Bulldogs lost 40–38 in the non-conference matchup. Kaner Butler had 14 points, Rodman Allen and Isaiah Taylor each added nine and Devon Perry contributed six.

The Bulldogs beat Emmanuel Christian on the road 51–35 to remain undefeated at 8–0 in the conference (9–2 overall). The Bulldogs were hot from behind the arc, netting six three-pointers, and passed well, according to Coach Craig McCann.

“We moved the ball very well, passing the ball inside and back out to open shooters,” McCann said. “It was probably our most complete game.”

Butler led the team with 18 points and Taylor and Perry had 10. Rounding out the scoring were Allen (6 points), J.T. Clark (5 points) and Ethan DeWine (2 points).

Down by 15 points to Emmanuel Christian with four minutes to go in the fourth quarter, the McKinney seventh-grade boys basketball team didn’t give up. They charged back and went up by three with one minute remaining on a corner three-point shot from Akeen Truss. They won 44–41.

“I’m really proud of our guys today,” said seventh-grade Coach Brad Benning. “I feel we get better with each game we play.”

Center Joe Plumar led the comeback and ended with 21 points and a commanding 23 rebounds. Hayden Orme had 10 points and three steals and Truss ended with six points and five rebounds.