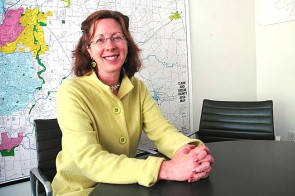 The Village of Yellow Springs entered 2012 in deep transition, as several key leaders were on their way out. Village Manager Mark Cundiff had announced in December 2011 that he’d leave in February 2012 for a new job in Sidney, and longtime Police Chief John Grote planned to retire in the spring.

But it only took a month for Council to appoint Laura Curliss of Wilmington as interim manager. An attorney, Curliss began her interim duties in mid-January, allowing a month of overlap with Cundiff. Curliss had served Wilmington for six years as executive assistant to the mayor.

Curliss was hired as permanent Village manager in June.

Grote was given a fond farewell at a crowded luncheon in his honor in April. Also honored were retiring longtime water plant operator Ted Dunevant and streets crew member Greg Jones. 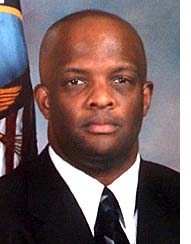 After a several months search, Anthony Pettiford, who grew up in Yellow Springs, was hired as the Village’s new police chief.

In March, the Women’s Voices Out Loud art exhibit, showcased in the Bryan Center, sparked a controversy around the use of public space for the arts. When several Village employees complained about nudes in the exhibit, some artists brought in more nudes. While no paintings were removed from the exhibit, the incident prompted Council to begin discussion on a public arts policy.

That discussion continued throughout the year, with some local artists urging Council against formulating a policy, which they viewed as censorship. However, by the end of the year Council was poised to adopt a new policy drafted by Curliss, which both local artists and Council supported.

An ambitious project to construct 34 affordable apartments for seniors on the Barr property downtown sputtered to a halt after it failed to receive federal funding.

Begun as a collaboration between Home, Inc. and the Buckeye Community Hope Foundation in 2011, the project was dependent on winning about $4 million in federal tax credits for funding. While the project had many supporters, especially among local seniors, it also had critics who objected to its proposed large blocky design at the edge of downtown.

In April, the project failed to win the tax credits, and the Buckeye Foundation’s opton on the Barr property expired in September. Shortly after, Jim and Libby Hammond purchased the property, stating that while their plans weren’t yet firm, they hoped to use the property for the good of the community.

It began innocuously enough in March, with a plan to move ahead with the longtime goal of fixing village sidewalks. To kick off the project, sidewalks on the east side of Xenia Avenue between downtown and the Friends Care Community were the first to be repaired.

In June, Curliss announced that she would initiate a more ambitious project downtown in conjunction with the sidewalk repairs. Along with fixing the walks, Curliss planned to replace streetlights, restripe parking spaces and remove the aging Bradford pear trees downtown. The plan also called for a new “bump-out” in front of the Emporium to increase public space.

However, when villagers got wind of the plan, they began filling up Council meetings with their concerns. The plan to replace downtown trees had the most critics, although some pointed out that the trees were 30 years old and becoming dangerous, as well as buckling some sidewalks. Still, villagers wrote letters to the editor, showed up for Council meetings, and some took part in regular protests downtown aimed at saving the trees.

After several months of controversy, Council in August voted to proceed with a downsized streetscape project.

No texting while driving

In April, Council banned texting while driving in the village. The issue was brought to Council by villager Jaye Drummond, whose young daughter was killed in a car accident in 2011 caused by a texting driver.

In April a Greene County Common Pleas Court magistrate ruled in favor of the Struewing family in its lawsuit against the Village.

The suit stated that land owned by the Struewings, located just outside Village limits, should have access to Village water due to a long ago agreement between former Village Manager Howard Kahoe and the Village that provided that access in exchange for running Village pipes through the property. However, the Village stood by its policy that Village utilities should not be provided to property outside Village boundaries, and said the Kahoe arrangement had been fraudulent.

After the April ruling, Village Solicitor John Chambers and Council stated that objections to the ruling would be filed.At the time, the Village had spent about $73,000 on the lawsuit, Curliss said.

By year’s end, the case was still in the court system.

Safer routes in the village

First in state to ban wells

This fall Village Council passed a resolution banning the drilling of injection wells in Yellow Springs, at the urging of the Gas and Oil Drilling and Awareness and Education, or GODAE, group of citizen environmental activists. The ban made Yellow Springs the first municipality in the state to take such a stand.

Villager Don Cipollini of Wright State University, an expert on the Emerald Ash Borer crisis, urged Village government to select some of its ash trees on public land to save and to cut down others, since the insects have arrived in the village and will within a few years destroy all ash trees. By the end of the year, some of the ash trees had been cut down.

A long-planned revision of the Village’s zoning code that will replace an outdated code was introduced to the public this fall, after the Technical Review Committee, a group of citizens and officials, spent almost a year on the revisions with consultant Paul LeBlanc. The revised code aims to enhance flexibility and creativity in housing and economic development in the village. At year’s end, Planning Commission was poised to incorporate concerns into the revised code, after which it would go back to Council for approval in February 2013.

Council President Judith Hempfling announced in the fall that she would leave Council within a few months, although her term will not end until 2013. Hempfling, who said she would stay through the zoning code update, cited family demands as the reason for leaving. Council sought applications from those interested in the open Council seat.

The Village general fund budget for 2013 has a larger than usual cushion of over $2 million left over from 2012 out of a total budget of $3.1 million, Manager Cundiff stated during budget talks in the fall. However, projections showed that the surplus will diminish considerably over the next few years without funding changes.