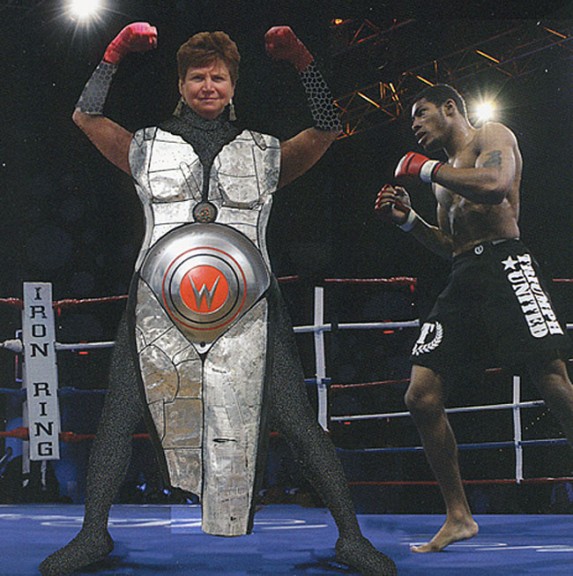 New York City artist Linda Stein will speak on gender fluidity and new female heroes at 8 p.m. on Wednesday, Feb. 22, at McGregor Room 113 on the Antioch College campus. Stein’s sculptures, which include torsos that question the notions of male and female stereotypes, are on display at Sinclair College this month. (submitted photocollage)

When Linda Stein was a girl growing up in the Bronx, her mother and older sister made sure she knew the rules: men always had to win, to be (or at least see themselves as) better than women. So they taught her how to hit into the net when she played tennis, to throw the bowling ball into the alley rather than make a strike.

Perhaps not surprisingly, Stein has spent much of her adult life as an artist and activist challenging gender stereotypes.

A sculptor and performance artist, Stein comes to Antioch College on Wednesday, Feb. 22, at 8 p.m.to speak on “Salander/Blomkvist: Challenging stereotypes in The Girl with the Dragon Tattoo — and beyond.” The talk will take place in McGregor Hall Room 113 on the college campus.

Stein’s art and activism “have been passionately engaged toward tearing down all forms of gender stereotypes and prejudices as she increasingly focuses on celebrating the fluidity of gender,” according to a college press release. She’s found the gender-bending in the recent best-selling Stieg Larsson novels, and the Swedish (but not American) film version of the book to be provocative and inspiring, she said in a phone interview last week.

“It’s very exciting that the director and author went out of their way to see the male and female characters express fluidity of gender,” she said. “Lisbeth is very much a symbol of protection and female empowerment.”

Her talk, which includes 17 minutes from the Swedish film, will also include Stein’s reflections on other gender-bending female media role models, including Lady Gaga and Wonder Woman, who she sees as “icons of assertiveness.”

While Stein’s art will not be at Antioch at this time, her exhibit, “The Fluidity of Gender,” is on display at the Burnell R. Roberts Triangle Gallery at Sinclair Community College in Dayton until March 7. The exhibit, which includes 13 sculptures of leather-clad figures that she hopes provoke discussions on what it means to be male or female, will travel to more than 19 museums and universities around the country through 2013.

While Stein has considered herself a feminist for decades, it’s taken a while for her to focus her art work on gender issues, she said in an interview in The Progressive magazine. She ran a successful calligraphy business in New York City, making art on the side, but had her world upended by 9/11, which forced Stein and her co-workers to flee her downtown studio. When after several months she began to make art again, Stein found that her art had changed: once purely abstract, she now was drawn to figurative sculptures. Her first post-9/11 group of sculpures were torsos of female knights, using fiber, leather, metal, bone, rope, paper, stone and wood.

“I realized that I wanted to create women who were symbols of strength and protection,” she said in the Progressive interview, stating her interest in constructng a new kind of female hero, one combining the attributes of the Buddhist goddess of kindness, Kwan Yin, with the physical strength and daring of Wonder Woman.

And after creating the female knights, Stein began making wearable sculpture in the form of armor.

“I’m interested in the transformation that occurs when someone puts a piece of sculpture on,” she said in the Progressive interview. “It began with me fortifying myself after 9/11, but I later wanted to give others the experience.”

Women who have worn her armor — sometimes called body swapping — have reported such changes as being more able to say no to a boyfriend, or feeling safer walking at night, Stein said.

In recent years, Stein began making torsos with more ambiguous gender associations, with the hope of sparking thought and conversation regarding what it means to be male or female.

She wants especially to provoke the thinking of young women and men.

“Gender is a very hot topic on campuses today,” she said last week. “As students feel freer to try on different identities, society still pushes back very hard. And students have conflict as well — they’re open to diversity but also aware that there’s so much bullying going on on campuses.” Young women who dare to take on male behavior or appearance have been targeted by cyberbullies, she said.

Things have changed since feminism’s second wave swept the country in the early 1970s, and in many ways women’s lives are better, such as their having more protection against sexual harassment at work, and making strides toward earning equal pay for equal work. But there is still much to do, Stein believes.

“So much has changed,” Stein said. “But not nearly enough.”