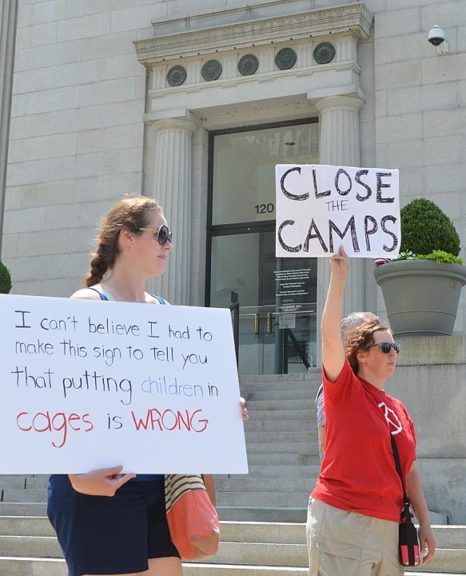 Dorothee Buron, of Yellow Springs, foreground, was one of about a half dozen villagers, along with about 60 others, who gathered near the office of Congressman Mike Turner (R-Dayton), on Tuesday, July 2, to protest the inhumane treatment of immigrants. (Photo by Megan Bachman)

No cages, no walls

Around 60 protesters gathered near the office of Congressman Mike Turner (R-Dayton), on Tuesday, July 2, as part of a nationwide protest at 184 locations to demand action on unsanitary conditions at immigrant detention centers and the inhumane treatment of immigrants, including children. Dorothee Buron, of Yellow Springs, foreground, was one of about a half dozen villagers who attended. “I have trouble sleeping at night, so I had to do something about it,” Buron said of the situation at the border. Buron added she was especially affected by photos of a father and his 23-month old daughter who had died crossing the Rio Grande into the U.S. from Mexico after not being able to apply for asylum — she has a child exactly the same age. Later, a small group delivered a letter, signed by 52 protesters, to a Turner staffer that called on the congressman to close the camps, to halt funding for family detention and deportation and to visit a detention center during the 4th of July recess to bear witness to the situation.