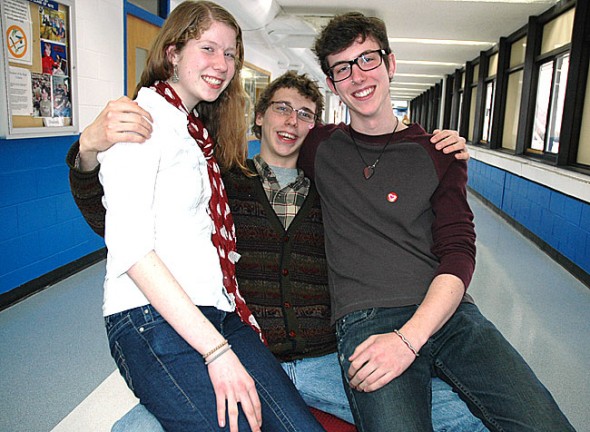 The Yellow Springs High School One-Acts, featuring student-written and student-directed plays, will be held at 8 p.m. on Friday, Feb. 17, at the Mills Lawn auditorium. This year’s playwrights of original one-acts are, from left, Lois Miller, Colton Pitstick and Rory Papania. This year, the plays will be supplemented with a variety show. (Photo by Megan Bachman)

Show goes on for One-Acts

It’s a Friday night in Yellow Springs and a group of high school kids are looking for things to do. Should they make scented candles? Form a massage train? Egg a house? The typical, albeit caricatured, teenage banter is captured in a one-act play written by YSHS students Rory Papania and Lois Miller and will be performed at this year’s annual staging of student-written, student-directed pieces.

A YSHS tradition in its 21st year, the one-acts were initially canceled last month when only two plays were submitted by the script deadline. The Theatre Arts Association board decided to move forward anyway by supplementing the three student-directed plays with a variety show and holding it for one night only. After all, the show must go on.

“I do think it’s an opportunity for the students to say what matters to them and to have their voice heard,” said Ara Beal, this year’s one-acts coordinator. “I always want to hear what the kids think is important, what’s in their lives and their reaction to the world.”

In addition to the one-acts, there will be an array of talents on display — from harmonica to belly dance, a staging of a Sherlock Holmes radio play, a parody of a Republican presidential primary debate, and a dance number from the spring musical Grease.

It may be like an “amateur hour,” in the words of Theatre Arts Association board chair Moira Laughlin, but attendees can expect the same inspired, funny and insightful student creations that have come to be associated with the one-acts.

Beal, a professional dramaturge who works on new play development, has been impressed with the student work this year.

“There’s a saying that you can’t be a playwright until you’re 30,” said Beal, who grew up in Yellow Springs. “I find that these students do not necessarily support that. They’re writing about their lives and the things they understand. They can articulate very well and very cleverly the world that they do know.”

Papania, a senior, said he is disappointed that more students didn’t write plays, but is thrilled that he’ll have a final opportunity to participate in a uniquely collaborative and improvisational theatrical production. He has especially enjoyed working with students without prior theater experience. It is Miller’s first time writing and directing a play.

“I was depressed when they canceled them originally, that this tradition was going away and that our class let the school down,” Papania said, adding that he hopes the tradition continues.

In his senior year, Colton Pitstick said this year’s one-acts are somewhat of an “anti-climax” but at the same time he is excited to take on the new role of master of ceremonies for the variety show. Pitstick will direct two plays he wrote — a dialogue between two Nazis and a murder mystery about the killing of the Easter Bunny in which Santa Claus and the Sandman are suspects.

“It’s a creative opportunity that’s extremely student-oriented,” Pitstick said of the one-acts. “It really gives us a chance to bond with our peers and it is something that is wholly ours.”

The low interest might be attributed to an earlier script deadline, put in place so there could be more feedback on student material, Papania said. Often, one-acts are thrown together in the final week, with little rehearsal time.

“We’ve been trying to put more structure in because the students themselves have a little more tolerance for last-minute things,” said Laughlin, also the drama club advisor. The idea was that with Beal’s professional guidance, students could have made rewrites and honed their material over several weeks.

Even though the one-acts didn’t turn out as many expected, Beal said she looks forward to the new incarnation.

“I like the idea of demonstrating that performance and theater doesn’t have to come from a script,” Beal said. “There are other ways to get to performance collaboratively.”

The Sherlock Holmes play was written by Kay Reimers and will be read by ­McKinney School students. The Republican debate will be largely improvised, with Papania playing Romney and Pitstick impersonating Ron Paul. Students will bring a number of talents to the variety show, including juggling, poetry, song and dance, flipping offstage and playing guitar with a bear, according to the sign up sheet at the high school. And the Grease number, “Shakin at the High School Hop,” will be a preview of this year’s lively musical. Grease runs from April 13–15 and from April 20–22.

The one-acts are the most important fundraiser of the year for the drama club, which funds its own fall play director and one-acts coordinator for $2,000 each school year, according to Theatre Arts Association board member Jerome Borchers.

“We really hope people can come out because it does make a difference in our ability to continue to deliver with musicals in the spring,” Borchers said.

The one-acts often play to a packed house and push the envelope. They continue to carry a disclaimer warning of offensive material, put in place after a student play was censored in 2008. Though the format has changed, the spirit is largely the same.

“I’m considering [the one-acts] to be a celebration of our high school students through performance,” Beal said. “We’re just taking a slightly different path.”

Disclaimer: There is the possibility that plays in the one-acts might contain language or content not suitable for young children. Parental discretion is advised.