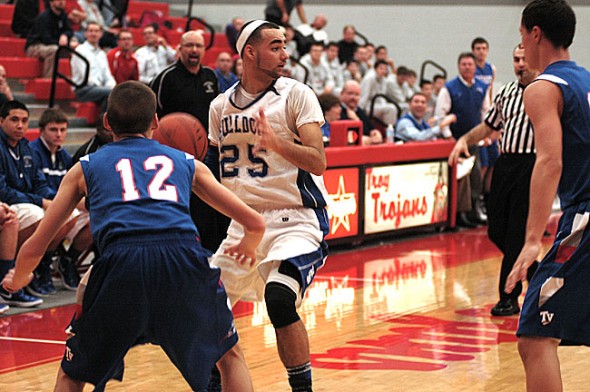 When the Yellow Springs High School boys basketball team went into the locker room at halftime up 22–18 against #2 seed Tri-Village in the sectional semi-finals, it seemed an upset was in the offing. The Bulldogs had pounded the Patriots all half, outscoring, out-rebounding and out-hustling their opponents. And they held Tri-Village to the fewest points the Patriots had scored all season.

But the YSHS swagger faded in the third, as Tri-Village used its height to dominate on the inside and halted the fast-paced Bulldog offense. Yellow Springs’ lead dwindled. They were down by just four points with five minutes remaining, but were outscored 20–9 in the final frame. YSHS lost 60–40 and ended their season 6–15.

“I was very proud of the kids,” said Coach Brad Newsome after the game. “Everyone was disappointed that we lost but everyone knew that we gave it our best. It wasn’t unbearable. We gave them a really good game.”

Departing senior guard Greg Felder Jr. went out on a high note. He led the Bulldogs’ scoring with 11 points, including six from behind the arc. Felder Jr. was poised at the paint, helped the Bulldogs run the court in the first half and on defense delivered massive blocks.

Robbie Jones and Roland Newsome each had nine points. During a 12–6 Bulldog run in the first, Newsome had a four-point play that kept the momentum going for YSHS. Cole Edwards added six for his team, Jared Scarfpin scored three and Murphy Davidson contributed two.

At the close of the season, Felder Jr. was selected to the district-15 all-star game, the Metro Buckeye Conference first team and received an honorable mention in the southwest all-district nominations. He ended the season second in the MBC in blocks with 1.7 per game.

Newsome led the MBC in points per game, at 17.6, and in rebounds per game, with 10.1. He made the conference first team, district-15 underclassman and southwest all-district second team.