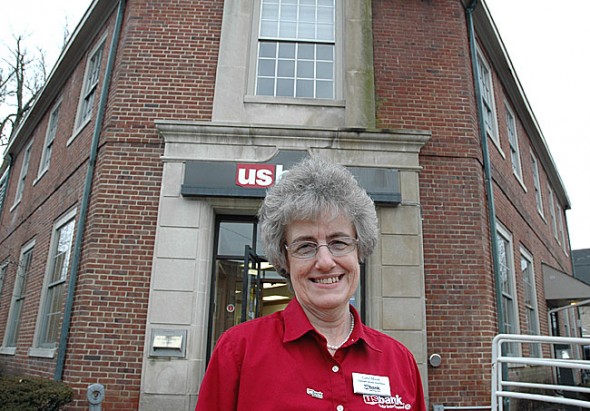 Carol Moore retires this week after 45 years at US Bank and its predecessor, Miami Deposit Bank, where she worked as a bookkeeper and bank teller. A celebration of Moore’s retirement is open to the community and will be held from 6 to 8 p.m. on Monday, Feb. 27, at Young’s Jersey Inn. (Photo by Megan Bachman)

Next window, please— Moore retires from US Bank

When 19-year old Carol Moore was hired as a bookkeeper at the Miami Deposit Bank in 1966, she promised to stay for three months. As the months became years, the names on the account ledgers became real people and genuine relationships. Moore became a fixture at the bank, a familiar face to her customers and a wealth of institutional knowledge. Having seen four bank name changes and 45 years of service, the 64-year-old Moore is finally retiring from her long-held position of bank teller at the local branch.

“She has a sixth sense about knowing her customers — ‘customer first’ was her mentality,” said Perry Stewart, a former Miami Deposit president and the one who hired Moore in 1966. Moore will be missed, he added, and in anticipation of Moore’s departure, three new employees have been hired at the bank.

“Carol knows everything,” said bank manager Karen Kerns, who is losing her longest-serving employee. “If you asked her where something is, she knows it. And she knows who’s who in the community.”

Moore will be honored at a celebration of her retirement on Monday, Feb. 27, from 6 to 8 p.m. at Young’s Golden Jersey Inn. Community members are invited to attend and light refreshments will be served.

For her part, Moore said she enjoyed the work and especially liked her co-workers, the Yellow Springs community and staying abreast of her customers’ lives. Though she would sometimes have to grit her teeth when an ornery account holder came in, her philosophy — the customer is always right — paid off. She was thanked by customers often.

“They say ‘thanks’ and ‘I’m glad you’re still here, because you’re the only one I know,’” Moore said this week.

Moore said banking is a service and that she always looked out for her customers’ best interest, eyeing potential mistakes on their deposit ticket and being sure the totals came out right.

“They’re your finances — you’re concerned about them all the time,” she said.

Moore grew up on a dairy farm on Cedarville-Yellow Springs Road and learned bookkeeping at Cedarville High School from her mother, who was the school’s commercial teacher. As a Miami Deposit bank bookkeeper she worked upstairs in the building before becoming one of the bank’s three tellers at the time. Within a few years, she saved up enough money to buy her first car — a blue 1969 Chevy Malibu — which she used to drive her three-mile daily commute. Later, she “got a good deal” on a home loan from the bank and bought a house on Clifton Road outside the village with her husband, Eddie, a Yellow Springs Post Office rural route carrier for more than 30 years. There, they raised their three children.

Even with Moore’s steady presence, the Yellow Springs community, the local bank, and banking itself changed dramatically over the last 45 years.

During Moore’s tenure, the bank changed ownership and was known through the years as Miami Deposit, Star, Firstar and now US Bank. Originally founded in 1905 by Stewart’s grandfather, Miami Deposit remained independent until the early 1980s, when First National Cincinnati Corporation bought it. In fact, Miami Deposit was the first outside bank that merged with First National Bank of Cincinnati in the newly-formed corporation, according to Stewart. That corporation later went through several name changes and expanded to become the nation’s fifth largest commercial bank, with $330 billion in assets across 27 states, including $42.5 million in loans and deposits at the Yellow Springs branch, according to US Bank spokeswoman Lisa Clark last year.

Though it’s now a big bank, it still has “a small town heart,” said Kerns, the manager. Moore has helped keep it that way, Stewart added.

“What Carol brought to [the bank] was the same customer service that people were used to when it was a small bank,” Stewart said.

Miami Deposit moved in 1941 from what is now Ohio Silver into its present location in a building it erected at the corner of Short Street and Xenia Avenue, a place Moore has spent some 90,000 hours over her 45 years. With windows overlooking downtown, Moore said she has seen a large rise in traffic on U.S. 68 and many businesses come and go. Her favorite was a bakery just across the street where she would pick up doughnuts on her breaks. For Moore, Yellow Springs, has been “a unique community” in which there was “never a dull moment,” she said.

When Moore started, accounts were balanced by hand, check endorsements were scrutinized, banks were overflowing with paper documents and the clanking of typewriters was incessant. Then routing numbers eliminated the need to verify checks and computers increased efficiency and digitized records. With online banking, fewer customers would do their business in person at the bank. Moore worked as the drive-through window teller for 22 years before that position was phased out last year. Instead a tube at the drive-through now shuttles customers’ deposits and withdrawal slips directly to tellers in the lobby.

The only robbery at the bank during Moore’s time was in 2009, when a Springfield man handed a teller a note demanding money, fled with a small amount of cash and was later arrested. At the time Moore was working the drive-through and was unaware of the robbery. The only other time the bank was robbed was in 1959, when the perpetrator fled into the area’s cornfields with $5,000 in cash. He also was caught.

Handling cash was never a problem for Moore, who began thinking of it just as “green paper,” instead of what it was worth, she said. Moore kept quiet about her knowledge of people’s bank balances, but secretly knew who was wealthy in town. She took up a hobby in gardening because “flowers don’t talk,” and because it felt good to get her hands in the dirt after using them all day for typing and totaling, Moore said. And though she began to develop hip trouble, she was fine staying on her feet all day, though good shoes were a necessity on the job.

Stewart, now 79, said he is proud to have hired Moore. She always came in on time, was a “self-starter,” and was low-maintenance. She would know what needed to be done, and then go do it. But most importantly, Moore was close with her customers. Her retirement, he said, will be a loss for them, and for the bank.

One Response to “Next window, please— Moore retires from US Bank”