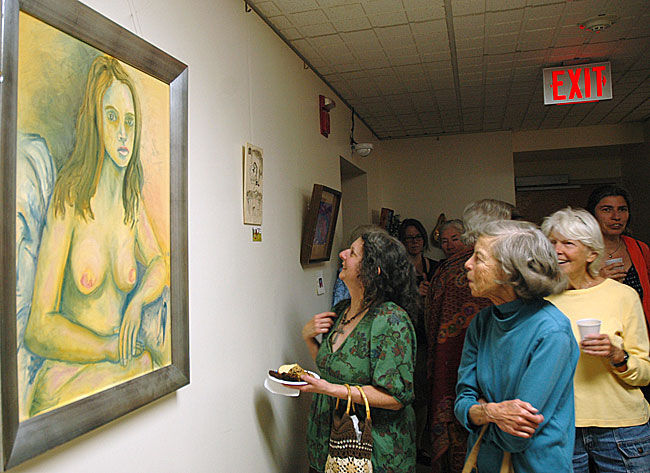 Attendees at the “Women’s Voices Out Loud,” performance took in the controversial art exhibit in the John Bryan Community Gallery at intermission. In the foreground is local artist Deb Housh’s painting, “More Nudes Please.” After several Village employees who work in the John Bryan Community Center complained about nudity and sexual content in artwork at the annual exhibit, Council decided to develop a local public art policy.

Village Council will push to create a local policy for public art because of complaints from several Village employees about nudity and sexual content in artwork at the annual “Women’s Voices Out Loud” exhibit now on display at John Bryan Community Center.

The employees, who work in the building, at 100 Dayton Street, routinely walk by the display on the second floor hallway of the center, known as the John Bryan Community Gallery.

Council President Judith Hempfling said this week that because of the employee complaints, she plans to work with Village Council to develop a public art policy, since no formal policy currently exists. After the “Women’s Voices Out Loud” exhibit is over, no future art show will be allowed in the space until a public art policy is developed, Council unanimously agreed at its March 19 meeting.

The artwork deemed offensive included a female nude line drawing by Sherraid Scott, an abstract representation of male and female sex organs by Nancy Mellon and a mannequin called “Hairy Mary” by Mellon and Corrine Bayraktaroglu, aka the Jafa Girls, with decorative fabric covering its private areas, according to Bayraktaroglu. About half of the pieces on display contain nudity.

Village Solicitor John Chambers, who was instructed to look into the legal issues by Interim Village Manager Laura Curliss, said the situation is “very complicated” because the Village needs to honor the artists’ First Amendment right to free speech and also to protect its employees from a hostile work environment.

“Employees of the village have to walk the hallway as part of their job and if they feel it is a problem from their perspective, then the Village has an obligation to examine it,” Chambers said.

Any official complaints about the exhibit lodged by Village employees would be private information, Chambers said. Curliss declined to comment on the matter, and also instructed Village staff members not to speak to the press.

The exhibit opened at the beginning of March, but local artists have since added more artwork with many new pieces containing nudity. As of this week 19 of the show’s 42 pieces depict a nude or partially-nude body. The show runs through March 31.

Artists defended the exhibit by arguing that the artwork was appropriate for the show, that nudes have traditionally been part of exhibits at the gallery and that the pieces in question are not sexually explicit.

“Nothing was put up there to try to harass anyone or to make a statement of ‘in your face,’” said Mellon, whose piece “After Dinner Party” depicted abstract penises and clitorises to shed light on an often-ignored part of the female anatomy. She said she was motivated to submit the painting because of the current “backlash on women’s rights to healthcare.”

“It’s very lighthearted and whimsical,” Mellon said of her piece. “It’s not sexual in any way.”

Deb Housh, an artist, art historian and art educator, said that the nude images in the show are empowering to women and that nudes are common in art throughout its history.

“There is a long history and legacy of presenting the human figure — the body — in art,” said Housh, who added a nude painting to the exhibit and titled it, “More Nudes Please.”

“Revering that during women’s history month and in a women’s art show is appropriate,” she added.

Bayraktaroglu said the controversial pieces were meant to celebrate women, not be sexually provocative. Laurie Dreamspinner, a host of “Women’s Voices Out Loud,” echoed the sentiment. She said that while she believes everyone should feel safe in their environment and respected, the response to the exhibit was “violating to the artist” and a symptom of a “toxic culture.”

Sharon Mohler, who curated the “Womens Voices Out Loud Show” in the late 1990s, said that the exhibit, which has typically included nudes, is “a show by women about women for women.”

“Where we see goddesses, they see pornography,” Mohler said. Mohler curated the show in 1999, during which a nude oil painting by local artist Julie Karlson was vandalized. Someone taped a “paper bikini” over the female figure’s private areas, prompting Karlson to remove her work from the exhibit to avoid any damage, Mohler said.

Artists also expressed their concern about a public art policy that might disrupt their creative expression. Housh said that while she is not opposed to a policy, she worries that a “highly-restrictive policy that amounted to censorship,” would not embody the values of the community.

“I imagine Yellow Springs without the work of the Jafa Girls, the murals in Kieth’s alley, decorative benches, the art park outside 100 Corry Street and it quickly becomes a place I’m a lot less interested in,” Housh said.

Jerome Borchers, board president of the Arts Council, which has been working on a public art policy for several years, said he hopes the policy leads to more local public art.

“We don’t want a policy that discourages spontaneous, creative art,” Borchers said. “Any policy is going to really have to negotiate spontaneity versus the bureaucracy of permission.”

The Arts Council drafted a public art plan in 2009 that included site considerations, the need to inform affected parties and public art maintenance. Cooperation with the Village on public art is vital to the group, Brochers said. Last month, the Village supported an Arts Council grant to the National Endowment for the Arts for public art symposia.

Hempfling said a public art policy should consider that the John Bryan Community Gallery is in a building used by many diverse groups of people. The John Bryan Community Center has a Youth Center for local children, a dance studio, gymnasium and meeting rooms for local groups. It also houses the police station and offices for the utility department, Village administration, planning and permitting, economic development, the Mayor’s Court and Clerk of Council.

Council member Lori Askeland agreed that a public art policy is needed because the art gallery is in a workplace and employees don’t have the option to avoid artwork they are uncomfortable with.
Mellon defended the John Bryan Community Gallery as an appropriate venue for art shows.

“It is a building that is meant to show the heart of Yellow Springs and I don’t think the heart is into censoring,” Mellon said. “It says something about Yellow Springs that [the exhibit] is in our community center not just in private art spaces.”

The “Women’s Voices Out Loud” exhibit isn’t the only show to have sparked public art controversies in recent years. In 2009, a local resident complained about a banner on display as part of the Yellow Springs Banner Festival downtown. The resident contended that the banner, which showed President Barack Obama in a Superman costume, was offensive because it made a political endorsement.

Last month a painting in the John Bryan Community Gallery was moved by a Village employee who found the content disturbing, according to Bayraktaroglu, a co-curator of the Arts Council’s permanent collection, which hung there in February.

The painting, by local artist Steven Rumbaugh, showed the Statue of Liberty shooting itself through the head with a gun labeled, “N.R.A.”

“It was just a comment on gun violence in this country and how it’s completely out of hand,” said Rumbaugh of his work. He added that the painting, originally done in the early 1990s, is even more relevant today and that it’s important that it hang in a public space.

Fellow co-curator Mellon did not move the painting back to its previous position in order to be considerate of the employee’s feelings and sent a letter to Village employees asking that they contact her if they had any concerns over artwork, she said. That way artwork would not be damaged if moved, she wrote.

Borchers said that the John Bryan Community Gallery was designated by Village Council as an art gallery and that similar pieces have been shown throughout the years without issue.

“Why suddenly is this now a point of contention where some artists had to feel like what they had to produce wasn’t for public view when for decades it has been?” Borchers asked. 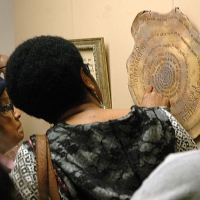 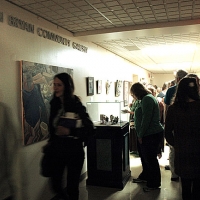 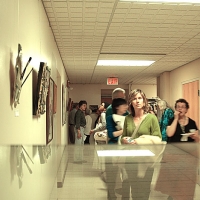