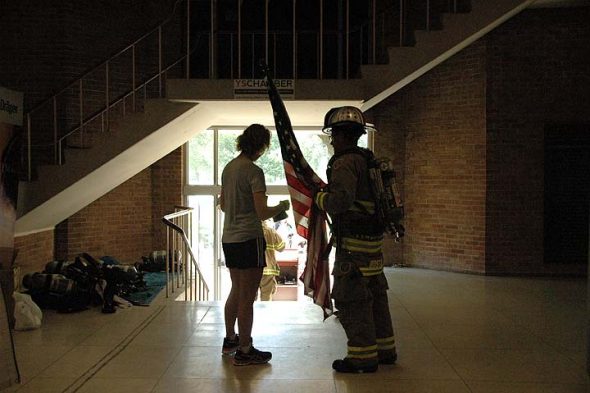 126 people — including 40 firefighters in 65 full pounds of gear — took part in this year’s 9/11 Stair Climb. The annual fundraiser, now in its third year, benefits the survivors and families of the first responders to the World Trade Center attacks. Climbers’ combined efforts raised approximately $23,000, exceeding last year by $5,500.

Firefighters, police, paramedics and many others came from around the region, one from as far away as Phoenix, Ariz. The climbers collected pledges and then climbed 110 flights of stairs in Antioch College’s Main Building, after the 110 stories in each of the twin towers. After completion, climbers would exit the building, read one or more names of fallen first responders and ring a traditional firehouse bell for each name.