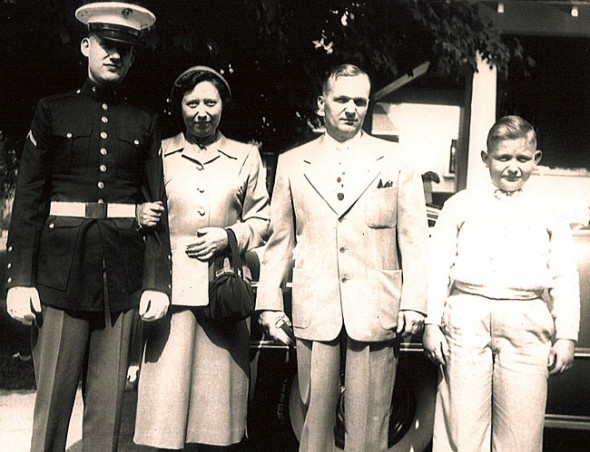 Herbert Pencil, the oldest male resident at Friends Care Community, is shown with his family, his wife, Ida, and the couple’s two sons, all of whom predeceased him. (Submitted photo)

Life of a century, and some change

Herbert Pencil, Friends Care Center’s oldest male resident, was born in North Hampton, Ohio, on Sept. 25, 1909. On that day, America had 46 states, and William Howard Taft was the country’s 27th president. It was a year of historic events: Robert Perry reached the North Pole; Henry Ford produced the first Model T; the Wright Brothers sold the Army its first combat aircraft; and in Belfast, the Harland and Wolff company began construction of the R.M.S. Titanic. Over the next 100 years, Pencil would live through six major wars, the Great Depression and 18 U.S. presidents.

Pencil, who grew up on a farm with 11 brothers and sisters, has experienced much of what the world has to offer during his 102 years.

“I’ve lived a good, long life,” Pencil said on a recent afternoon. “I was married to the same woman, Ida, for 80 years, and we raised two wonderful sons — Harold and Larry.” 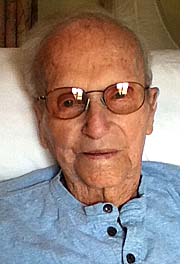 Although Pencil is grateful for his longevity, one of the downsides has been outliving both his sons and his wife. (Ida, who was two years older than Pencil when they married back in 1929, died two years ago at the age of 102. In addition to raising two children, she was employed as a secretary for the Springfield Outdoor Advertising Company. Both sons preceded their mother in death.)

These days, Pencil spends much of his time reminiscing about his family, his career as a diesel mechanic and his travels.

“My wife and I went all over North America: the United States, Canada, Alaska, Mexico — all the way to Guatemala,” he said. And on one vacation, they spent 17 days in Hawaii.

“Every year, I would take four weeks off work. We’d get in our car and explore a national park. We’ve been to all of them: Yellowstone, Death Valley, Zion, the Redwoods — every one. My favorite is Yosemite. But British Columbia, oh my! That’s the most beautiful place in the world.”

Over the course of his life, Pencil has owned two small airplanes, four boats and several campers. In addition to his house in Springfield, Pencil and his wife also spent time at their vacation home in Ft. Myers, Fla.

When he was five years old — at the start of World War I — Pencil began helping his father, Elmer, on the family farm in North Hampton.

“My job was taking care of the horses and the hogs,” Pencil said. “You see, we raised about 50 hogs a year. We butchered them on Fridays, and on Saturdays we’d drive them off to market in Springfield.”

Pencil’s grandfather was born in Germany and immigrated to the United States in the late 1800s. Pencil believes his family name is derived from the original German “Benzel.”

“You see, when my grandfather came through [Ellis Island], the immigration folks couldn’t understand what he was saying,” Pencil said. “So they just wrote down something they could figure out and let him on through.”

When it comes to describing a life that spans a century, it’s not easy for a man with so many memories and experiences to pinpoint precise dates. And up until the time Pencil and Ida were married, North Hampton kept no public records. However, it seems that around the time the United States entered World War I (1917), Pencil started school. It was also the year he landed his first job.

“I started going the first year Clark County had centralized schools,” he said. “And they had only one bus. It was a Model T Ford, and it had hard rubber tires. But it couldn’t get to all the farms on account the roads back then were just dirt and mud. So the township paid my dad to drive us kids to school.” Eventually, Elmer passed the job onto his son. Five days a week, Pencil would hitch one of his father’s horses up to a wagon, grab the reins, steer his way down the county’s back roads, pick up his classmates, and cart them — and himself — off to the school house.

“There were six or eight of us in the wagon by the time we got to school,” he said. “And the school rented a barn for the horse while we were in class.”

Pencil didn’t get past the ninth grade. But back in those days it was enough formal education for a smart and enterprising young man to succeed.

By the time Pencil and Ida married — the year the stock market crashed — he was working as a drill press operator for International Harvester. A few years later, he signed on as a diesel mechanic for the National Supply Company in Springfield. Over the years, Pencil designed, built and repaired diesel engines that were used to power factories, locomotives, ships and trucks.

Pencil was well respected in his profession. In addition to the camping trips with his wife, he spent a lot time on the road installing and servicing the engines that had been built by National Supply.

On one occasion during World War II, he was called upon to help assemble a diesel engine that was being transported by barge on the Mississippi River from Peoria, Ill. to New Orleans.

“It took us a long time to get there because we could only travel during the day,” Pencil said. “You see, the river had all kinds of dangerous obstacles, so we couldn’t navigate safely at night.”

Because many of the diesel engines Pencil built were used in newly designed locomotives, he was often invited to attend parties hosted by railroad companies.

“And they were wild parties, with lots of drinking,“ Pencil said. “Back in the day when Atlanta was a dry town, one of the companies had a party in a hotel. And boy, did they have a lot of booze. They filled a whole bathtub full of liquor. Man, you talk about a drunken mess!”

Over the years, Pencil — like most married men — learned to make compromises with his wife. Fifty years ago, in April 1962, his idea of a vacation was to explore the Grand Canyon. However, Ida wanted to go to the Seattle World’s Fair.

“So we made a trade off,” he said. “I took her to the World’s Fair, and then I got to ride a mule train down to the bottom of the canyon.”

Despite all his travels, there is one place Pencil regrets never visiting.

“I always wanted to go to Germany, because that’s where my grandfather came from,” he said. “But I never made it.”

In 2002, Pencil and his wife were honored as the King and Queen of the Golden Wedding Party at the Clark County Fair. In his room at Friends Care Center, he has a framed article of the event on his nightstand.

Pencil attributes his longevity to a few sources: “I’ve lived a clean life, I have faith in God and I’ve always believed most people in the world are good,” he said. “I have so many wonderful memories. But now I’m ready to meet my Jesus. I’m just ready.”