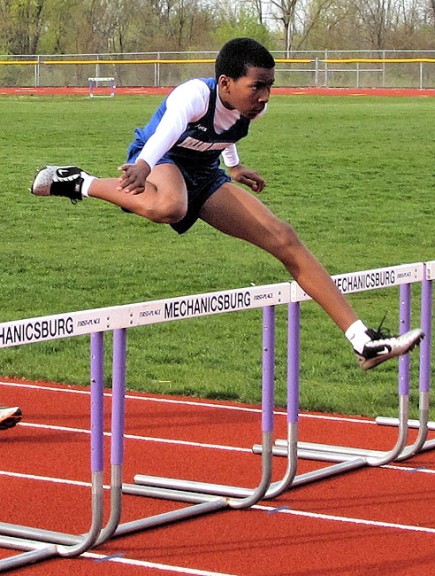 McKinney athlete Kaner Butler hurdled through the course at the track team’s first meet last week. Butler finished in 20.82 in the 110-meter hurdles before taking fourth place in the high jump. (Submitted photo)

Jake Fugate pitched five innings and had nine strikeouts during the YSHS boys baseball team’s first game of the season two weeks ago. The 19–5 loss to visiting Belmont. was YSHS’ first baseball game since 2010.

The Bulldogs later fell 14–4 in their second game against the Springfield Cavaliers. Austin Pence pitched five innings and delivered six strikeouts in the loss.

At the Cedarville Impson track meet last week the Yellow Springs High School boys track team finished 11th out of 18 participating teams even though the team’s ranks were diminished because of spring break.

Antone Truss led the way in the field events, reaching a personal best in the long jump with a first place leap of 21´ 1⁄2˝. He also finished third in the high jump at 6´0 rounding out the scoring for the Bulldogs.

The days lone win went to Brown in the challenging 1600-meter run. Brown broke contact with the competition on the third of the four laps and posted a huge margin of 15 seconds in securing the victory, in 5:42.65. Brown later finished the 3200-meter run in third place (12:33.75).

Allen grabbed her points in the discus where she improved mightily upon the results of her first meet. With a toss of 92 feet and 10 inches on the third of her six throws in the event she was able to place second overall out of 23 girls competing.

Narrowly missing placing was the 4×100 meter relay team of Niki Worsham, Keturah Fulton, AnnDee Pettiford and Allen. The foursome was ninth overall with a season-best time of 59.76. Also competing well in the big meet were Taylor Beck and Christina Brewer.

Last week the McKinney track team opened its season with a strong performance at the Mechanicsburg Invitational meet.

Competing in very windy and cold weather against 13 other schools, the 4x200m girls team of Ayeshia Allison, Julian Roberts, Charlotte Walkey and Olivia Brintlinger won their event in a time of 2:10.02.

There is much work ahead of the team to improve on their hand-offs, but the performance was impressive as the Bulldogs took down many large Division I schools, according to McKinney track coaches Isabelle and Peter Dierauer.

Other outstanding performances were delivered by JC Johnson, who came in third place in the 1600-meter race (5:29.7) and fifth place in the 800-meter run (2:57.82), Charlotte Walkey, who recovered from a month-long illness to race well, and Kaner Butler, who took fourth place in the high jump after crossing 4´10˝.