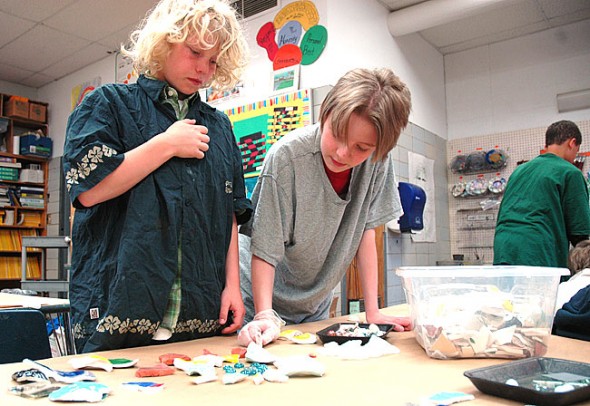 Fifth grade Mills Lawn students Will Mitdbo and Stephen Kaiser-Parlette worked on a joint mosaic project last week, which will soon become part of the newly tiled Mills Lawn School sign at the front entrance of the school. (Photo by Lauren Heaton)

Artist in residence at Mills Lawn—Students redesign their sign

The fifth-grade art students dove into the buckets of pottery shards in muted shades of blue, pink, orange and brown. Soon they had laid out designs using marbles, mirrors, beads and items brought from home, such as a wheel and a matchbox car. They let their imaginations guide their two and a half dimensional mosaics that will soon dress a refurbished Mills Lawn School sign at the school’s main entrance. The project is being led by local artist-in-residence Johanna Smith, who is channeling her love for mosaics to inspire students to use the elements of color, texture, movement and design to beautify the environment around them.

“Look, it’s a pegasus!” Connor McAnerney beamed over his meticulous arrangement of glass and marble.

Others had created trees and suns and abstract designs with the intention of using their work to benefit the aesthetic of the school.

The residency came about by unlikely coincidence. Early this spring, Smith, a mosaic artist, made a pilgrimage to Philadelphia’s Magic Gardens, a series of mosaic installations by artist Isaiah Zagar whose decades-long project to beautify his South Street neighborhood has become a community engagement organization. She felt so moved by the experience that when she returned to Yellow Springs, her first thought was to call the school to see if there was interest in doing a similar community project with the students.

Around the same time, Mills Lawn art teacher Amy Minehart had been trying to figure out what to do with the large number of unused soup bowls her students had made for one of the election night Soup and Souls dinners. A parent had suggested during a PTO meeting the idea of breaking the bowls and using the pieces for an art project. Minehart knew the Mills Lawn sign could use some work, and she was wishing she could find someone with mosaic expertise when Smith called her up and proposed to take on that very role.

But Smith has never installed an outdoor mosaic, and so the school is getting help from local resident Todd Kreeger, who installs tile professionally, and Craig Mesure, who is helping to rebuild the foundation and secure the bedding for the sign. Both are connected to the school, Mesure through his children who attend Mills Lawn, and Kreeger, whose grandchildren are moving to the village and will likely attend the school as well. Smith’s daughter Rebecca also attended the local schools, which gives Smith a sense of purpose in the schools.

Smith herself learned during her trip to Philadelphia that much of her mosaic style had been inspired by Agar’s work, which she has been admiring for years for its rawness and movement.

“I’m not a super meticulous artist — there’s no OCD in me,” she said. “My work is casual and organic, which gives it an energy and effusiveness, which is good!”

Smith taught for many years at an area Hebrew school and has also taught in Montessori schools and public schools, and has been a substitute teacher in the Yellow Springs district as well. She has studied mosaic work for many years and does her own abstract work on recycled materials, tables and plaques, some of which is for sale at Glen Garden Gifts, Eco-mental and Village Greenery.

The students are excited to complete the mosaic on the front lawn of the school. Kreeger has already covered the sign with cement board, and next comes adhesive epoxy and then mosaic installation, followed by grouting and finishing. The mosaic project is expected to be complete this spring.