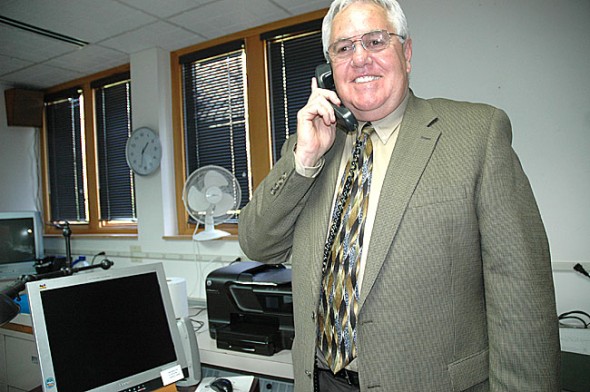 Former Beavercreek Police Chief Art Scott has come out of retirement (for the second time) to take the position of interim Yellow Springs police chief, following the retirement last week of John Grote. Scott anticipates that his interim position will last three to six months, and he has not yet decided whether to apply for the permanent position. (Photo by Diane Chiddister)

Yellow Springs Interim Police Chief Arthur Scott tried retirement, but it didn’t take. So instead he decided to go to Afghanistan.

Scott spent a year in that country, as an advisor to the man in charge of strategy and policy for the Afghan police force. Overall, he said, “Sometimes it was fun and sometimes scary. It was the experience of a lifetime.”

When Scott returned to the United States in 2010, he spent a year fixing things at his house. After that, he was ready to dive into the work world again.

This week, Chief Scott begins the newest installment of his post-retirement life, as interim police chief in the village. He takes the place of John Grote, who worked for the Village force for 25 years until retiring the end of March.

Scott brings to the local force a lifetime of experience. His work in law enforcement began in Lebanon, where he worked as a patrol officer and sergeant for 15 years, then seven years as chief in Milford, east of Cincinnati. Next he was chief at Mason for five years, followed by seven as chief in Beavercreek. He has also been on the board of directors of the Ohio Association of Chiefs of Police, including serving as that board’s president for a year. And since the beginning of his career, he’s been active with the Commission on Accreditation for Law Enforcement, and has been part of a team assessing 40 different departments in their bids for accreditation.

Chief Scott also brings to the job an appreciation for Yellow Springs, he said. That the community is unique can be clearly seen by the nature of the Women’s Voices art exhibit in the hall of Bryan Center, according to Scott, referring to the number of nudes in the exhibit. And he also appreciates what he perceives as the close-knit nature of the village.

Especially, Scott feels confident that he can deliver the sort of community-oriented policing that the village came to expect under Chief Grote, and before him, Chief Jim McKee.

“It’s not being soft on crime, but a way of conducting relationships,” he said of community policing. “It’s not a program, but an attitude, how each police officer responds to the needs of the community.”

Most people are less concerned about a bank robbery, such as the one that took place recently in Yellow Springs, as they are that police address the needs in their neighborhood, according to Scott.

“Most of what an officer does is little things, but those things are what make the difference,” he said.

Raised in a rural area outside Lebanon, Scott didn’t plan on working in law enforcement. He had a job out of high school in the factory at NCR, which was held for him when he spent a year in Vietnam after being drafted. But when he returned to NCR, he discovered that he could longer “be tied to a machine,” after the more diverse work he’d had in the military. A friend in the Lebanon police department suggested he apply, and he soon he was wearing a police uniform. At the time, he said, someone inexperienced had up to a year to receive police training, and, “I found myself too often working the streets by myself without any training.”

But he also found that he loved the job, especially the diversity of each day.

“Every day is different,” he said. “There are different people, different challenges. I thought I’d found the perfect job for myself.”

Scott received training at the Warren County Police Academy, then went on to get a bachelors and masters in law enforcement from the University of Cincinnati, going to school part time for 12 years on the GI bill. He also graduated from a three-month course at the FBI Academy in Virginia.

Working in law enforcement offered the satisfaction of serving the community, Scott said, and also helped him to relate to people in a way he wasn’t used to.

“I was very shy, and this job helped me to come out of that,” he said. “It helped me communicate better and be more accepting.”

It’s been a good, satisfying life, and Scott agrees with the saying that, if you love your job, you never have to work a day in your life.

Because he has never liked retirement, Scott isn’t ruling out applying for the permanent police chief job. He’ll wait and see how the interim position goes, he said, then decide.

As the interim chief, Scott expects to be working for three to six months, until the Village hires a new manager, who will then hire the new permanent chief. In that time, he will continue to make the 30-mile drive every day from his home outside Lebanon, a drive he enjoys because it’s all on country roads.

As a rookie policeman, Scott started out in a small town, but aspired to work in bigger places. He ended up doing so, but now has come full circle, and is very pleased to come back to work in a village.

“I later realized that small is good, and it’s good to get back to small,” he said. “This is a place I’ll enjoy working.”