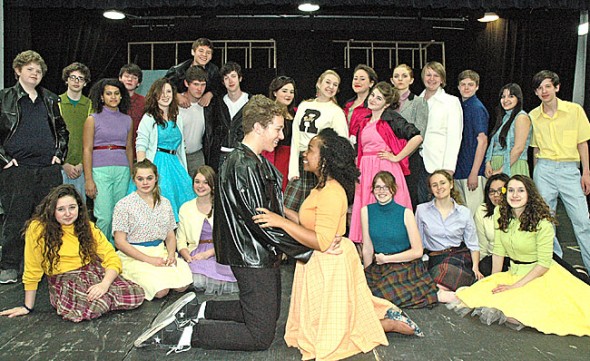 The Yellow Springs High School spring musical, Grease, will be presented this weekend and next at the Mills Lawn gym, with performances Friday and Saturday at 8 p.m. and Sundays at 2. This Saturday, April 14, the Yellow Springs High School Theater Arts Association presents its annual Curtain Warmer fundraiser, with food and drink at the Morgan House, beginning at 6:45 p.m. Tickets are $25. (Photo by Megan Bachman)

Performing in theater helps students feel a part of a team, learn to memorize lines and organize information, respect deadlines and, by acting as humans who are different than themselves, develop empathy, according to Moira Laughlin of the Yellow Springs High School Theater Arts Association, or YSHSTAA. It also helps young people build self esteem by performing in front of an audience. And above all, it’s fun.

“I was in the drama club in high school and it helped me go from being a shy and reserved person to being very outgoing and much more sure of myself,” Laughlin wrote in an e-mail. “Who wouldn’t want that for their own kids?”

These reasons and more are why a group of local parents and community members have worked tirelessly for the past eight years to keep high school theater alive in Yellow Springs. And their involvement remains critical at a time of financial challenge when many schools, including local ones, have eliminated some extracurricular activities.

“If not for the parent group, there would be no theater program,” said Deb Henderson, who, along with Laughlin and several others, serves on the board of the YSHSTAA.

Parents and other YSHSTAA members help keep theater alive in the school in a wide variety of ways, including selling tickets, producing and selling refreshments, writing publicity, making costumes, chaperoning rehearsals, and, along with the students, trying to cover all the endless details involved in a theater production. For a non-parent like Deb Henderson, the longtime head of costume design at Wittenberg University who became involved because she simply loves theater, the amount of work shouldered by parents and other community members is astonishing.

“There’s way too much work involved if we didn’t believe in this,” she said.

Along with their time and energy, parents also give financial support, and for this they rely on help from the community. Especially in the last few years, as local schools have cut funding for some theater productions, the group’s fund-raising has proved essential. And one of the YSHSTAA’s main fund-raisers, the Curtain Warmer, will take place this Saturday, April 14, from 6:30 to 7:45 p.m. at the Arthur Morgan House. The cost is $25 per person.

After partaking of hors d’oeuvres, desserts and sparkling wine, Curtain Warmer participants will walk across Limestone Street to enjoy the YSHS Drama Club’s production of Grease, the school’s spring musical.

“If a person enjoys the theater, you can’t have a better theater experience than this,” Henderson said. “You can take advantage of good food, friends and a really happy play, performed by people you know.”

For the first time this year, those who haven’t pre-registered may still show up at the Morgan House door, pay for the ticket and take part, although it’s helpful for organizers to know in advance how many will attend. Those who plan to go can call ahead to 767-7766.

A huge crowd-pleaser when it came out as a 1978 movie starring John Travolta and Olivia Newton-John, Grease tells the story of two star-crossed lovers in the retro world of 1958 at Rydell High, with Newton John as good girl Sandy Olsson, who falls for bad boy Danny Zuko, played by Travolta. The film, based on the 1971 musical, features many well-known songs, such as “Summer Nights,” as well as memorable dancing.

“It’s classic Americana, and lots of fun,” Henderson said of the play.

In Yellow Springs, Ben Green plays Danny Zuko and Zyna Bakari plays Sandy. Other lead roles are played by Rory Papania, Talia Boutis, Wade Huston, Cole Edwards, Naomi Guth, Lucy Callahan, Ali Solomon, Bear Wright and Dora Perini. The play runs this weekend and next at the Mills Lawn gym, with performances at 8 p.m. Fridays and Saturdays, April 13, 14 and 20 and 21, and 2 p.m. on Sundays, April 15 and 22.

Students and parents are in high gear this week, finishing up the final details of the play. For longtime YSHSTAA member Jerome Borchers, that means putting finishes touches on the set, along with an 8-foot extension of the stage. Part of the joy of being involved in the YSHSTAA, he said, is working with young people and teaching them new skills, such as carpentry.

Borchers is the longest term member of the YSHSTAA, a group that currently includes, besides himself, Henderson and Laughlin, Georgia Lindsey, Daniele Norman, Libby Rudolph and Kelly Callahan. A parent of three, he became involved about 10 years ago, in what turned out to be a time of crisis. The high school drama students’ longtime use of the Antioch College theater building had ended, and Center Stage had just closed. The only venue left in town appeared to be the stage in the newly completed gym at Mills Lawn School, which had none of the extras needed for theater, such as special lighting or sound. And while lighting could be rented, it was extremely expensive and the rented equipment never showed up until the last minute, so that the kids couldn’t get used to it before the play began, according to Borchers. So the parent group decided to purchase lighting instead, organizing the first of eight annual Curtain Warmers to raise funds. After several years, they had the $8,000 they needed, and purchased their new lighting system.

As well as now having a safe and sophisticated lighting system for the young people to use, the parent group aims to make whatever equipment they purchase available to adults as well, Borchers said. They hope to add more lights and some sound equipment.

“Little by little, we hope to make it easier for the community to put on theater,” he said.

As well as purchasing the lighting system and some sound equipment, the group has also purchased a projector, which for this play will be used to project images of ‘50s and ‘60s scenes on the back wall.

“We’re like boosters,” Borchers said of the parent group. “We try to help out where we can.”

Years ago, the school system funded directors for the spring musical, as well as the fall play and the winter one-acts. However, as the district tightened its belt, some of those positions have been eliminated, and now the district only hires the spring play director, along with a musical and tech director for the production.

All the other expenses are covered either by the YSHS Drama Club, the high school student club that, using proceeds from ticket sales, purchases the rights to the plays and covers set construction costs, or the YSHSTAA board, which tries to determine capital needs and cover those expenses.

While the YSHSTAA hopes to raise funds at this Saturday’s event, the group also believes the event serves an important community-building purpose. The Curtain Warmer, according to Borchers, is a time when YSHSTAA members can build bridges with the community, and perhaps that’s as important as raising cash.

“I’ve come to understand that while we raise some funds, the greater impact is having a chance to talk to people who care about theater,” he said.