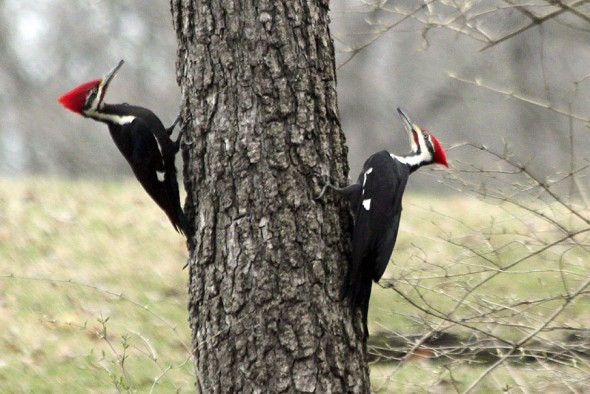 The pileated woodpecker is one of the 85 bird species tallied last Saturday at the annual "Make It Count for the Birds" fundraiser for Glen Helen. The event raised about $10,000 for the nature preserve.

Make It Count for the Birds counts for the Glen

About 25 birders showed up in bad weather last Saturday, May 5, for Glen Helen’s annual bird tally, Make It Count for the Birds.

The 24-hour-event, a fundraiser for the nature preserve, is the time when bird watchers identify all the different bird species they see during a day’s worth of activities, starting with a 5:30 a.m. dawn chorus and continuing through the afternoon, with hikes in the Glen and the south Glen wetlands.

“We landed right in the middle,” Glen Director Nick Boutis said this week about the count. The participants identified 85 bird species during the day’s events, a number midway between the annual count’s lowest tally of 80 and highest of 90.

A new species added this year is one that “I’m humbled to say we haven’t found before” during the count, Boutis said, and that bird is the pigeon. Now the pigeon has officially been added as a Glen resident.

While the number of bird watchers was a bit lower than usual, the event did benefit from an enthusiastic group of sponsors, according to Boutis, who said it raised about $10,000 for the Glen.

“For us it’s about science, but it’s also about land stewardship in Glen Helen,” he said.